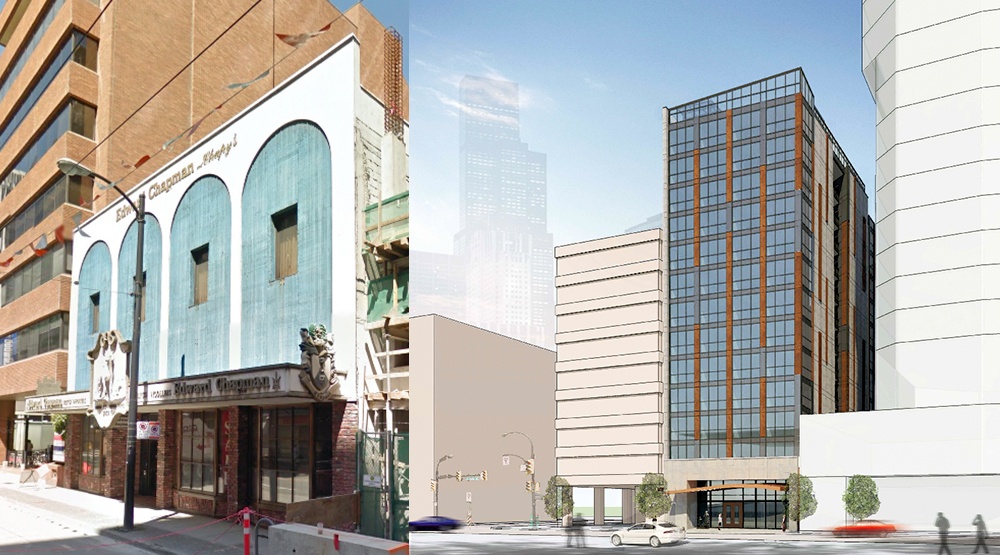 Exterior of the Edward Chapman building and a rendering of the proposed hotel building. (Studio One Architecture / Google Maps Streetview / Daily Hive composite)

A tiny site in downtown Vancouver that is currently the location of the Edward Chapman building could be redeveloped into a 13-storey hotel operated by Executive Hotels & Resorts.

The hotel chain acquired the 6,235-square-foot lot, with a narrow 52-foot-wide street front facing West Pender Street, last year and intends to redevelop it into a hotel with 106 rooms. There will also be a restaurant on the ground floor and a rooftop patio area for guests.

Given the site’s constrictions, just nine parking spaces, accessible from the lane way, for valet parking are planned. 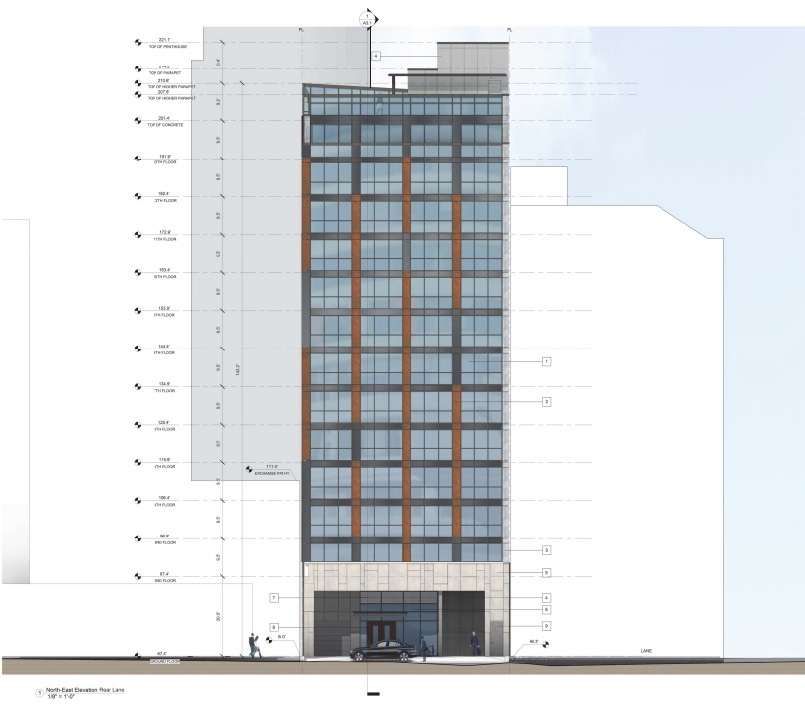 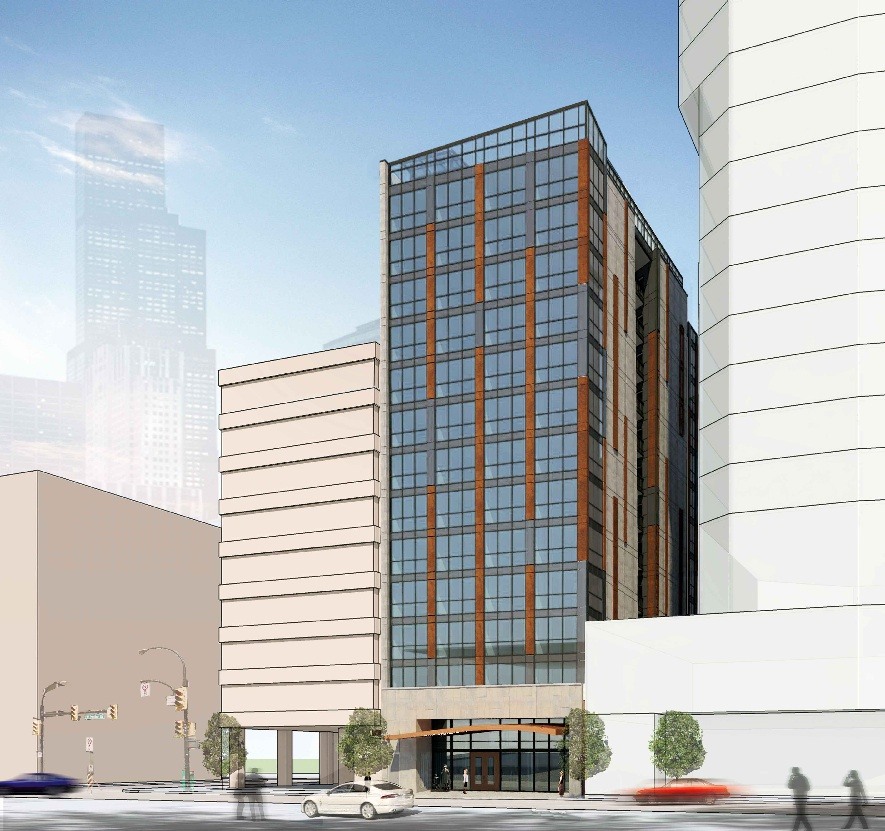 Overall, the building will have a height of 154 feet, which is considerably shorter than the adjacent towers: Jameson House is 391 feet tall while the nearly-complete Exchange tower development is 382 feet tall.

As the site is currently under Downtown District (DD) zoning, the application is “conditional” and therefore may be permitted, but it still requires a decision by the municipal government’s Development Permit Board. 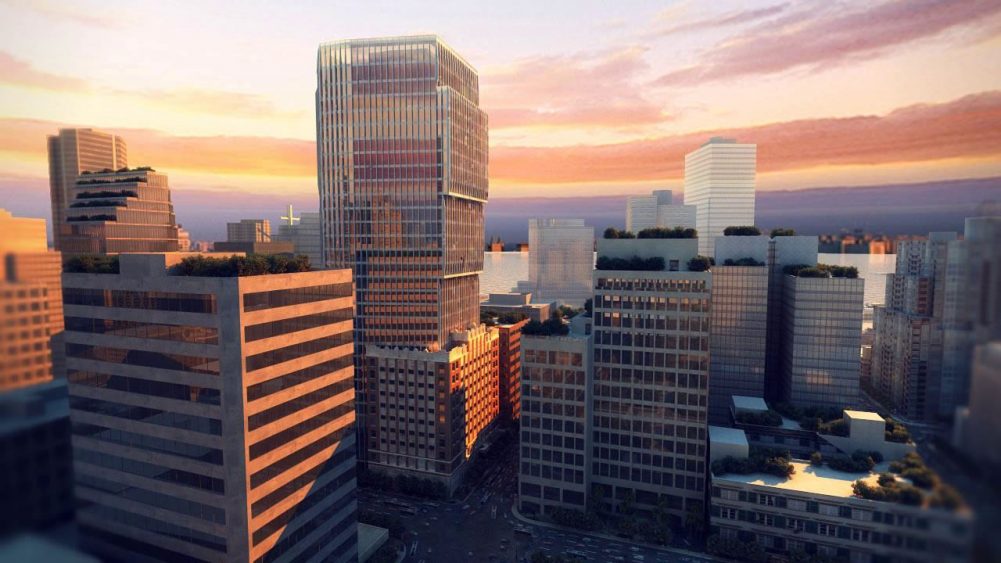 Right next door to the Edward Chapman site, the 31-storey Exchange tower is set for completion later this year, but construction may continue for a longer period of time inside to outfit the lower floors into a hotel.

An application was submitted to the City of Vancouver earlier this year to convert the development’s 1929-built Old Stock Exchange heritage structure, floors two through 11, from office to hotel uses.

This will entail the removal of 110,000 square feet of office space from the 369,000-square-foot AAA office building to fit in 202 hotel rooms and guest amenities. The newly built floors above the heritage structure, the floors above the 11th floor, will remain as office space.

Both hotel projects would provide much-needed accommodations capacity to Vancouver’s booming tourism industry. The city saw a record 10 million overnight visitors in 2016, and hotel room occupancy reached a high of 94.1% during the summer.

Two new hotels – Marriott’s the Douglas and JW Marriott – will open at the Parq Vancouver casino resort complex next to BC Place this fall, providing a combined 569 hotel rooms.

A 120-room hotel is also proposed for the former archdiocese headquarters on Robson Street near BC Place.

However, some hotel room supply will be lost from the anticipated closures of the Empire Landmark Hotel and the Coast Plaza Hotel in the West End.

In January, Executive Hotels & Resorts announced that it would be reopening Splashdown Park in Tsawwassen and performing extensive retrofits and expansions on the attraction, including additional water play and entertainment facilities as well as an adjoining boutique hotel.