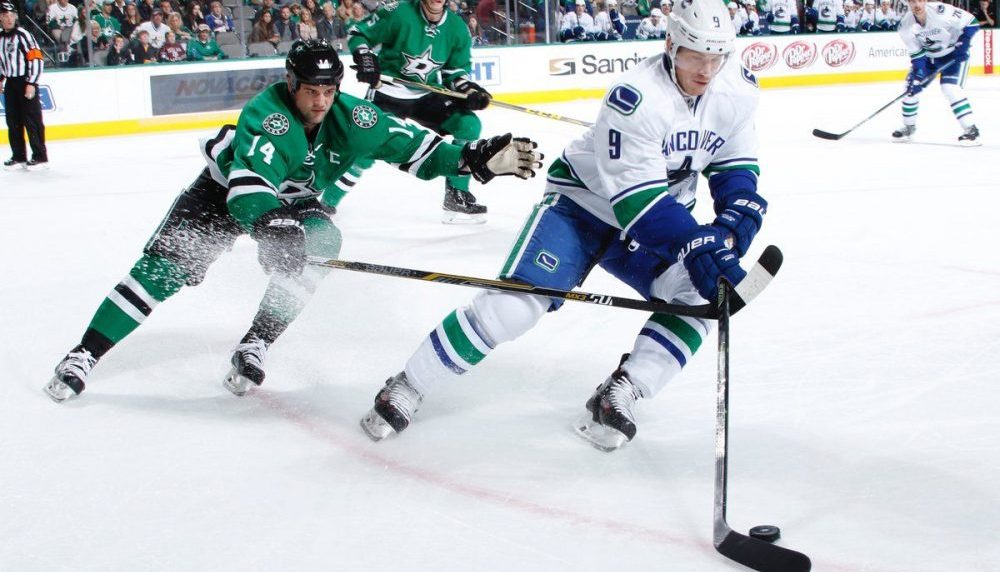 The Canucks were in Big D on Friday taking on the Stars in the second of a three-game swing on the road. They play the final game tomorrow in Colorado.

It started out promising with an early goal, but the Canucks couldn’t build on it and a strong 30-save game from Antti Niemi sealed their fate as they dropped a 2-1 decision to the Stars in Dallas.

After hardly leading at all in their first fifteen games of the season or so, the Canucks have started to buck that trend.

Tonight marked the third game in a row (only fifth time this season) the Canucks got the first goal of the game. Bo Horvat found Jayson Megna, who used his speed to get in tight before outwaiting Niemi for the goal.

The Canucks were shooting against Niemi, who got the call in net for Dallas. It’s the 11th time in 21 games this season the Canucks have faced a team’s backup goalie, meaning it’s actually the norm to face the opposition’s secondary goaltender.

Granted, Kari Lehtonen hasn’t exactly established himself as the team’s starter with an .884 save percentage in 13 starts this season. They’ve really got goalie problems in Dallas.

Of course, one goal was never going to be enough against an offensively strong Dallas team, and the Stars stormed back with a pair of goals in the middle frame.

First, it was a shot that redirected off Radek Faksa and fooled Miller to tie the game at one.

The Canucks argued that icing should have been called on the play, but on the replay it just looked like Erik Gudbranson got beat to the puck.

A handful of minutes later it was Esa Lindell taking a pass and snapping it past a screened Miller for his first ever NHL goal.2

That left the Canucks down one heading into the third, but against the Stars goalies, anything is possible.

With the Canucks trailing, they went to work in the third and in the end fired 14 shots on goal in the final frame, but just couldn’t beat Niemi.

The Canucks outshot the Stars 31-28 in the game but Niemi stood tall with 30 saves and just one goal against. It was a lot different than the goaltending performance the Stars got the last time these teams met.

Can we face Kari Lehtonen next time please?

It was another solid game for Troy Stecher tonight, especially in the final two minutes when the Canucks went 6-on-3.

While Alex Edler was shooting pucks into shins, Stecher was actually getting his shots through to the net, forcing Niemi to make saves and creating more than a few big rebounds that never got capitalized on.

Stecher gets two things: the puck to the net, and my undying love.

He finished the game with four shots and a +1 rating in 22:21 of ice time, and continues to make a strong case to stay on the team even once Philip Larsen and Chris Tanev get back from injury.

It was a quiet game tonight for the Sedin twins, and another point by Horvat now has him alone at first in Canucks scoring.

The Sedins have finished one and two on the Canucks leading scorers every season since 2006-07, so seeing someone challenge them offensively is extremely refreshing, especially when it’s a young exciting player like Horvat.

The Canucks have recently made their intentions public about wanting to sign Horvat long-term, which would be a really wise decision. He’s alright a key part of this team, and his role will only grow moving forward.

The Canucks have less than 24 hours now to put this loss behind them and get ready for their next game in Colorado against the Avalanche.