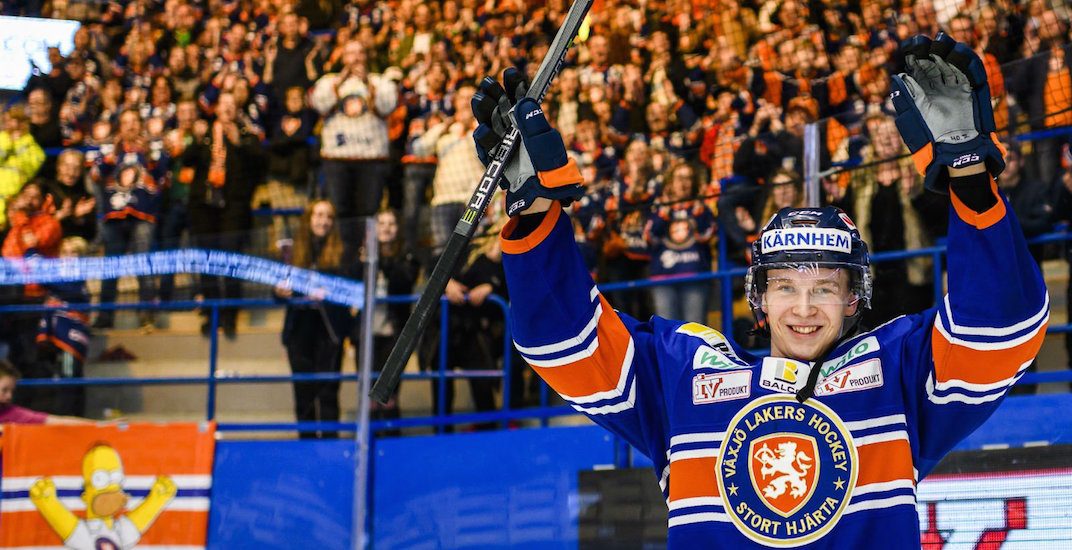 Happy and excited to sign my first NHL-contract. A dream come true! I want to thank everyone who helped me along the way and especially my family. I couldn’t have done it without you. pic.twitter.com/NXTBLO1xBc

The Vancouver Canucks put pen to paper with their prized 19-year-old prospect (luckily his injured thumb is on his left hand), officially signing Pettersson to a three-year entry-level deal on Friday.

“Elias is a talented offensive player with tremendous vision and skill,” said Canucks general manager Jim Benning. “Like most Canucks fans we watched with excitement the incredible season he had in Sweden. This is an important offseason of training and development for Elias and we expect him to be ready to challenge for a roster spot in training camp.”

The Canucks’ first rounder from last year went on to be named MVP, playoff MVP, Rookie of the Year, and Best Forward.

On the international stage, Pettersson tied for fourth in tournament scoring with seven points in seven games for Sweden at the World Juniors, winning silver. He wrapped up the season by scoring three points in five games for Sweden’s gold medal winning team at the IIHF World Championships. He injured his thumb, which required surgery, but was able to join his teammates for the celebration on the ice – and the rally that followed in Stockholm.

The signing of Pettersson will ease the concerns of Canucks fans, after rumours ran rampant last week that he might choose to stay in Sweden for another season. Though immensely talented, Pettersson has some filling out to do on his 6-foot-2, 165-pound frame.

Though he is eligible to play in Utica next season, Pettersson is a good bet to start the season in Vancouver.