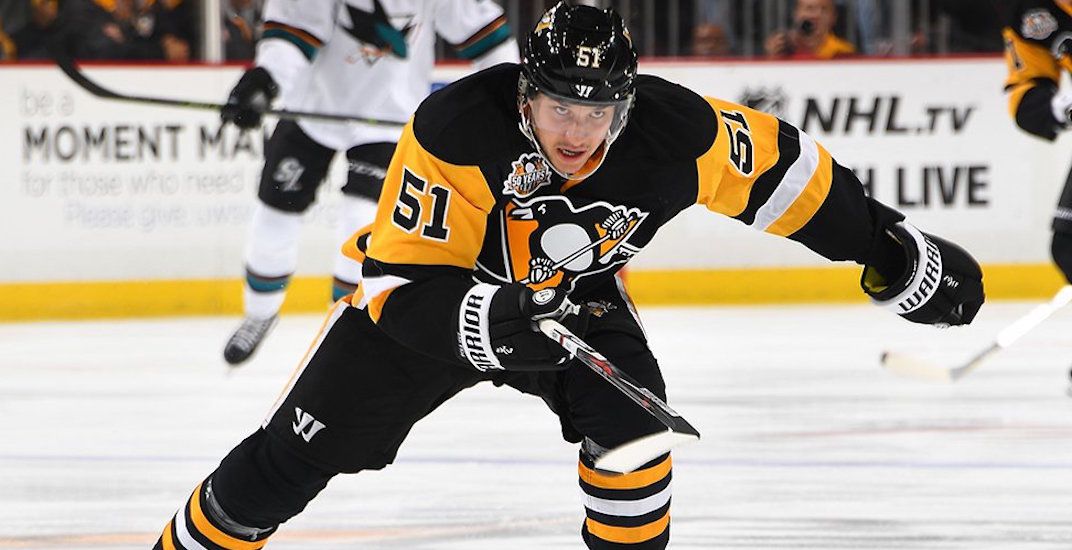 The Vancouver Canucks have acquired 23-year-old defenceman Derrick Pouliot in a trade with the Pittsburgh Penguins. In return, the Pens will receive defenceman Andrey Pedan and a fourth round pick in the 2018 NHL Draft.

Pedan had a solid showing in training camp, narrowly losing out to Patrick Wiercioch and Alex Biega for the final spots on defence. He was placed on waivers yesterday, with every NHL team taking a pass on him.

Pedan, now 24, was acquired by GM Jim Benning nearly three years ago. The 6-foot-5, 213-pound blueliner was capable with the Utica Comets, but didn’t impress management enough to get much of a look in the NHL. Pedan played just 13 games with the Canucks, many of which were out of position as a forward, all coming during the 2015-16 season.

Pouliot is the key to the deal.

#Canucks GM Jim Benning speaking to the media. Said @lordricky51 has been on radar for a while. "Excellent skater, great transition."

A highly touted blueliner coming out of junior, Pouliot is a puck-moving defenceman with a high upside. Drafted eighth overall by the Penguins in 2012, the 23-year-old hasn’t lived up to the hype, appearing in just 67 NHL games to date.

If he’s going to realize his potential, he needs to do it soon.

Pouliot is a defenceman that Green knows well from their days together in junior with the Portland Winterhawks. The native of Weyburn, Saskatchewan was a dynamic offensive force when Green coached him during the 2012-13 season.

Under Green, Pouliot scored 45 points (9-36-45) in 44 regular season games, before adding another 20 points in 21 playoff games. Portland made it all the way to the Memorial Cup Final that season, with Pouliot being named to the tournament’s All-Star Team.

Pouliot improved his total the following season, representing Canada at the 2014 World Junior Championships, and being named the CHL Defenceman of the Year.

What a difference three years makes, as Pouliot is already on the outs in Pittsburgh.

There wasn’t much room for a player like Pouliot on the back-to-back Stanley Cup champions’ blueline, which already has a pair of excellent offensive defencemen in Kris Letang and Justin Schultz. He appeared in two playoff games for the Penguins in 2016, but failed to get into the lineup for the Pens last spring.

Can't thank everyone enough for making today a special day! Extremely honored to bring the cup home to Weyburn! pic.twitter.com/EhpnExFqhy

Pouliot didn’t play many NHL games with the Penguins’ organization despite great offensive numbers in the AHL, scoring 70 points in 114 games with Wilkes-Barre/Scranton.

The 6-foot-0, 208-pound left-shot defenceman should get more opportunity in Vancouver.

Pouliot is a good skater and has the potential to become a power play quarterback in the NHL. The question with him, similar to many other young offensive defencemen in his situation, is can he be good enough defensively to earn the trust of the coach?

*Update: Pouliot will join the Canucks on the ice at practice on Wednesday. To make room for him, the team has placed defenceman Patrick Wiercioch on waivers.