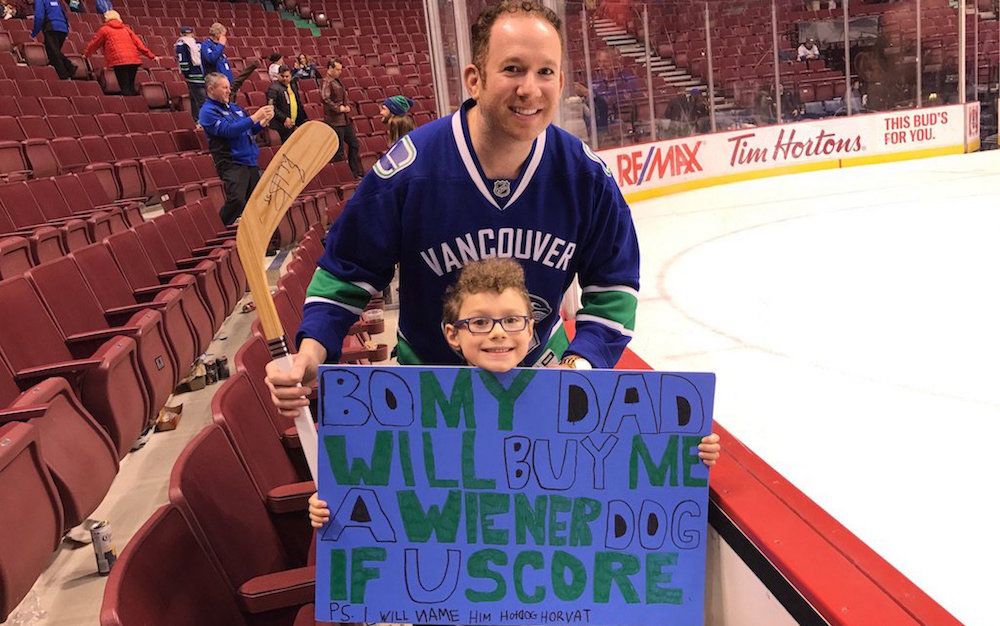 Don’t worry everyone, dad is keeping his word, and six-year-old Adley is going to get his wiener dog.

The sign that melted the hearts of Canucks Nation on Wednesday became the feel good story of 2017 when Bo Horvat scored a beautiful breakaway goal late in a 3-0 Canucks win over the Arizona Coyotes.

“BO MY DAD WILL BUY ME A WIENER DOG IF U SCORE” caught the eye of Horvat during the game, so he knew what the goal meant as soon as the puck went in.

After the game, Horvat was named third star and gave the kid a stick.

What Horvat didn’t see, was the small writing at the bottom of the sign that said “PS I will name him Hotdog Horvat.”

“Oh, perfect,” Horvat said, laughing, after the game upon learning the name from Daily Hive. “Hopefully the kid gets the dog, that’d be awesome.”

Well, good news, as the Canucks have confirmed that Adley is indeed getting the dog.

“Bo’s his favourite player, so it was no-brainer who he’d pick to score,” his dad, Aaron told the Canucks. “Bo messaged us on Instagram and said Adley better be getting a dog!”

Cue the Canucks, who are (smartly) taking full advantage of this story, for the benefit of the SPCA.