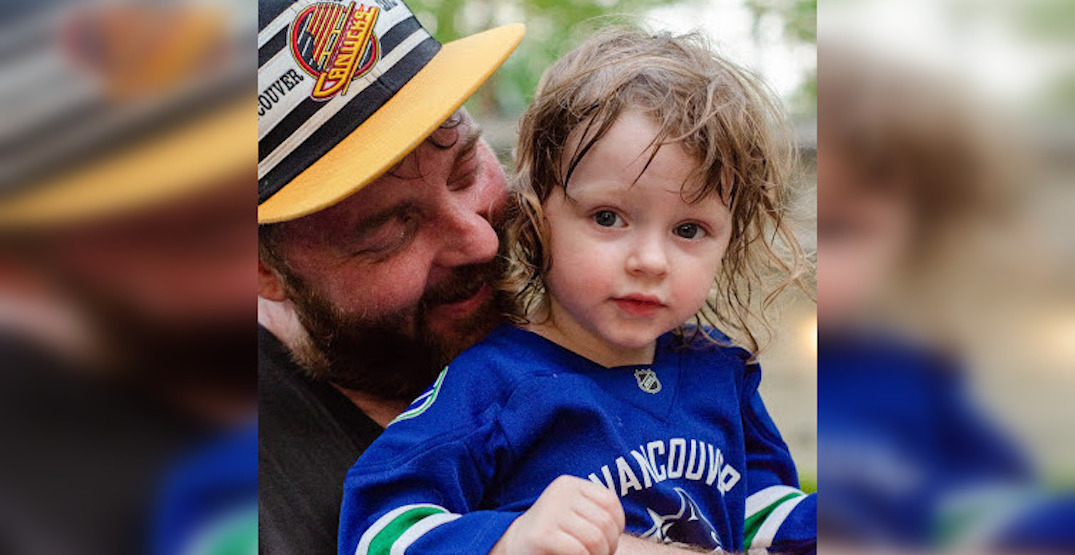 Canucks fan Stu Elmes and his daughter in Thailand (Will Langston)

On Twitter, he’s known as @TheDiscoStu, a polarizing and passionate Canucks fan unafraid to speak his mind.

In real life his name is Stu Elmes, a Vancouverite stuck in Thailand with his wife and two-year-old daughter, trying to get home but unable to for months due to the pandemic.

“Trudeau told us to come home, and we’ve been trying for months,” Stu told Daily Hive on the phone from Chiang Mai, where he has lived off and on since 2010.

“My wife’s employers haven’t paid her in four months. We just want to get back to Vancouver but it’s impossible.”

Stu’s wife, Hayley, continued working for months during the pandemic, with her Thai employer promising to pay her but never doing so. It crippled the couple financially while they attempted to come home.

Moving home from Thailand, where they’ve lived together as a family along with their two cats since 2016, was complicated. Hayley has a United Kingdom passport, and she has been waiting for her Canadian permanent residency application to be approved since October.

“Because our income has disappeared, we have decided that we just need to get to Canada and fight our case from there,” said Stu.

But getting on a flight has been next to impossible. With the Thai government not allowing foreign tourists to enter the country due to the pandemic, there are very few planes landing in Thailand, meaning there are also hardly any planes leaving either.

“The airport is a ghost town,” said Stu.

Flights are still for sale, of course, at heavily marked-up prices. But one by one, they all get cancelled — with airlines and travel websites sometimes taking up to 60 days to provide a refund.

“You book the flight and they’ll take your money, then they email you and say your flight has been cancelled.”

Seemingly without any options, Stu even tried tweeting at Canucks owner Francesco Aquilini — mostly in jest — to help fly him home.

@fr_aquilini I’m your biggest supporter. Help me and my wife/daughter/cats get home.

“It was mostly a joke, but somewhere deep down I was hoping that he’d be like, ‘Alright, I’ve got this jet sitting here, it would be really good PR for the Canucks.’”

Instead, it has been fellow Canucks fans that have stepped up to help their stranded teammate.

A GoFundMe page titled “Bring DiscoStu Home,” raised over $5,000 in the first eight hours after it became public.

The fundraiser was started by someone who goes by the handle @unsknnybop5 on Twitter, who isn’t a close friend of Stu’s. In fact, they’ve never even met.

“I’ve never met him, I have no connection to him aside from the fact that we tweet about the Canucks… but he decided to do it, which is awesome,” said Stu. “It’s not a great feeling to be asking people to help you, but we just don’t know what else to do.”

Stu has been feeling the love from Canucks Twitter — a community of fans that’s not always viewed in a positive light.

“It’s amazing… I’m not the most pleasant human in the world… my Twitter persona is not Mr. Nice Guy.”

“People have been really really cool. Even people that actively dislike me have been like, ‘I don’t agree with anything this guy says, but help him out.’”

Getting home to Vancouver has been the family’s focus since March, but for Stu, there’s now a little bit of extra motivation.

The Canucks begin the postseason on August 2.