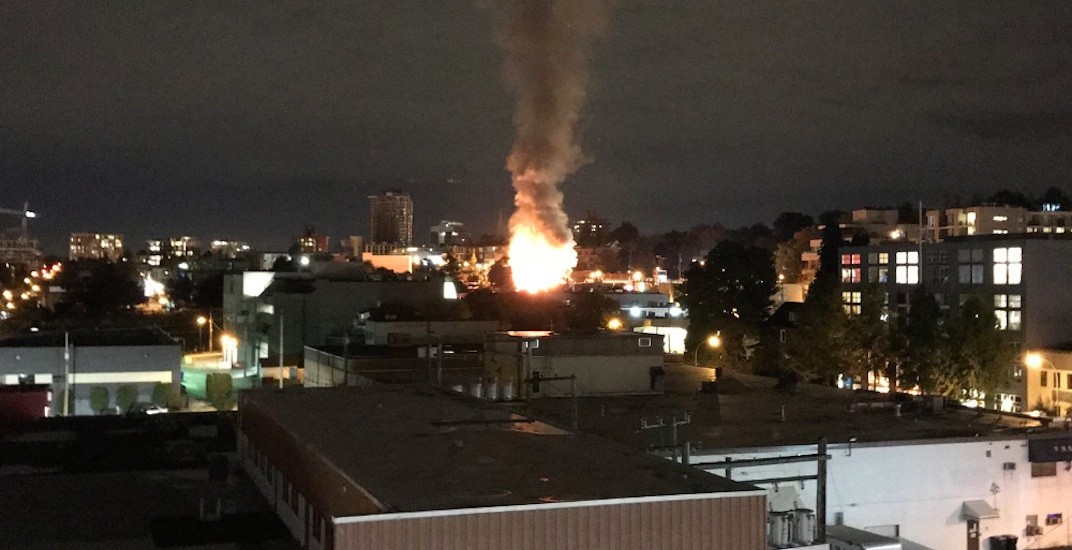 UPDATE: The fire has been extinguished and West Broadway has fully reopened.

Traffic is not flowing through West Broadway between Cambie Street and Main Street in Mount Pleasant due to a major fire at the African Arts and Percussions building.

The blaze at the musical instrument store at 163 West Broadway began shortly after 9 pm Sunday.

Multiple engines from Vancouver Fire Services are at the scene fighting the blaze. Police are also present in the area managing the road closures in both directions between Main and Cambie.

Transit riders should expect significant delays due to bus route detours. The No. 9 trolley will travel through downtown Vancouver via Main, Pender, Homer, Cordova, Cambie, Nelson, and the Cambie Street Bridge before continuing its regular route on Broadway.

The 99 B-Line will take Quebec, 2nd Avenue, and Yukon before returning to Broadway. The Canada Line’s Broadway-City Hall Station is unaffected.

A large area of the neighbourhood is currently in the dark due to the fire, according to BC Hydro. Over 2,400 customers are affected.

Mount Pleasant power outage area due to fire. (BC Hydro)

At one point, flames billowing out from the building were several storeys taller than the three-storey heritage structure.

This is the second significant blaze in Mount Pleasant in less than two weeks.

Heard a loud bang and saw flashes from our window. Ran out in my undies. #VancouverFire on Broadway pic.twitter.com/6g9owsbrYL

Many firefighters hard at work to put out the fire. There’s at least 5 firetrucks. #vancouver #fire pic.twitter.com/NfRveHslDA

Huge fire at W Broadway and Columbia right now on the West Side… 😰😰 #vancouver #fire pic.twitter.com/GHGrmu8urx

Another huge fire in Mount Pleasant. Heard some explosions and then looked out to see this going on. #Vancouver #vancitybuzz @CBCNews pic.twitter.com/trV0lA9rLG