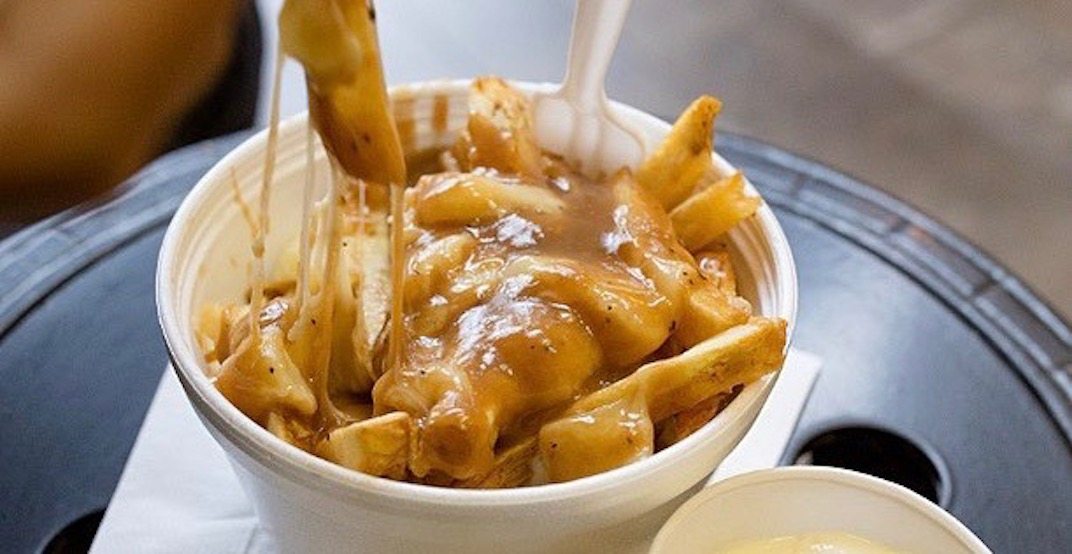 Inarguably the greatest of Canadian inventions – no, we’re not talking about basketball or ketchup chips – it’s the grandest of combinations: poutine.

Part french fries, part cheese curds (“squeaky cheese” if you’re proper), and part gravy, poutine is a staple and can be found at eateries all over the world.

Poutine came to be in the 1950s but fought against a perception of it being a profane and untraditional mockery of Quebec gastronomy.

These days, however, the poutine is celebrated across Canada, and even the globe, as the monumental creation has been used to combine all manner of ingredients.

Poutine competitions and festivals devoted to the French-Canadian dish have sprung up in every part of our country. We in Vancouver are no stranger to adventures in fries.

In local spots, you will generally find two different types of people, those that are trying to reinvent the poutine (either through crazy inconceivable combinations of topics or by replacing any combination of the three basic ingredients) and those that are attempting to further perfect the traditional way poutines are made.

Either way, it’s a veritable smorgasbord for us poutine lovers.

Wave that cheese curd flag high, here is a list of where to find the best poutine in Vancouver.

As an aficionado of the gravy and cheese mountain, Frites is the one place you absolutely have to try if you’re in town. If you’ve only got one shot to impress, head to the small and open very late spot to grab the best gooey bucket of fries. The fry house also has a large list of dips to indulge in as well, so don’t spare any expense.

One of Vancouver’s best poutine houses is also extremely traditional. For an authentic Quebec taste, head to the second Davie street poutine shop on this list. Even better still, La Belle has an amazingly varied menu, and they offer a twenty dollar all-you-can-eat poutine.

This Japanese cafe and restaurant tucked away in Marpole has some traditional curry recipes. But the best reason to head to this South Granville spot is the poutines. The little shop with a handful of tables replaces the classic gravy with either Japanese curry or Japanese stew. Either is amazing, but the curry is top tier.

For a quick, cheap, and tasty poutine, the Costco food counter is a great choice. Much like their Hot Dogs, Costco knocks it out of the park with their simple ingredients, quick service, and cheap prices.

A classically-inspired, nationwide spot, Smoke’s poutinerie begins with traditional French-Canadian ingredients, but quickly bursts through the roof with their eccentric additions to the poutine game.

Though Frenchie’s is atop most lists for the best Montreal smoked meat sandwich in town, that’s not the only thing they brought over from the province of Quebec. Their classic poutine is fresh and includes the traditional squeaky cheese curds that people come to expect from a real poutine but with that beautifully crafted Montreal smoked meat.

Opening just a few years ago, next to the Stadium Skytrain Expo Boulevard entrance, this Korean-Mexican fusion offers plenty of amazing mixes of cuisine, but the best of all is their kimchi or bulgogi poutines.

Just around the corner from the Granville Strip on Nelson is the Mean Poutine shop, and it serves one of the best simple additions to the poutine game that Vancouver diners have had. Their buffalo chicken poutine is every part delicious hybrid and deserves to propel Mean Poutine to a spot on this list on its merits alone.

The ever-popular spot for vegan deliciousness, Meet has a few locations around Vancouver now and will blow your mind with their Butter (NOT) Chikkin Poutine. Pair it with some of that natural ginger beer, and you’d be hard-pressed to find a comparable alternative. We also suggest you try the TeeM Poutine with creamy cashew gravy.