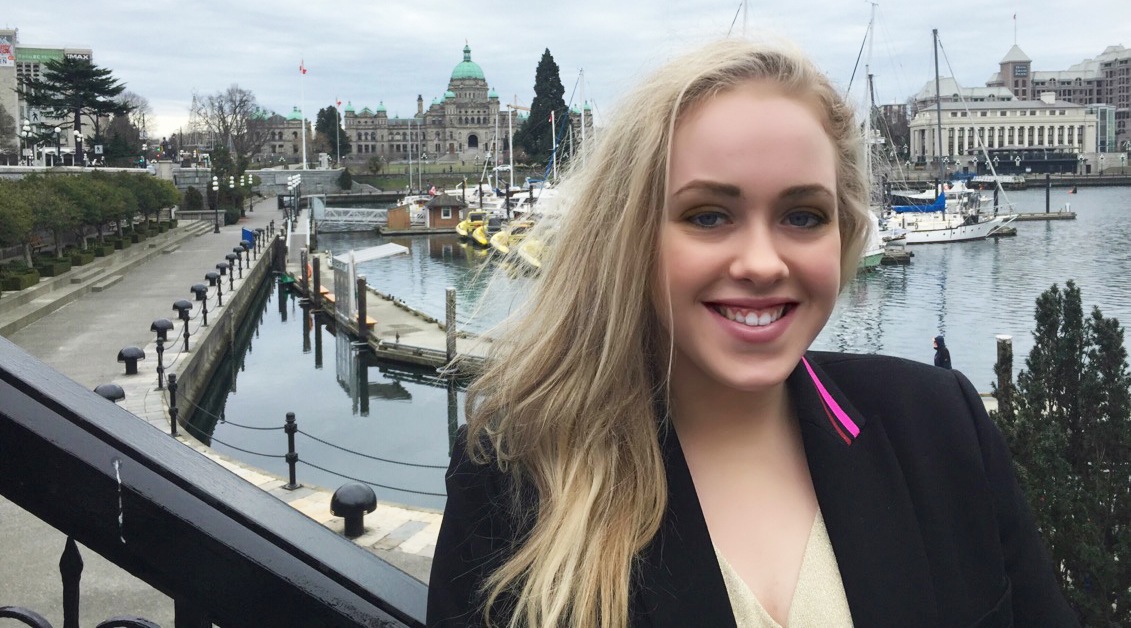 Currently spending my 8-3 as a high school senior. I will be studying political science and pre-law in the Fall. In my spare time, I am a high-performance, post-secondary recruited athlete in both Volleyball and Rowing. I volunteer with various charitable organizations and have over 4,000 volunteer hours in roles varying from Director of Social Media and Analytics Officer to coaching volleyball at the Richmond Olympic Oval. I head a Servant and Leadership Team at my high school, where we are involved in school community initiatives and service projects. I am also a member of the marketing committee for my Grad Legacy team and captain of the senior girls volleyball team. [For the record, Madison is also a member of the BC Young Liberals.]

No, this will be my first time.

I’m all about exercising my right to vote! Of course.

In general my family tends to agree on most everything and I’ve always been encouraged to fight for what I believe in. Politically speaking, I became immersed in the world of politics a year ago. I found that politics is something that is so personal, yet is something that is often overlooked or seen as intimidating. Ultimately, it is up to an individual to do their own homework in regards to policy, personal stance and more specifically, general platform before making a decision on their party tilt.

My family’s political preference, like many, most definitely set a foundation of values and important issues prior to my political engagement. Before I officially committed to a provincial party, I spent quite a few nights researching and comparing each major political party in addition to taking copious amounts of those infamous, “Which party do you align with most?” tests. Especially for young people, a deep breadth of knowledge regarding policy is by no means a necessity, but realizing issues specific to one’s community and oneself are of importance and most definitely food for thought.

If I was any closer I would probably be running myself.

Yes! I work on a few local campaigns.

Fun fact: I have a (continually growing) candidate button collection as well.

In short, yes. I believe I have the tenacity, empathy and vision to serve and advocate for my community from elected office. I believe the only way to make a difference and create change is to encourage others to get involved in the political process and educate youth.

I have introduced many to the world of youth politics and continually stress the importance of awareness regarding issues that pertain to my peers. Empowering youth to get involved in the democratic process and exercise their right to vote is something I feel is a significant part of being not only a Canadian, but a British Columbian.

Running as a young person can be viewed as bittersweet in regards to associating age with inexperience. I know for a fact that I possess the drive and work ethic necessary to do the job to the best of my abilities by the time I feel compelled to put my name forth.

I wish to be a voice for young women in politics as this is a predominantly male field and strongly believe women serve as an integral part of our legislative process. I’d encourage anyone who possesses the heart, ambition, conscience and willingness to listen to run, regardless of their age, ethnicity, gender or faith background.

British Columbia’s plans to modernize the taxi-industry is an exciting announcement for urban transportation. Introducing alternative resources and creating competition and diversity in the market will be an asset.

Factors such as safety, reliability and consistency should always be top priority and from personal experience I find a handful of cab companies fail to produce that. Through the introduction of ride sharing options, British Columbians will be able to enjoy the benefits of a more abundant supply of transportation and the competition that comes with that.

I think that everyone can agree that being able to take care of those they love is about the most important thing.

Prosperity stems from the hard work of ALL British Columbians all over the province – and government’s job is to make it easier, not harder, to thrive in our province. Recently the government has made groundbreaking investments in various sectors such as health care, education and multiple key services people count on such as creating thousands of new child-care spaces, the ability to give single parents an opportunity to train for new jobs without worry, in addition to bringing in a blueprint for reasonable and foreseeable increases to the minimum wage.

The government’s duty to ensure that all British Columbians have the opportunity to prosper means the government should be saying yes to a growing economy and making sure every British Columbian shares in the benefits— and it seems like we’ve been consistently moving in that direction. Key focuses moving forward will most definitely be strengthening and diversifying BC’s economy through saying “yes” on economic development, making sure the government spends within its means to keep taxes as low as possible, and equipping all British Columbians with the tools necessary to succeed in a rapidly changing economy.

Our province currently leads Canada in both job creation and economic growth and I believe the government should continue to expand this achievement in the coming years. As a province we’ve been able to achieve five consecutive balanced budgets while making historic and sustainable investments in areas such as health care, education and social services, and this is just the beginning.