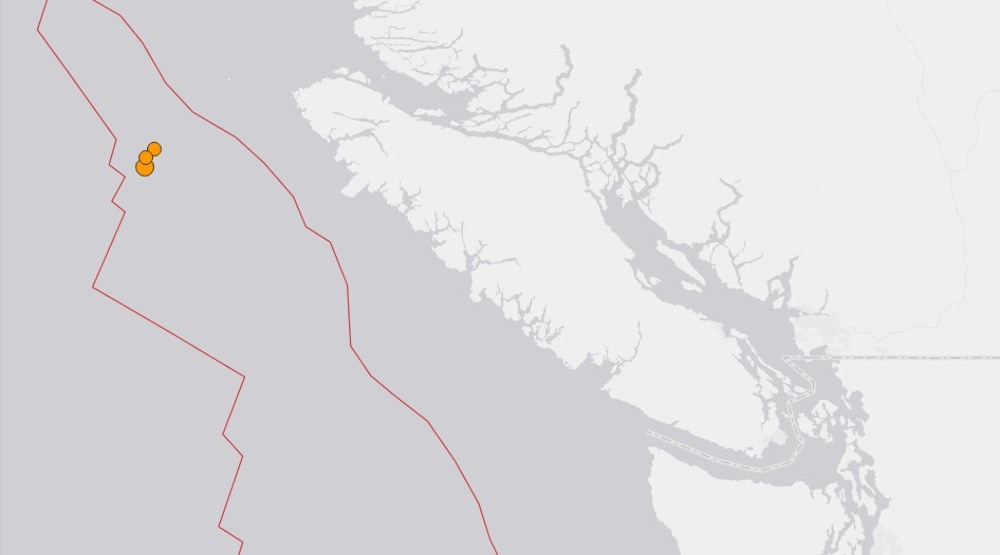 All three earthquakes this morning hit the same area. (Image by: US Geological Survey)

Three modestly powerful earthquakes struck the western coast of Vancouver Island within a one hour period at the same location this morning near the fault line between the Explorer Plate and the Pacific Plate.

The first seismic event occurred at 7:49 am PST and had a magnitude of 5.1, according to the US Geological Survey. It had an epicentre 183 km west-southwest of Port Hardy and a relatively shallow depth of 10 km.

Another tremor was detected less than an hour later at 8:42 am PST, deemed as a magnitude 4.3 event with an epicentre located almost at the exact same area at 175 km west-southwest of Port Hardy and with a depth of 10 km.

And then just minutes later at 8:52 am PST, seismic detectors recorded a magnitude 4.6 earthquake with an epicentre 183 km west-southwest of Port Hardy. Its depth was also 10 km.

It is possible that the first and most powerful seismic event of the series, the magnitude 5.1 earthquake, led to the smaller aftershocks.

Given the magnitudes of the tremors and distance away from land no damage can be expected.

The area where today’s earthquake occurred is a hotspot for seismic activity given that the Explorer Plate is wedged between the Pacific and North American plates. It is slowly being subducted under the continental plate.

The second most powerful earthquake to hit Canada since seismic events were measured using seismographs was the magnitude 7.7 event that hit Haida Gwaii on October 27, 2012, but its impact was minimal considering it was far away from major population centres.

On April 23, 2014, a magnitude 6.7 earthquake that was only 10 kilometres away from the coastline of Vancouver Island and 133 kms northwest of Tofino was felt across the island and the Lower Mainland.