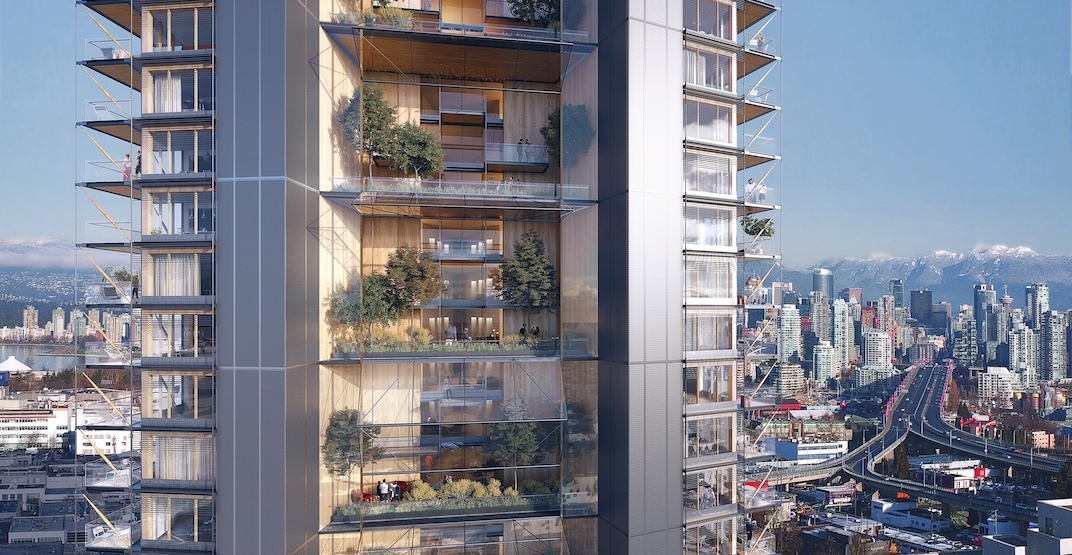 If this mass timber tower is built as originally envisioned, the tallest of its kind in the world, it could set an extraordinary precedent and benchmark for not only green building construction but also the future of development along Vancouver’s Central Broadway corridor.

In an interview with Daily Hive on Wednesday, Bruce Langereis, the president of Delta Land Development, unravelled his company’s proposal to transform a 1.3-acre lot at 1745 West 8th Avenue — the northwest corner of the intersection of West 8th Avenue and Pine Street, just one block away from Burrard Street and West Broadway.

The site is currently occupied by a 1978-built, four-storey concrete building that was formerly the data centre for CIBC, but it is currently being leased as film and television production space.

Five years ago, Langereis began a collaboration with Peter Busby at Perkins + Will Architects on a stunning design that has since been aptly named Canada Earth Tower, which calls for a skyscraper between 30 and 40 storeys with approximately 200 homes, including market housing units plus at least 20% of the residential space set aside for non-market housing, such as rental or co-op housing.

Every three-storey section of the tower’s south face will contain an outdoor garden accessible to residents of the section. 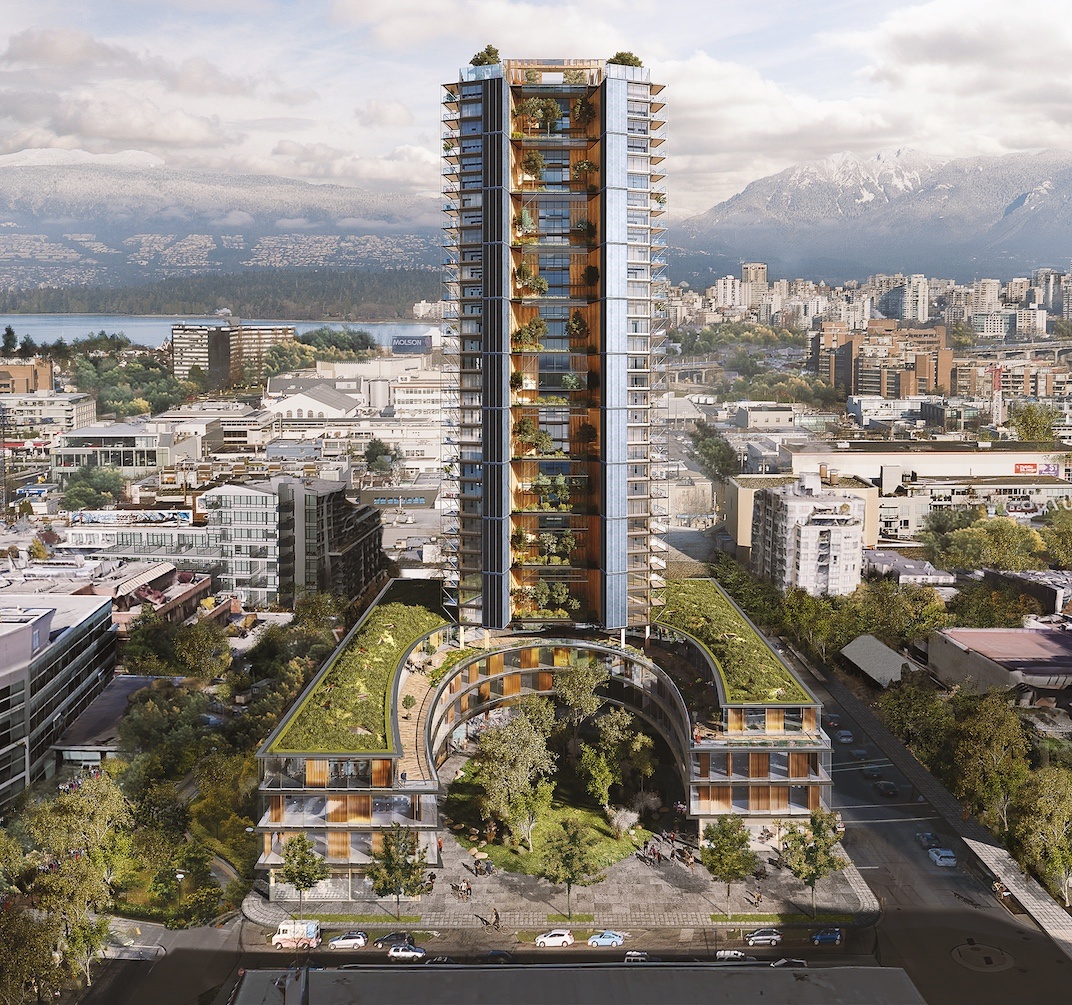 Down below, the podium of the complex would entail premium office space and retail, such as a grocery store. Retail and restaurants will line an expansive horseshoe-shaped courtyard, complete with knolls, that opens up to West 8th Avenue.

Extensive landscaping details will be designed by landscape architect Cornelia Oberlander, who was notably involved with the design of the rooftop of the Central Branch of the Vancouver Public Library and Arthur Erickson’s designs for Robson Square and the UBC Museum of Anthropology.

Altogether, the Vancouver-based developer is aiming for 339,300 sq. ft. of total floor area, giving the building a floor space ratio density of six times the size of its lot. 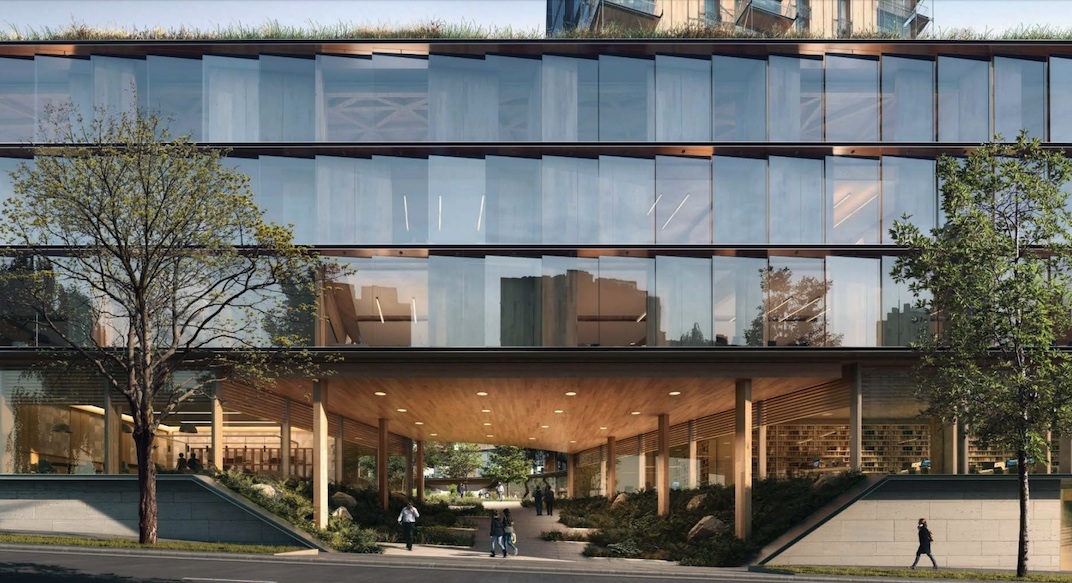 “It’s not going to burn”

When it comes to the tower’s green design aspects, there is nothing like it in the world, especially when its surreal scale is considered.

“I went to Busby’s team and said ‘I have two limitations for you: it has to be financially feasible and practical and acceptable to the consumer. But I want you to be way ‘out’ there, I don’t want you to be guided by LEED, which is now more of a follower than a leader,'” said Langereis, who emphasized the urgent need to act on climate change.

“I want you to reach around the corner and create something on this site that is the best response known to man for climate change and buildings.” 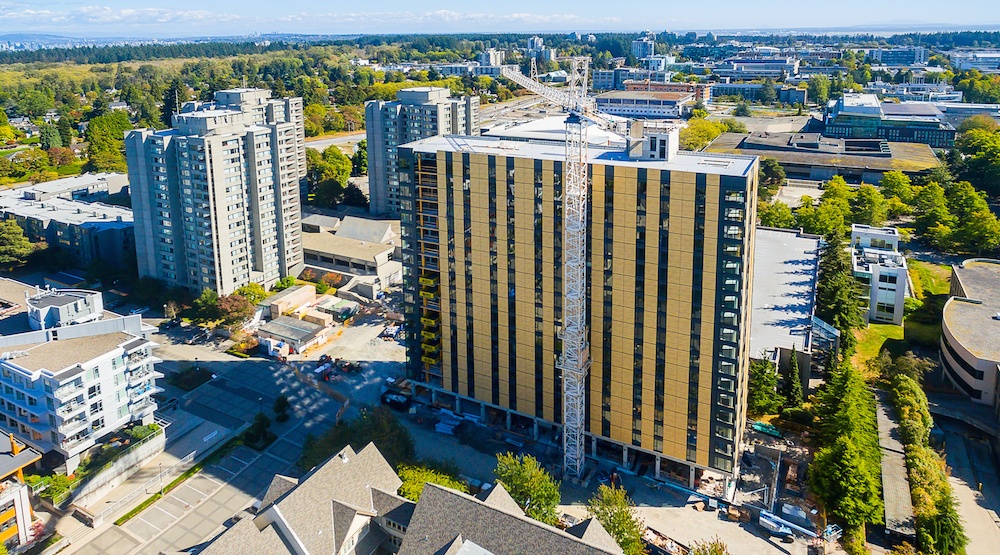 The structure would be predominantly made out of fire-resistant wood, specifically cross-laminated timber (CLT). Floor plates, structural columns, and exteriors will use wood materials, while a concrete core containing the elevators and emergency staircase will be incorporated for seismic and fire safety reasons.

“It’s not going to burn,” he stated plainly.

This method of construction would align with the 2017-built tall wooden student residence at UBC Brock Commons, which was the world’s tallest wood building at the time of completion.

The UBC tower contains 18 storeys within its 174-ft-tall structure, and the building’s usage by the university, government, and construction industry researchers as a pilot project for the feasibility of taller wood construction led to the provincial government’s recent decision to allow wood buildings up to 12 storeys — up from the long-held limitation of only six storeys.

A report released by the Vancouver Economic Commission last month found that the recent changes to the BC Step Code allowing for taller wood buildings could result in 1,700 new jobs in local manufacturing and construction and $3.3 billion in new market opportunities from now until 2032.

“We hope for a call of courage from the city”

Langereis and Busby’s vision, however, go far beyond the path journeyed by the UBC student residence.

The building’s energy requirements will be just a third of a conventional building of the same size, and it will have a massively lower carbon footprint from both its construction and operational methods.

There will be no natural gas connection, as the building will rely on electricity for its energy requirements.

Roofs will be highly insulated with a combination of terraces, vegetation, and photovoltaic systems, and the window system for the facade will be triple glazed, with office levels featuring a buffered glass-dual facade. 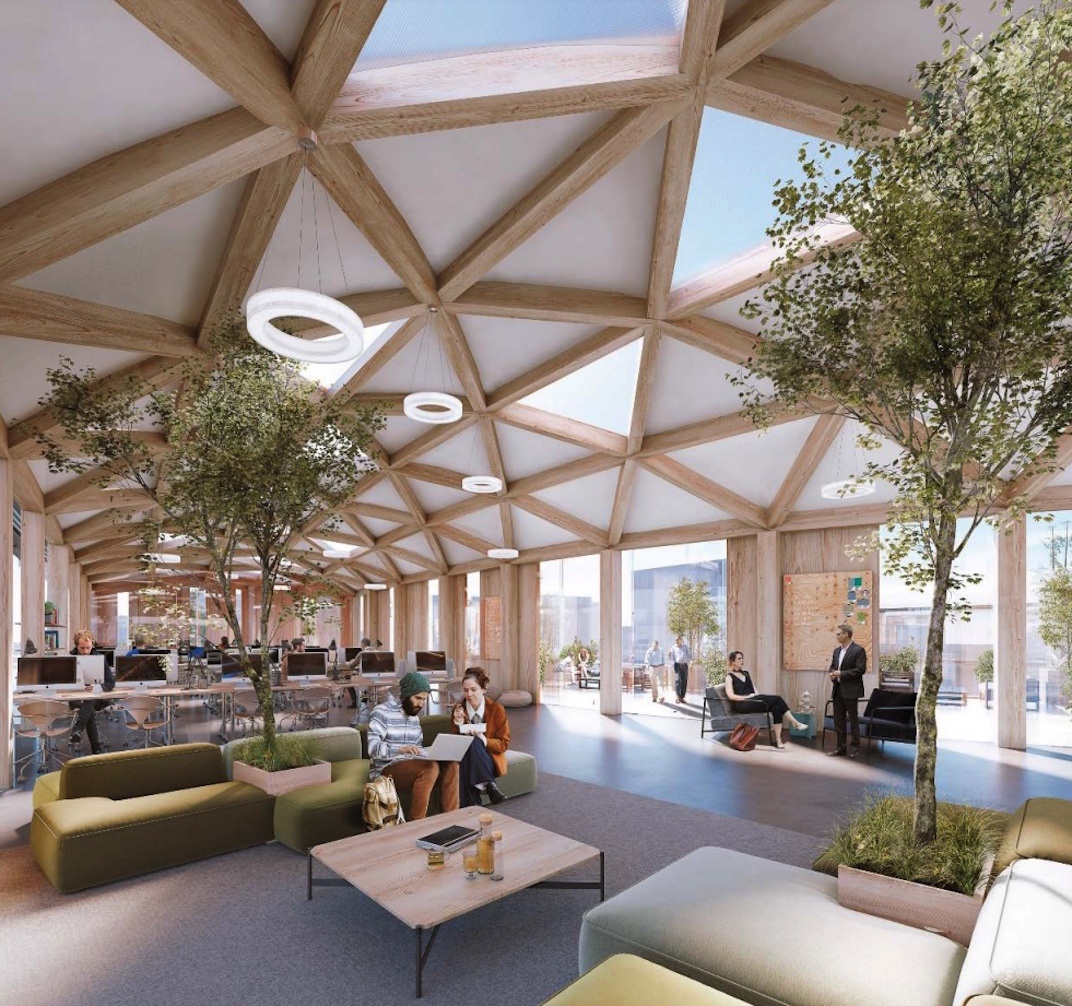 When all of these elements are combined, a Passive House high-performance building standard will be achieved and certified.

“We’re not trying to radically change the ways building are formed as they are pretty set, but we want to change the way they’re composed,” he said. “We want to be as responsive as possible to lowering the carbon footprint, and this solution has been audited by architects, engineers, and building scientists.” 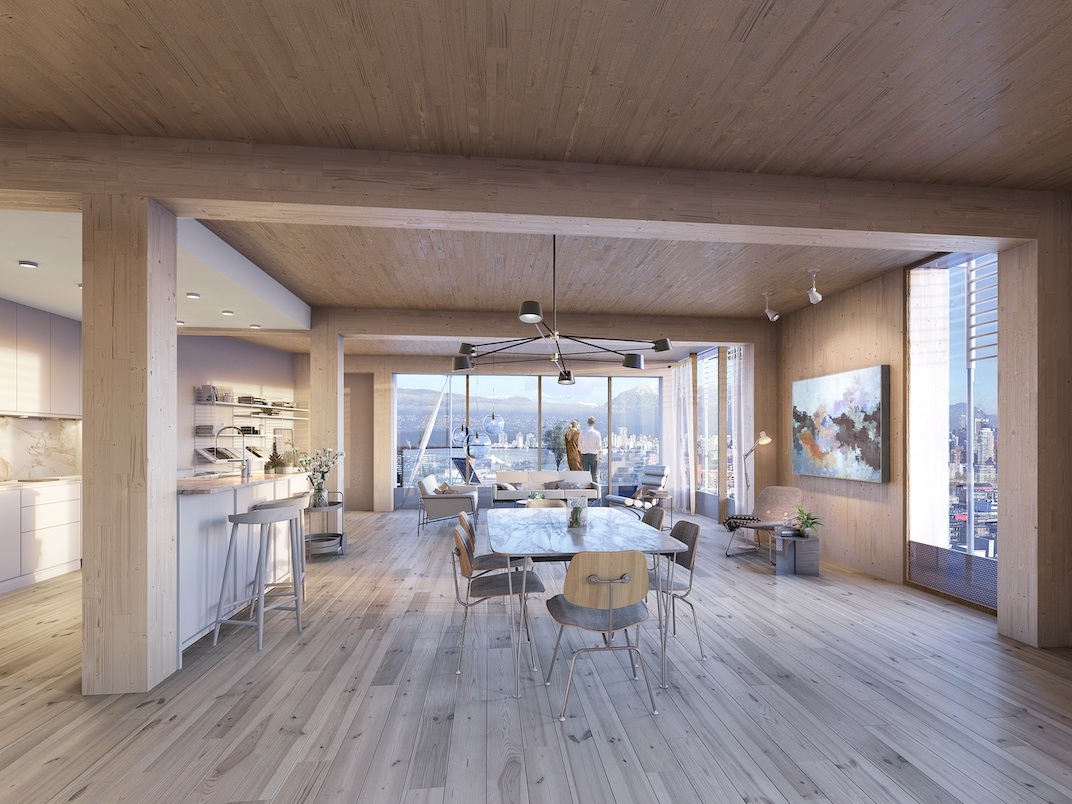 Langereis believes his tower’s model could later be replicated to become the new norm for tall building construction, potentially putting a dent to the 39% share in carbon dioxide emissions contributed by the fossil fuels used to build and operate buildings.

“We hope people won’t focus on merely the form of the building, but also the content and what it tries to deliver,” he said. “Our goal is really simply: we hope for a call of courage from the city, from us, and other developers to change the way now on how we do things. We don’t have an unlimited time with the climate emergency we face.”

“We have to plan for tomorrow, unless you’re a NIMBY”

Remaining optimistic, Langereis fully understands the hurdles the proposal would have to overcome in order for it to be fully realized in an area wedged between the Kitsilano and Fairview areas.

He says it will require a change in thinking on multiple areas of concern.

As proposed, Earth Tower is more than twice the height of the tallest buildings in the area, which falls under 40-year-old C-3 zoning compliance. Currently, the areas just south of the downtown peninsula, specifically Kitsilano, Burrard Slopes, and Fairview, lack the density expected for areas located so close to the heartbeat of the metropolitan core.

He noted that the proposal’s size “does not seem extraordinary” when compared to the far taller towers that are now emerging around many suburban SkyTrain stations, such as Brentwood Town Centre and Metrotown. 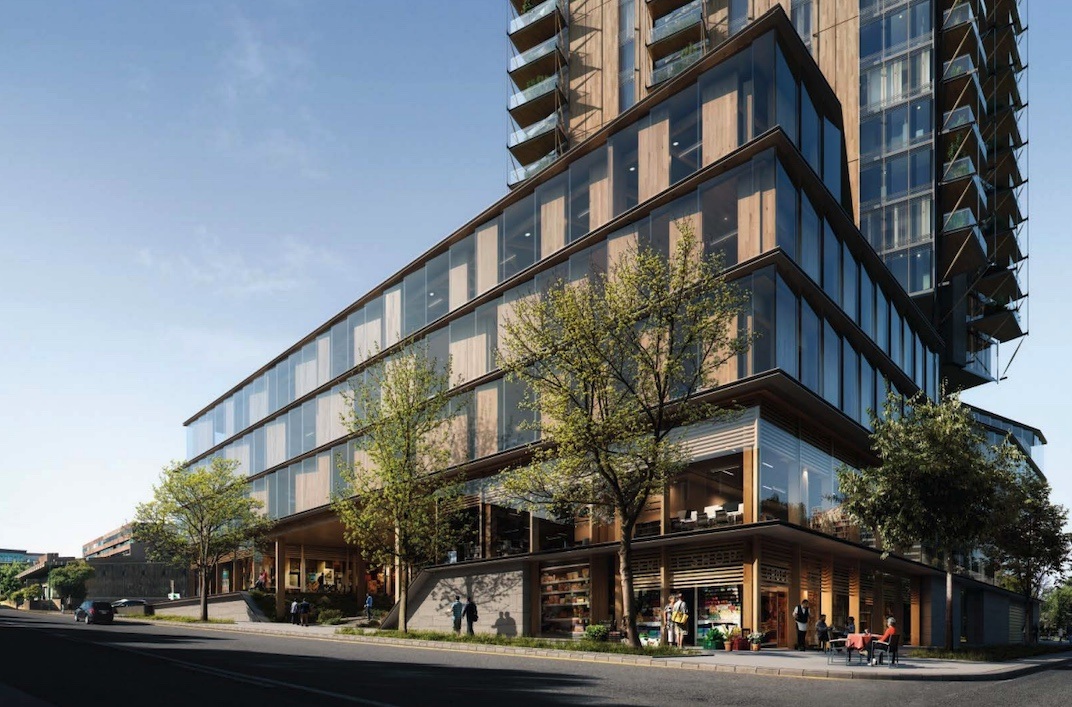 In the case of this particular development site, it is approximately situated in the middle of the six-block-long stretch that separates the future Arbutus Street and South Granville stations of the upcoming SkyTrain Millennium Line extension, giving it relatively close proximity to either station.

“We’re not trying to build a 1,000-ft-tall tower here,” quipped Langereis. “If people focus on the form of the building and miss the essence, that breaks my heart because you’re saying, ‘I’m only worried about what I’m seeing. I don’t care about climate change.'”

“At the end of the day, everyone was living in something that was higher than what was there before. So without that adoption and acceptance of change, change is naturally going to occur and it is going to respond to whatever is the demands of the day. We cannot be trapped in people’s personal agendas, especially when it is for the greater good. This is not just a building for density, this is a flagship for change.” 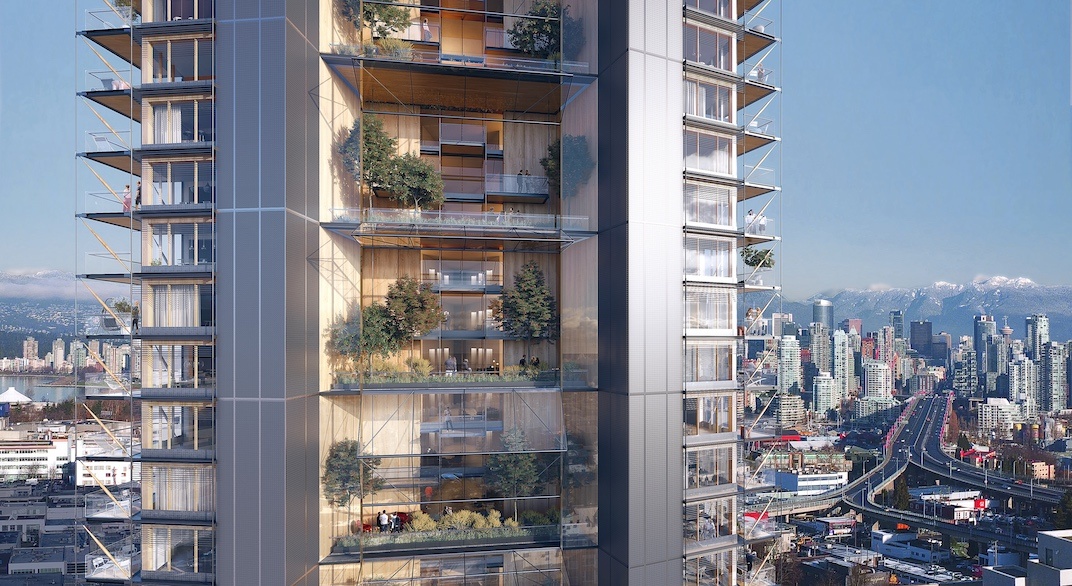 Langereis went on to note that Vancouverites need to accept that the city’s population will grow, and Vancouver’s popularity as one of the world’s most desirable cities is not going to falter. The only way to take in population growth in a more sustainable manner is by building denser around central locations and transit.

“If NIMBYs start crying about affordability, then they shouldn’t be opposing density. We all know that the more you build, the greater chance you have in reducing costs.”

Economies of scale through added density from height

Moreover, a design of this calibre — going far beyond the realm of conventional design and offering public benefits such as non-market housing and public spaces — comes at a premium cost, and the company needs the extra density from the added height to help cover these costs.

“I can build a compliance C-3 building, but it won’t accomplish much. The density will help us offset the extra costs as these buildings are much more expensive to do it, especially when you’re the first guy to do it — when we’re pioneering it,” he explained, highlighting the importance of economies of scale to keep costs feasible.

“We’re not asking them to put us in this big, fat profitable situation. We’re saying help us make this a reality and embrace some of the tools you’ve offered, acting reasonably.” 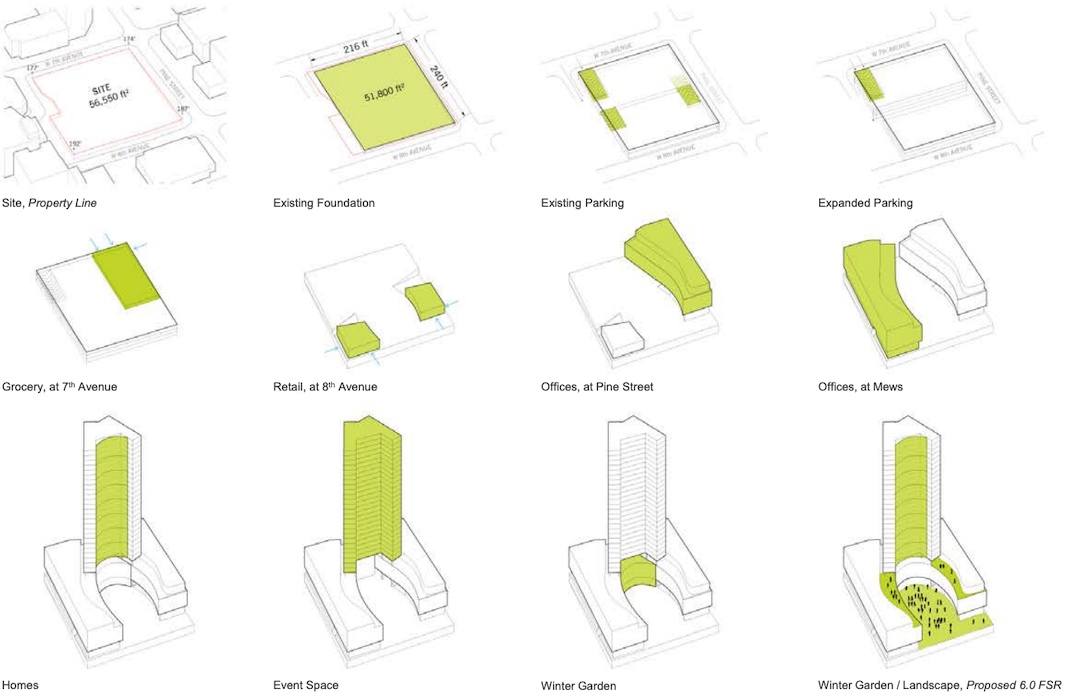 Formal proposal could be delayed by Broadway Plan

One other hurdle the development team is facing deals with the municipal government’s 2018-enacted temporary ban on most types of new rezoning applications along the Central Broadway corridor during the Broadway Plan process, which is not scheduled to be finalized by Vancouver City Council until 2020.

The only exceptions are rezoning applications that offer 100% below-market rental housing, 100% student housing, social and supportive housing, and facilities for community care or group residents. Submitted proposals that have been mid-stream for the last three years are also exempt.

For this reason, although there have been early discussions with city planners, Delta Land Development has yet to submit a formal rezoning application for the proposal. But Langereis hopes his company will not have to wait for another two years; a decision on an exception would require City Council approval.

“We’ve asked. There is potential for this to do it, but they need to have it justified… We’re not right on Broadway, so it’s not like we would impede the development of a transit station. We’re near Broadway but we’re not on it, and we’re not displacing any existing housing.”

Langereis says Earth Tower is currently the company’s largest active project. It is perhaps best known for the revitalization of the Hotel Georgia and the addition of the adjacent 48-storey mixed-use tower, which includes 80,000 sq. ft. of office space on the lower floors and 156 upscale homes within the upper floors.

The Hotel Georgia project kept the relatively small company occupied from 2006 to 2013; during the 2010 Olympics, when the project was deep into its construction phase, the exterior of the heritage hotel structure was decorated with a giant Canadian flag.

Just a few blocks east of the former CIBC site is the proposed Denny’s development, which is currently seeking permission from the municipality to increase its buildable height from the previously approved 159 ft with 17 storeys to 274 ft with 28 storeys. On this former restaurant site at the southeast corner of the intersection of West Broadway, the proponent intends to construct 209 market rental homes plus an additional 53 homes under the City’s Moderate Income Rental Housing Pilot Program. 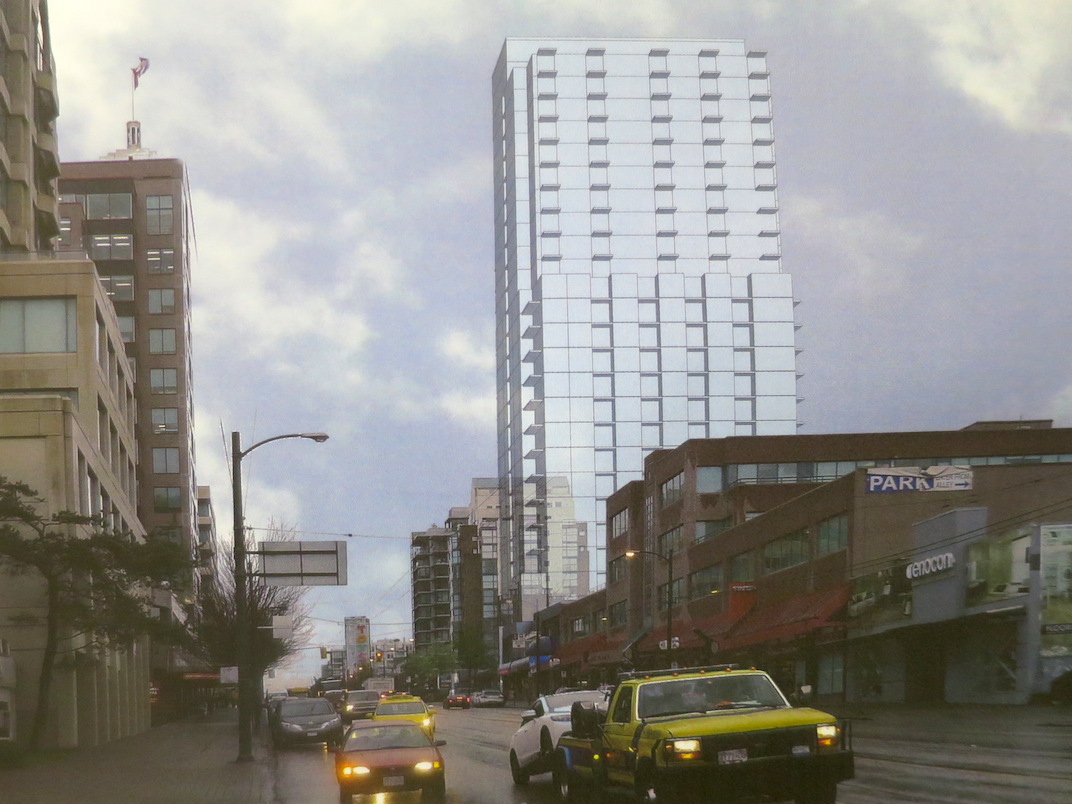