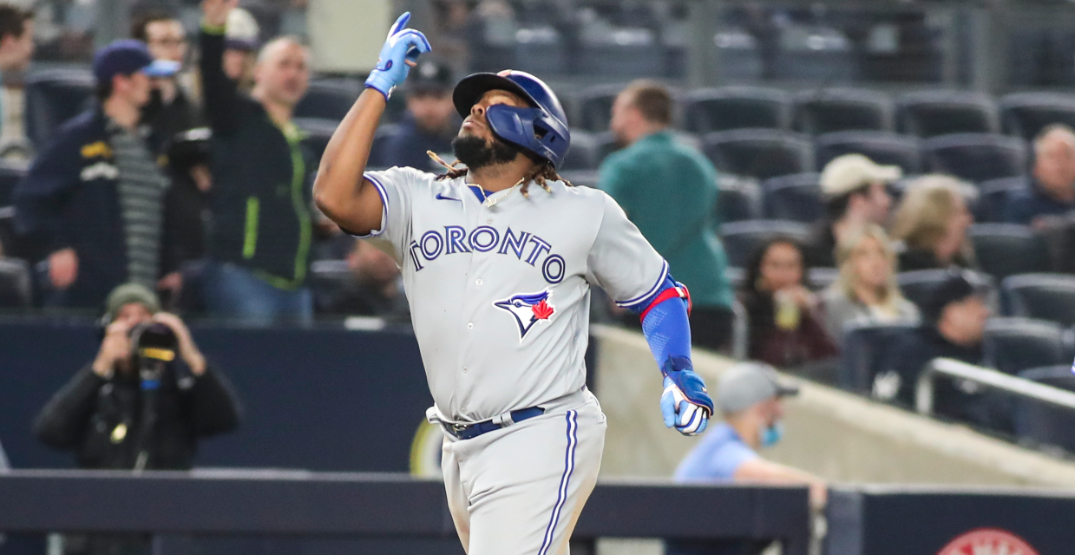 After getting his hand accidentally spiked at first base, he homered again in the third. He mixed in a double off New York Yankees ace Gerrit Cole in the sixth and launched a 443-foot dinger against Jonathan Loaisiga in the eighth.

All in all, not a bad night for the slugger.

Worthy of the hat tip provided by Cole after hammering the two-baser.

“I mean, did you see the night?” Cole told said postgame. “If you had a cap, you’d tip it too. I mean, it got better after that, too. My goodness.”

Keep pitching to him 🤫

In all, 14 total bases for Guerrero, the second-most in a single game in Blue Jays history, according to Sportsnet.

And a good step towards his candidacy for American League MVP, an award he was runner-up for last season.

“I wish it was against somebody else and I could watch it on TV and didn’t see it live,” Yankees star Aaron Judge said of Guerrero. “That’s the type of player he is. He can take over a game. It was three impressive swings. I was even more impressed too with two strikes, shooting a double down the right-field line. The guy’s a game changer and he’s going to be a tough opponent all year.”

Gerrit Cole said he tipped his cap to Vladimir Guerrero Jr. after his double:

"Did you see the night? If you had a cap, you'd tip it too. It got better after that too, my goodness" pic.twitter.com/orMTrSK7AP

The latter pair came with a bloody appendage when his bare throwing hand was accidentally stepped on by Yankees baserunner Aaron Hicks in the second inning.

Trainers made quick work of the injury.

Guerrero, in turn, made quick work of the Yankees.

“Just a great hitter,” New York manager Aaron Boone said. “I thought the first home run to centre was a hanger. He took advantage of a slider up, looked like up in the middle of the zone. After that, it was just a kind of other-worldly hit. The next homer he hit was in off the plate, if I’m right. The double he hits down the line with two strikes, he just lays the bat head out there and dumps it in the corner. Just a really good job of hitting. And then you don’t see many right-handers elevate the ball like that off a low two-seam fastball and obviously he squared that one up.

“Pretty impressive display by him. We got beat by a great hitter tonight.”

Guerrero has collected four homers and nine hits and eight RBIs with a .391 average and .417 on-base percentage in 23 at-bats in those six games.

The youngest player in @MLB HISTORY to:

“It was the trailer last year. He said it,” Blue Jays manager Charlie Montoyo told media. “This year’s the movie. Honestly, all kidding aside, that’s impressive. Anybody that knows baseball and what he did tonight, that’s just impressive. That’s fun to watch. It’s against Cole, one of the best pitchers in baseball. And then to do it again after he was bleeding, that’s impressive to me.

“He deserves all the credit.”