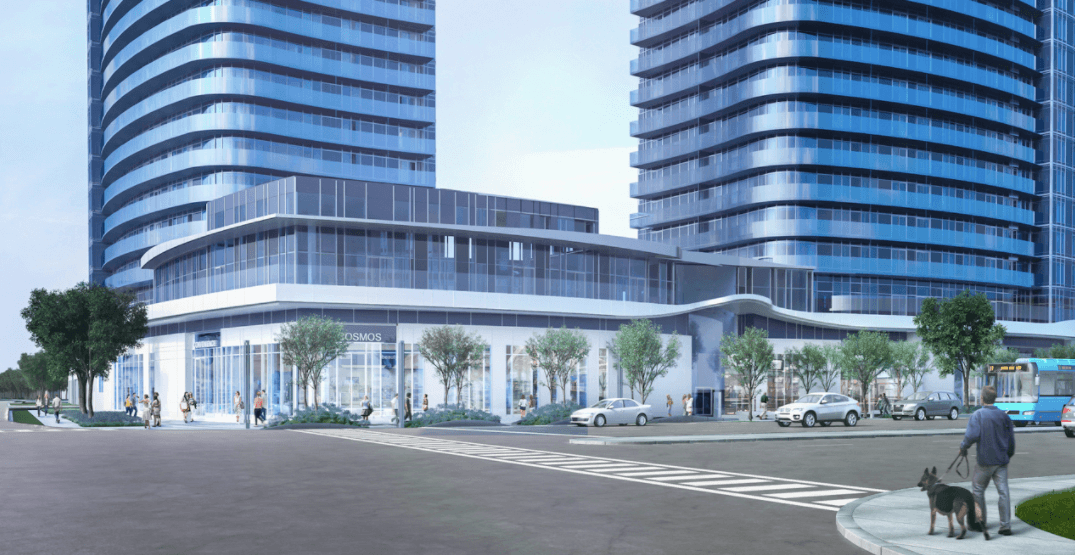 Over 1000 condo buyers were left without a future home when a developer suddenly cancelled a major project in Vaughan.

On Friday, future residents of what was to be the Cosmos Condos received letters from Liberty Development. The project was cancelled per an “Early Termination Condition.”

The developers stated that the reason for the termination was “…because of circumstances beyond our control.” It continued, “as financing arrangements on satisfactory terms to the project vendor cannot be obtained, it will force the project vendor to now cancel all Agreements of Purchase and Sale.”

The Cosmos Condos was planned as a mixed-use development consisting of 3 high-rise condo apartment buildings ranging from 25 to 35 stories with approximately 1,400 residential suites.

Located at the south-west corner of Maplecrete Road and Highway 7, the development was going to be near the new Vaughan TTC subway station.

“I was very disappointed to learn that the Cosmos Condominium project was cancelled,” said Vaughan Mayor Maurizio Bevilacqua in a statement. “I am not at all impressed about what has transpired. While the developer cites financing challenges as the reason, I am much more concerned about the hundreds of people who had purchased a condo where they could live, experience, and enjoy life in our community.” 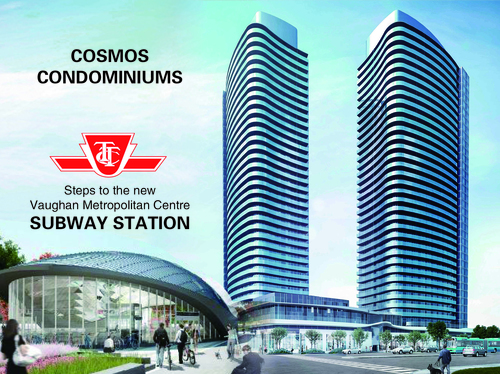 Bevilacqua added that although this is “strictly a commercial agreement between the buyer and seller, I would have preferred that the spirit of the agreement with the buyer would have been honoured.”

The Mayor also said that the city wasn’t given any advanced notice of the decision to issue cancellation notices for purchase agreements.

A Toronto Real Estate Broker said that sending out a letter to families who purchased these condos and refunding deposits is not enough.

“We’re talking about 1,100 people who will now have to pay tens of thousands more for comparable properties, since market values have gone up considerably in the years since their investment in the cancelled project,” said Claude Boiron, of Royal LePage Terrequity Realty – Boiron Group.

Boiron said that the developer has a responsibility to do right by the buyers.

As a way to help the displaced buyers in Vaughan, Boiron said he is offering the Cosmos condo buyers or any victim of a recently cancelled Toronto/GTA condo project, 50% of his own commission (paid by a developer – typically $10,000 – $14,000) for any new Toronto or GTA pre-construction project they buy into.

The only catch is, they would need to use Boiron as the agent.

“Until the laws change to better protect condo buyers, we have an ethical obligation to do the right thing,” Boiron said.

And the developers are not off the hook yet.

Vaughan Councillor Marilyn Iafrate wants council to look into the issue, according to York Region.

“I really think someone should be investigating them and confirming that whatever financial issues they had are valid and if they’re not and it’s just a matter of trying to tap into the higher market, they shouldn’t be allowed to,” Iafrate said. “If that’s what they’re doing … someone should be questioning their ability to continue building in Ontario.”

York Region reports that the councillor has asked the council to look the item in closed session this week.