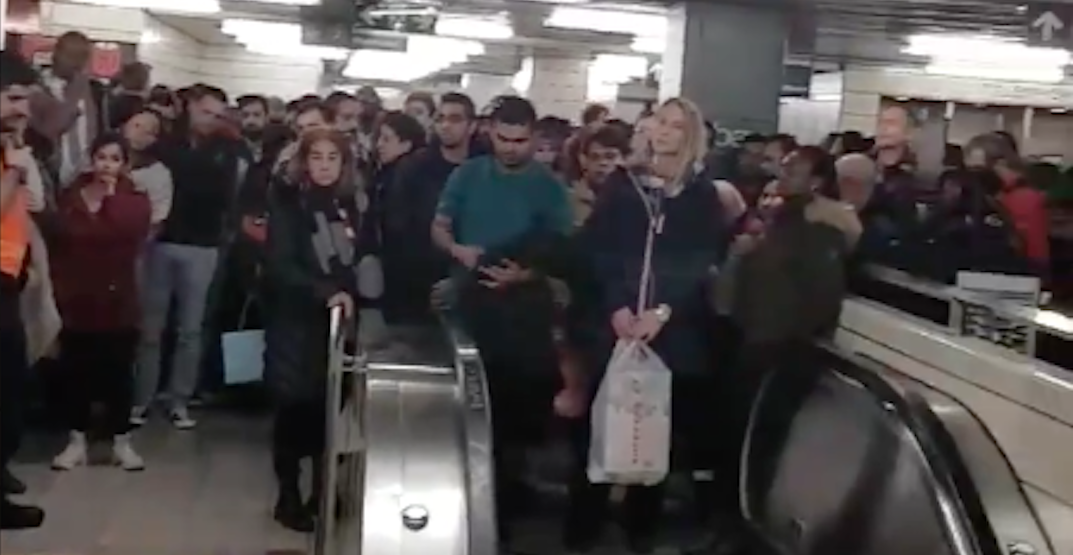 For many transit users, the post-work commute is a time where you can relax after a long day, catch up on reading or enjoy a podcast or two.

That’s of course if you don’t live in Toronto, as dangerous overcrowding continues to be an issue for commuters.

On Tuesday evening, hundreds of passengers at Toronto’s Bloor-Yonge subway station were forced to cram together while they waited for a service suspension to clear during peak rush hour.

“Line 1: No service due to an earlier operational problem,” the TTC tweeted at 5:55 pm on Tuesday.

Line 1: No service due to an earlier operational problem.

While it still remains unclear what the “operational problem” was, the issue was resolved within ten minutes and the TTC quickly tweeted “regular service has resumed.”

The delay, regardless of how brief it was, resulted in chaos at the station, as commuters were forced to cram on the upper platform, while TTC staff blocked commuters from accessing the lower platform.

In videos shared on social media, you can see hundreds of commuters crammed together as they wait for the delay to pass, a scene that can make anyone feel claustrophobic.

Is this the unknown reason? Not enough trains at Bloor Yonge. pic.twitter.com/Qu1VSCBMzT