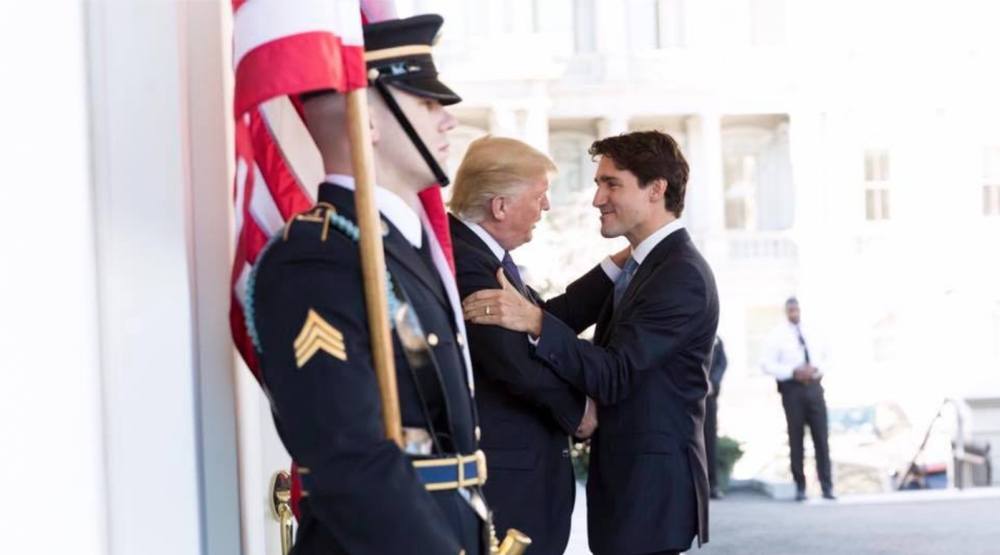 Check muscle flinch at 0:06
Trump tries his macho arm-yank handshake thing
But he gets nowhere, due to Trudeau’s single-arm dumbbell rows https://t.co/DtQH2U5Xj9

Up close this is an amazing handshake. Note how Trudeau is pulling at times and pushing at other times to keep his hand in the same spot. https://t.co/CSr7Oq36bm

It’s the latest Trump handshake to come under scrutiny following a cringe-worthy meeting with Japanese Prime Minister Shinzo Abe last week. The bizarre moment incited The Guardian to run the headline, “Never has such a strong grip looked so weak,” meanwhile American media pounced on Trump’s “habit of pulling forcefully on the hand he’s shaking.”

And then John Oliver broke it down and looked at Trump’s history:

In the moment of meeting, it would appear that the Prime Minister managed to resist Trump’s weird gesture by countering with a friendly but assertive shoulder pat.

While the possibility of another epic bromance like the one shared between Trudeau and Trump’s predecessor seems unlikely, this first interaction looked… civil.

Today, we are all Justin Trudeau pic.twitter.com/woXgZshntj

Justin Trudeau looking at Trump like, “I read about that dossier, I ain’t touchin’ you” pic.twitter.com/bQgs8MPlhW

when he looks nothing like his pic but u already paid for the uber over pic.twitter.com/WTPvc9Nu1a

How the rest of the world views Trump in one image. pic.twitter.com/dklfmX39aR

“As you can see they are NORMAL SIZED HANDS.” pic.twitter.com/lmxVF29fAt