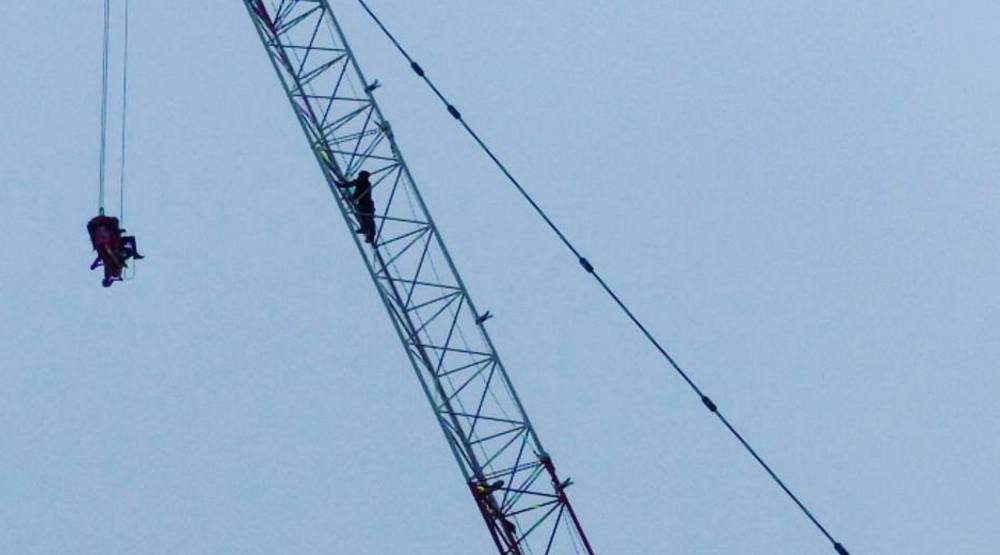 A woman perched on a crane for hours overnight is now safe on the ground following rescue efforts by Toronto emergency workers.

The incident at Church and Wellesley has already received wide media attention and attracted crowds of curious spectators.

They are now above the park. Ambulance waiting. pic.twitter.com/3VdkfioJsh

Seen in handcuffs following her rescue, onlookers will have to wait for more details to find out answers to the many questions the situation begs (how did she get up there? why? how long was she up there? etc.). Of course, Twitter has been quick to speculate and joke about the situation. See how Twitter reacted to the great Toronto crane rescue of 2017.

I hope for three things: that the firefighter is safe, the girl is rescued & she’s happy with the picture she took. #views #crane #Toronto

HOW THE FUCK DID SHE GET UP THERE? THIS IS HAPPENING IN TORONTO RIGHT NOW. 12+ STORIES DANGLING FROM A CRANE #crane #Toronto pic.twitter.com/o1q6mD9zAa

@ChiefPeggTFS @JohnTory @Toronto_Fire Seriously. I wish the media would care more about homeless people vs some girl who climbed a crane. #priorities

there’s currently a woman in toronto who’s climbed to the top of a crane… in 2 INCH HEELS?? god damn

The Toronto crane rescue is giving me some serious anxiety. Omg.

@AvocadoIsGod We got a woman trapped on top of a fucking crane this morning in Toronto. Now they tryna rescue her stupid ass.

In the good old days, one of the Toronto newspapers would already have a second crane erected for the purpose of interviewing Crane Woman

We’ve all done stupid things in our youth. This illegal thrill seeker stuck on the crane takes stupidity to a new level! #Toronto

@CityMelanie @Toronto_Fire She is likely in some kind of crisis. A little compassion for her would go a long way. Hopefully she is rescued from the crane & the cause