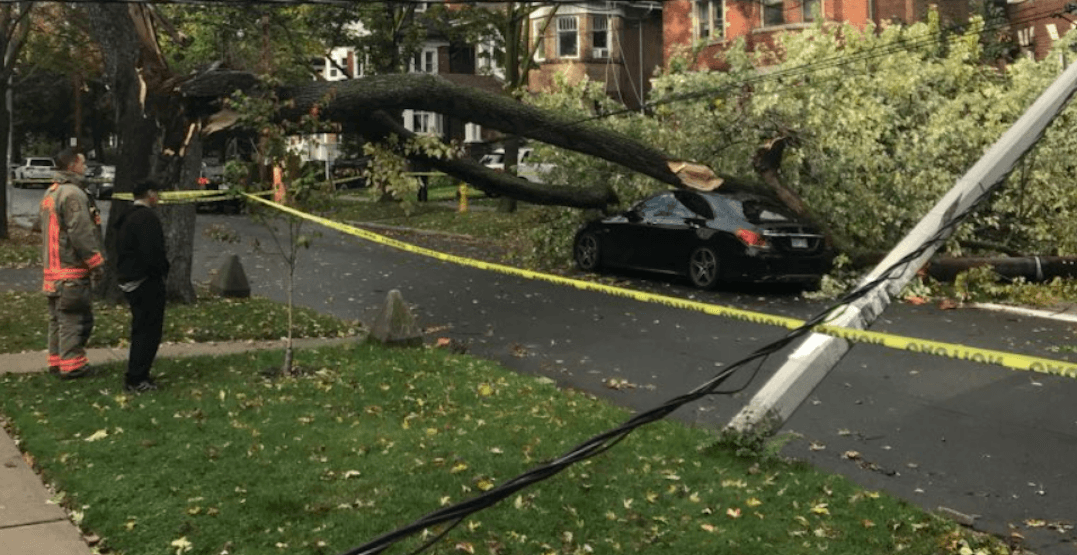 This weekend ended on a windy note, as high winds and rain rocked the GTA and surrounding areas.

The windstorm, which was said to have high winds up to 90 km/h, took down power lines, knocked over trees and caused absolute chaos for residents leaving nearly 25,000 homes without power.

While many of us saw Environment Canada’s warnings and stayed indoors, others embarked outdoors nonetheless and managed to capture the aftermath of the storm.

For those of us who weren’t so brave, check out top photos and videos of yesterday’s powerful windstorm in Toronto.

This just happened. Lawrence & Warden. Hydro pole snapped in half and tree down. #windstorm or #tornado ? #onstorm pic.twitter.com/XpNb1NOugr

the hydro pole is about to fall near my place #toronto #storm #wind pic.twitter.com/O46lexlRHv

The wind is going to knock this thing right through my window I can feel it pic.twitter.com/Om8PbARVCc

The Northern portion of #MadisonAvenueToronto is still without power after the #TorontoWindstorm #Toronto #Annex pic.twitter.com/IwpApcadxJ

Islington and Rutherford in Vaughan multiple power lines down pic.twitter.com/lG5jz3coph

On Madison Avenue in Annex pic.twitter.com/ytcFIUYjbK

Sidewalk and part of the roadway blocked by a tree #ldnont #ONstorm pic.twitter.com/xsYWWtSZLr

What a wild #storm #toronto pic.twitter.com/zeFDoZ0I6J

Casual Toronto storm watcher for 10+ years and I've never seen a cell of wind and rain blow over like what just happened in High Park. pic.twitter.com/8jndlwaiLe

Well that was wild. Watching clear skies turn into a crazy storm in Toronto in just a few mins pic.twitter.com/vxEKIwM6QZ