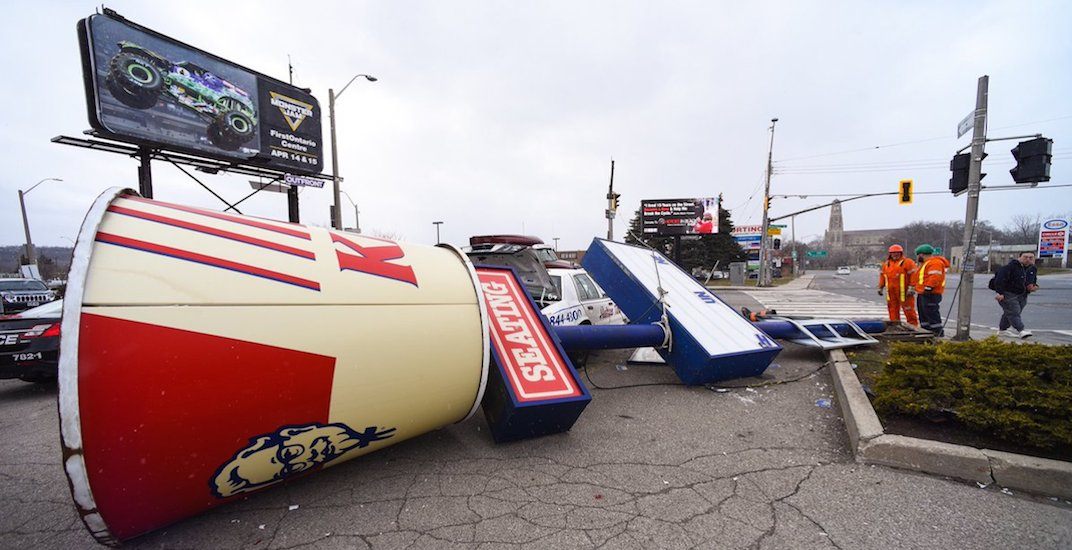 Earlier this week Environment Canada put out a wind warning for Toronto, cautioning the city that wind speeds could reach up to 90 km/hr.

They also warned that the severe wind could cause power outages and damage to buildings and that loose objects may be tossed around.

And boy, was its forecast ever right.

So far today, the windstorm has caused nearly 100,000 customers in southern Ontario to lose power as strong winds move through the region.

Due to high winds, we’re receiving multiple wires-down calls across the city. Crews are responding as quickly & safely as possible, but are not able to provide ETORs at this point. Thank you in advance for your patience. Stay safe!

In Hamilton, the storm was so severe it caused a giant KFC sign, which included a bucket of fried chicken, to crash into a cab in the KFC parking lot.

Powerful winds in Mississauga caused a crane to collapse backward.

Here in Toronto, the wind has wreaked havoc, causing massive swells in Lake Ontario, trees to fall over, and destruction to buildings and homes.

Winds now approaching 100 km/h with my anemometer measuring a gust to 92 km/h.

A moment of silence for my neighbour whose day is now ruined because of the winds in Toronto. pic.twitter.com/tTkGldlWib

The wind is so strong today in Toronto that it caused some damage in the front yard. “The repair would take up to 72 hours. You might also get occasional outages as we work on the electric wires.” Says my landlord. Stay safe everyone!
monkaS pic.twitter.com/5JyKEhlor6

According to Environment Canada, the winds are expected to gradually begin to diminish by Wednesday evening.

In the meantime, stay safe out there.