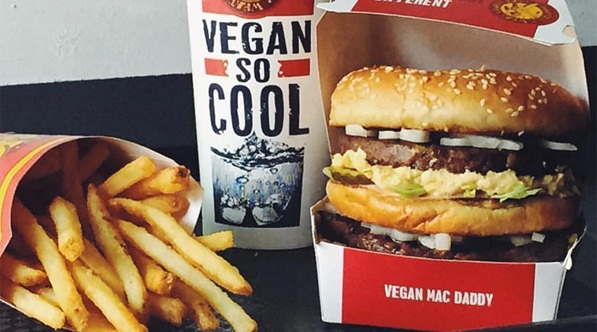 Vegan Food Fest is back in Toronto this Saturday, August 13, on the grounds at historical Fort York. Now in its sophomore year, the Toronto festival will spotlight vegan vendors from near and far. In an attempt to avoid the long line-ups and similar food shortages to last year (damn those were some hungry vegans), this year’s vendors line-up look especially stacked.

Here’s a preview of just some of the meat-free delicacies that will be available at the Toronto Vegan Fest ’16.

For those of you who loved my #poutine at @vegfoodfest and the #vegan festival this summer and begged me to make it again, or for those of you who didn’t get to try it because I was sold out or you weren’t at either event, I am serving my #Polenta Poutine with miso mushroom #gravy and #housemade cashew cheese curds at my (1 night only) Diner Dinner this Friday, October 23rd. Although my second seating is now sold out, I have tables left at the early and the late seatings – please call my #PublicKitchen or email [email protected] to reserve your table. Full menu online at dougmcnish.com under menus. Special thanks to @vegangirlfriend for this photo! #veganfood #goodfood #comfortfood #organicfood #cravings #vegansofig #torontofood #torontoeats #torontolife #itsallgravy #veganeveryday #eatrealfood

Local favourite Doug McNish is bringing back crispy polenta fries smothered in cashew cheese curds and miso mushroom gravy. This dish was so popular at last year’s festival, they were sold out before many attendees ever got a taste.

Would it really be a festival without funnel cake? For one day only, we’re bringing you these exclusive vegan funnel cakes topped with mango sorbet, fresh strawberries and wild blueberries. 🍧🍓So y’know, don’t commit yourself to sharing one. Grab a ticket soon because they’re hot and fresh, and only at the Vegan Food & Drink Festival! #veganfestto

Funnel cake is a summer festival staple that are usually a no-go for dairy-free eaters. Not so at Toronto Vegan Fest! The summery dessert is sure to make a big splash with its fried doughy goodness and fresh fruit toppings.

We’re closed tomorrow so get your Bacon Mac fix today 👌

Hailing from Chicago, Illinois, this vegan vendor will be dishing out signature offerings like this bacon mac ‘n cheeze along with jackfruit nachos. Yum!

Originating in Hollywood, but boasting its very own Toronto home base (in Parkdale), the makers of the vegan Big Mac are about to introduce these big, cheesy Italian-style sandos. Of course the meatless McD’s burger (see lead photo) will be there too.

We are the makers of tacos and the dreamers of dreams❤ Open 5pm-9pm tonight at 913 E. Cesar Chavez. Call ahead for orders to go, 512-497-3147. Breakfast tacos served all day : ) #NuevaOnda #BirdieSanders #Tacos #eastside 📷credit #saltysoy

Tacos from south of the boarder are the best! All the way from Austin, Texas, this vegan taco truck is promising tortillas topped with options like maple miso sweet potato, refried beans and vegan chorizo.

Toronto, we’ve got another festival exclusive coming your way! You don’t have to wait until they open in Yorkville… PLANTA will be debuting their food at The Toronto Vegan Food and Drink Festival this weekend. Renowned chef David Lee will be in attendance, giving guests the opportunity to try their Zucchini Carpaccio and Fried Pigeon Pea Fritters first. You do not want to miss this! Get your tickets online. #VeganFestTO

The plant-based restaurant from the same folks behind The Chase is set to debut this fall in Yorkville. Get an exclusive sneak peak of what’s to come at the festival on Saturday.

Our vegan Broc You Like A Hurricane special: Follow Your Heart vegan cheese, Spinach, Buffalo Jackfruit and Green Onions. Available in the slice case today at all our Portland locations AND as a whole pie for dine in, take out or delivery for the next week and a half! Proceeds go towards our main dog Broc DeMarco–a beautiful hunky hunk of a man in need. #sizzlepie 📸 @ohhmikey

This pizzeria born on the west coast is soon to open an outpost in Brooklyn, New York. With the exchange rate being what it is these days, you might want to fill-up on these vegan pies in Toronto while you can.

Warm brownies and blondies are the specialty from this bake shop out of Los Angelos. At Vegan Fest this weekend, expect to see them topped with scoops of Toronto’s own Pleasantville Ice Cream.

Sticky, sweet cinnamon buns from this Bolton, Ontario bake shop are about to make their Toronto debut. Expect to see this nostalgic treat dressed with a variety of toppings.

Toronto! Since everything is bigger in Texas, we thought we’d kick off our lineup with something HUGE. All the way from Austin, Texas, Arlo’s joins us August 13th to dish out their internationally known Bac’n Cheeze Burgers. Early bird tickets still available at www.vegandrinkfest.com. 🍔🍔🍔 Link in bio.

All the way from Texas, this curbside kitchen is set to spend the day slinging vegan banquet burgers stacked with seitan bac’n and melted cheeze.