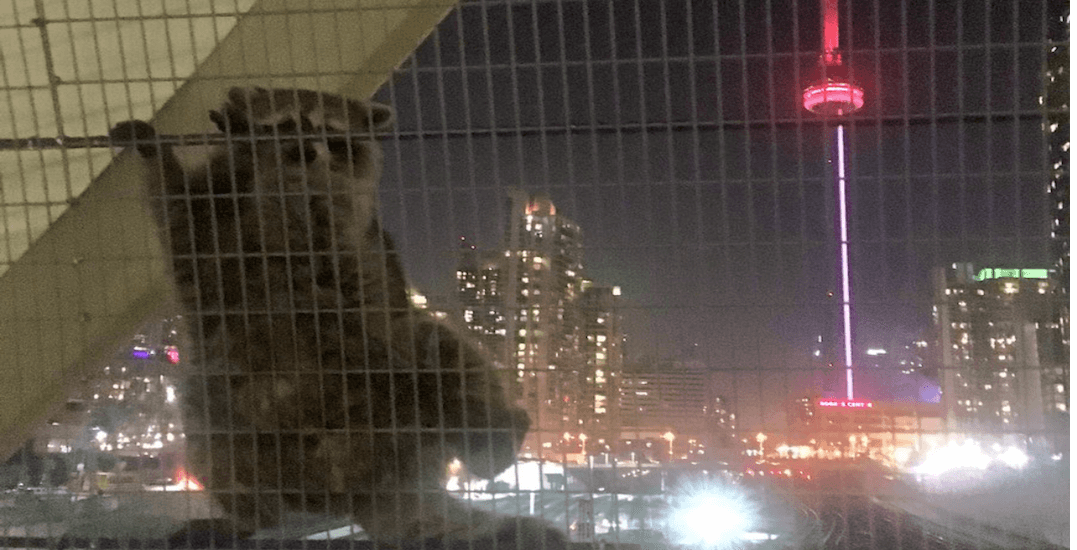 It appears the latest hilarious raccoon sighting in Toronto went down on the CityPlace pedestrian bridge over the weekend.

Somehow a curious trash panda found its way onto the exterior fencing along the bridge, which runs 125 metres over the busy rail corridor between Front Street and Iceboat Terrace.

And luckily, Danielle d’Entremont‏ happened to be in the right place at the right time and snapped a photo of the adorable raccoon before sharing it on Twitter.

took the most Toronto photo on my way home last night. pic.twitter.com/NW2TRnSTVd

In the photo, the curious critter can be seen climbing on the fencing, while the CN Tower and the Rogers Centre are lighting up the night sky in the background, making this the most Toronto photo ever.

Once shared on Twitter, the image quickly became a viral sensation and at the time of writing this post, it’s already been retweeted well over 4,100 times and liked over 18,700 times.

The photo even caught the attention of Toronto Mayor John Tory, who was quick to respond and not only mention how cute the picture is, but to use this as his chance to promote the city’a raccoon-resistant green bin rollout.

In the past, the city’s unofficial mascot has been spotted causing a delay on the subway, cruising the self-checkout at a local Shoppers Drug Mart, living in a local bank, climbing up a crane, and even influencing some pretty awesome Halloween costumes.