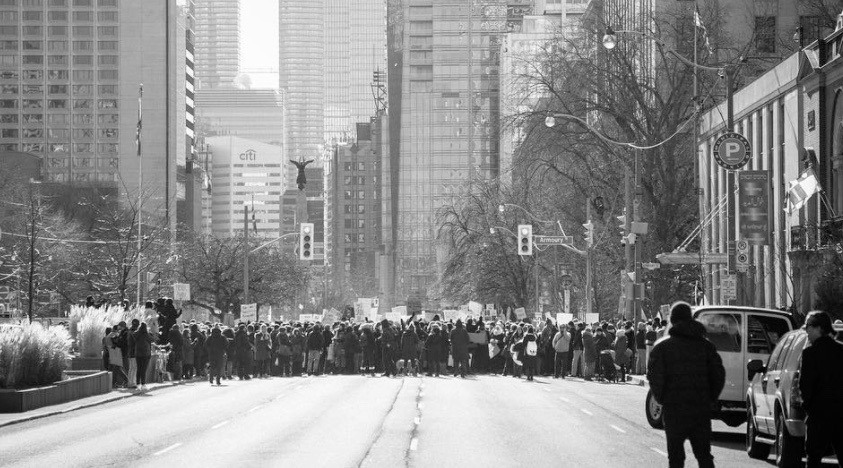 Yesterday, hundreds of people gathered outside of the US Consulate in Toronto to protest President Donald Trump’s immigration ban.

In fact, the planned protest, put together under the Facebook event “We support refugees + muslims”, was enough to shut the Consulate down for the day.

Despite the cold weather, hundreds of protesters made their way to 360 University Avenue to stand outside the Consulate to demonstrate. Another protest is already scheduled to take place this Saturday, February 4 at 12:30 pm outside the Consulate with more than 5,000 people already saying they plan on attending and another 7,000 interested in the event.

Here are 19 of the most powerful pictures from yesterday’s protest.

Excuse my writing-Coming from a half Syrian family with many refugees, I am proud of our Prime Minister and so grateful that Canada so warmly welcomed over 30,000 refugees. This is something America, and their now president Donald Trump should learn to do and not spread hate. No human is illegal, and nobody should be banned from entering. We are not strong despite our differences and diversity, we are strong BECAUSE of them. #MuslimBan #NoMuslimBanTO #UnapologeticallyMuslim 🇨🇦

Just want to express my support for all those who have been wronged by Trump’s refugee ban. Took this photo of all the lovely #Toronto folk I got to yell with this morning. My nose is runny as fuck. 🖤🖤🖤

What a tragic weekend it has been 😢. Take care of yourselves and your brothers and sisters during this difficult time. Don’t let anyone deny you of your rights! #muslimban #nomuslimbanto

Protesters at the U.S. Consulate in Toronto. #NoMuslimBanTO

The city as stage and backdrop for political action. #WelcomeRefugees #WeStandWithOurMuslimBrothersAndSisters

I cry a lot now. It’s become my new normal state of being. Sometimes they’re tears of anger, or fear, or heartache when I think of all that my grandparents went through in Nazi-occupied Poland and how we should never have come even close to being in this place again. Sometimes it’s all that rolled into one plus tears of hope and solidarity when I see people come out by the hundreds and thousands to stand with and for those whose rights and whose voices are being threatened (and worse). Toronto stands with you, our Muslim brothers and sisters, and with everyone who is and will be hurt by the mess happening in our world right now. We are stronger together. #nomuslimbanto #muslimban #nobannowall

Just when I thought I missed it all, Toronto holds a protest! I LOVE YOU CANADA! Thank you so much for your support! 🇨🇦 #toronto #resisttrump #resist

Prayers during #MuslimBan protest outside U.S. Consulate in Toronto. Protestors gave their placards to use as mats.

Protesters at the U.S. Consulate in Toronto. #NoMuslimBanTO