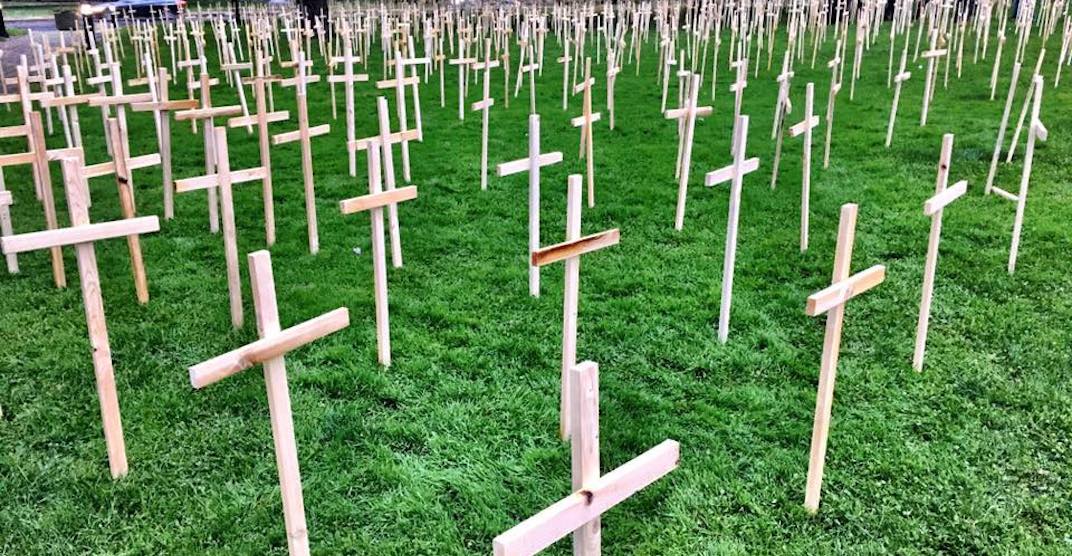 The 1,265 crosses, which represent people who died from overdoses in Ontario last year, were set up as part of a vigil being hosted by the Toronto Overdose Prevention Society (TOPS) and the Toronto Harm Reduction Alliance (THRA).

So many tears flowing at this morning’s vigil and really hard to look away as legislative security forces dismantle memorial honouring loved ones. Gratitude to @TorontoOPS and @NoHarmToronto for organizing this powerful action. #NoMoreDrugWar #HarmReductionIsLife pic.twitter.com/0y0D2gixtu

Powerful vigil this morning at Queen’s Park. 1265 wooden crosses represent 1265 Ontarians who have lost their lives to the opioid crisis. As Ford & Elliott extend their unnecessary review and delay OPS from opening, people are dying and families are destroyed. #ParkHP #onpoli pic.twitter.com/Euscdqc77g

“We have come to remind the government of what is at stake with their current ‘review,’ and commemorate the much-loved members of our community that we have lost,” reads a statement from TOPS.

The vigil was supported by Indigenous leaders, friends, families, and community members that lost their loved ones to remind the government about what’s at stake with the current review.

“Our government’s overriding priority is to ensure that all efforts to combat opioid addiction are designed to introduce people into rehabilitation and that those struggling with addiction get the help they need,” said Christine Elliot, Deputy Premier and Minister of Health and Long-Term Care, in a statement about the review.

“That’s why our government has committed to investing $3.8 billion in mental health, addictions and housing supports over 10 years.”