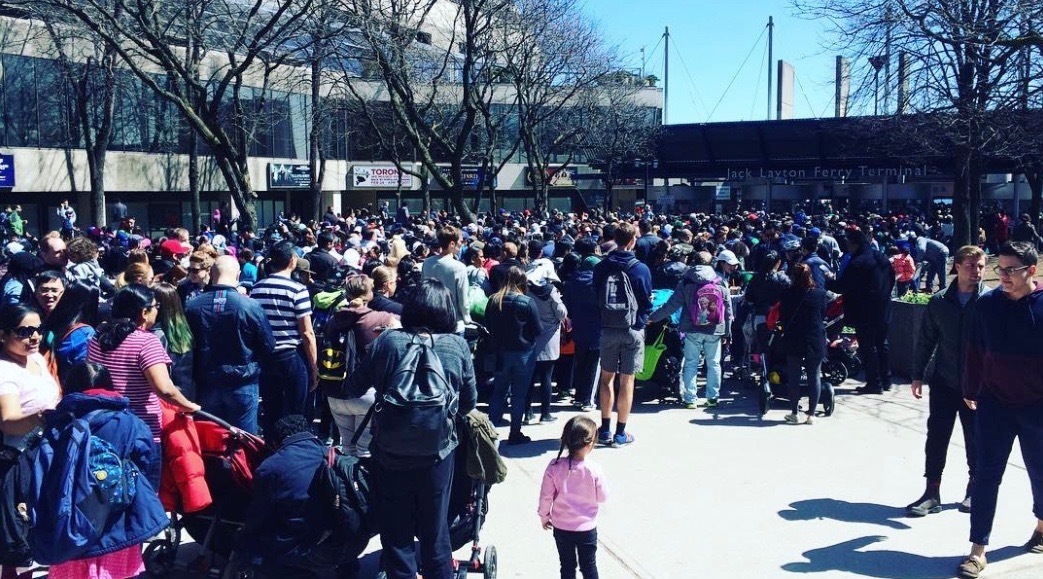 Toronto Island has the ingredients for an ideal, picturesque venue for everything from marathons to music festivals.

It also seems like a no-brainer for a massive, weekend-long Easter egg hunt.

Of course, on Good Friday, the kids had the day off school, the sun was shining and temperatures climbed into the teens after a long winter – a perfect day for the Toronto Island. But you know what can kind of kill that fuzzy “spring in the city” vibe? Waiting in line for hours with swarms of fellow (impatient) island-goers and their children.

And that’s exactly what happened on Friday, as hundreds of people waited in huge lines at Jack Layton Ferry Terminal to hit Centre Island for an Easter egg hunt hosted by Centreville Amusement Park and Far Enough Farm. The “Easter EGGstravaganza” website states that the event was “back by popular demand (and a very cooperative ferry schedule).” Apparently, the schedule wasn’t “cooperative” enough.

Friday was the first day of spring service for the ferry dock – and it definitely had a rude awakening when the service couldn’t keep up with the demand, resulting in a lot of Good Fridays were not so “good” after all. As angry social media users pointed out, the lineups left a lot to be desired (and the photos are enough to make you claustrophobic).

One Twitter user called the event poorly organized, saying that her children cried and they didn’t end up going. Another called the whole thing “the worst experience for a child,” expressing anger at not just the ferry schedule, but the “unorganized” event itself, where eggs were “non-existent.”

Really @PamMcConnell28? How long does the public have to wait for better ferry service to Toronto Island? #TOpoli @jpags pic.twitter.com/jTIB3WgcyV

The Easter EGGstravaganza website stated that the event would run Friday to Sunday from 11 am to 4 pm. Apparently, there was no limit for the number of tickets sold.

Of course, this isn’t the first time that logistics put a damper on otherwise memorable days at the island. Even the best-planned events are often logistical nightmares thanks to the ferry situation (a situation that’s only amplified when it rains). That’s what happens when you get hundreds of people leaving and departing the city at the same time. Two summers ago, leaving the Bestival music festival could only be compared to fleeing a disaster, as people were practically trampled and friends were torn apart. Bookending what was otherwise an incredible time with two freak-out-worthy ferry rides was definitely not worth it for many people.

#bestival should be renamed #worstival with the 2 hour lineup to catch the ferry. Brutal. #BestivalTO

I’ve heard similar stories – albeit not quite as dramatic – after other events as well.

At the end of the day, it’s sort of like attending an event in an incredible view-filled rooftop venue; it’ inevitable to have to wait in line for an elevator up and down, but you accept it for what it is.

The good news is that last year John Tory announced, beginning in 2018, the city would get shiny new ferries to handle an increase in traffic to the island. You can also purchase ferry tickets ahead of time via the City app and Ritual, at least eliminating the ticket line from the equation.

Of course, there’s always the water taxi (in some cases, your sanity could be worth the extra dollars).