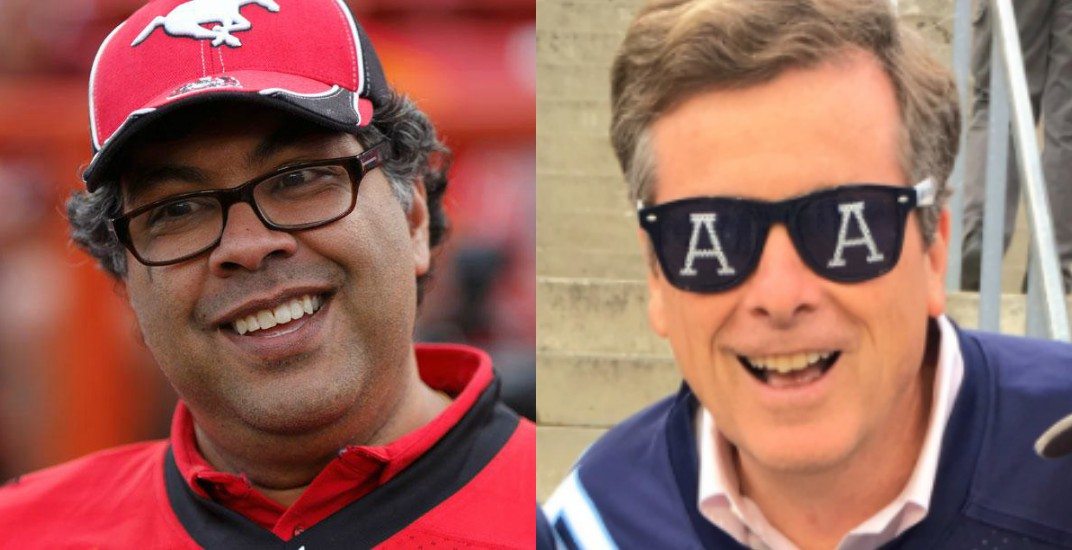 It’s a tradition as old as it is played out.

With the Calgary Stampeders and Toronto Argonauts set to play for the Grey Cup in Ottawa this Sunday, the mayors of each respective city have made a bet.

Of course they have. Although this one has a bit of a twist.

Toronto mayor John Tory announced the terms of the friendly wager on Twitter that he and Calgary mayor Naheed Nenshi have agreed to.

The mayor from the city of the losing team will have to donate $5 for every point scored by the winning team to the respective city’s food bank.

Part three is the intriguing part and it involves poetry.

The losing Mayor will also wear the winning team’s jersey and read a poem selected or written by the winning Mayor at the next council meeting. Now taking suggestions for which poem @nenshi should read #Argosfootball #goodluckArgos #GreyCup

Yes, the losing mayor will not only have to wear the winning team’s jersey at the next council meeting – that’s been done before – he will also have to read a poem selected or written by the winning mayor.

Ok, now you’ve got my attention.

It appears neither mayor has been deterred from gambling, despite their recent struggles in sports wagering. Mayor Nenshi lost last year’s Grey Cup bet to Ottawa’s mayor when the Redblacks upset the Stampeders, while mayor Tory lost his MLS Cup bet when Toronto FC lost to Seattle.

Calgary is the heavy favourite heading into the Grey Cup. They were the CFL’s best team again in 2017, but the Argos are on a hot streak and should pose a significant challenge with quarterback Ricky Ray playing at the top of his game.