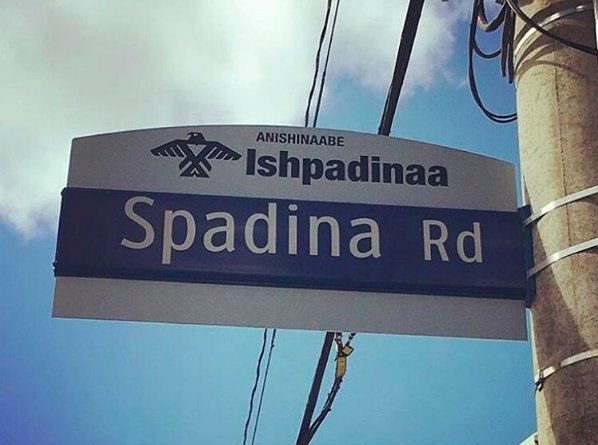 It’s been years in the making, and this week the City of Toronto’s Dupont and Spadina neighbourhood has new street signs in both English and Anishinaabe.

The new street signs were a joint effort between Ogimaa Mikana, Dupont by the Castle BIA, and the City of Toronto. They are located at Dupont & Spadina, Davenport & Spadina, and Dupont & Davenport – or Ishpadinaa & Gete-Onigaming.

The Ogimaa Mikana Project is an effort to restore Anishinaabemowin names to the streets of Gichi Kiiwenging (Toronto). The Project has been active for the past four years, and has installed numerous billboards across the Anishinaabeg territory – from Toronto to North Bay, Ontario.

Over the past week, OCAD’s Indigenous Visual Culture office also released their new “Tkaronto vs. Akwe:kon” shirts for a fundraiser. The shirts, a take on Peace Collective’s popular Toronto vs. Everybody shirts, is a Mohawk replication.