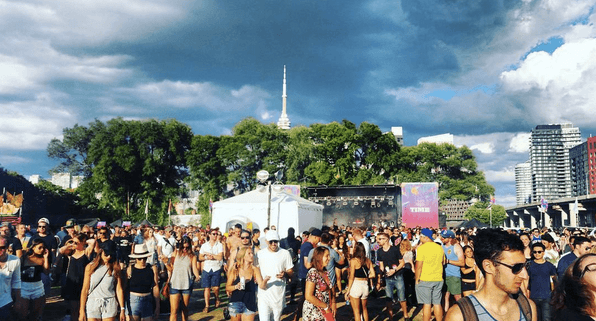 Time Festival returned to the city on August 6 taking over the grounds at Historic Fort York.

The one-day music festival, presented by Embrace, featured local and international artists performing on two stages. With green grass, sunshine, food trucks, and lots of Toronto-brewed Ace Hill Pilsners, Time checked all the music festival boxes. The accessibility and location were just added bonuses to the fest, which could not have taken place on a better day.

The sunny skies shined as artists began to take the stage. On the main stage, Toronto’s CRSB got things started off early as the music fans begin to fill the grounds. The hot day got sweaty when Nyck Caution and Kirk Knight took the second stage by storm, and at one point a laptop went flying off the stage. The Pro Era rappers later joined Joey Bada$$ on the main stage during his set.

Probably one of the festival highlights, Joey Bada$$’s set was charged with energy, and fans were seen jumping and crowdsurfing to the rapper’s music. Soon after his charismatic set, American R&B singer-songwriter Kehlani took things down a notch, but her fans sang to almost every one of her songs during the 50-minute set.

Vancouver’s Bob Moses closed off the second stage with a perfectly lit electronic set, while New Zealand’s Broods swooned the crowd with their mellow-indie-electonica sound on the main stage. As the sunset, Headliners Run The Jewel wowed Toronto with a beat-heavy set that left the fans dancing into the night.

And with the city lights in the background, this year’s Time Festival came to an end. And already, we are missing the city festival music vibes.

Check out some of our favourite shots from this year’s Time Festival.

what a TIME to be alive #photography #iphone #TIME

cash ruined everything around me #joeybadass

all 💅🏼 from @kehlani in toronto

Toronto move topped with a festival. Pumped for Run The Jewels and Bob Moses. #inthe6now

#RTJ putting on a clinic.

@broodsmusic giving me some nz feels 🔥

I’m really liking #timefestival by @embracepresents. I got pretty sweet shots today. This one was shot with my phone though. I’ll upload them soon #concert #Toronto