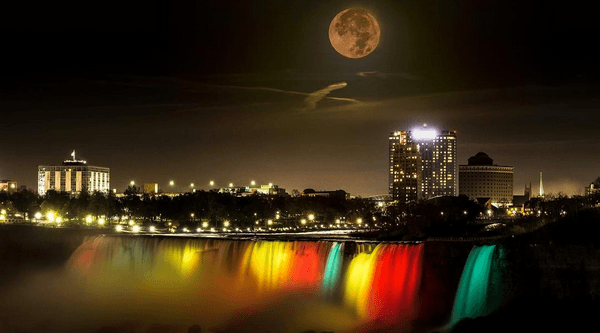 Niagara Falls sure is pretty in the winter.

The border town and its year-round midway is no doubt a tourist-y attraction, but in the lead up to the holidays and into the new year, it’s also home to one of
Canada’s most dazzling illumination festivals, the Ontario Power Generation Winter Festival of Lights.

Bundle up and drive out anytime from now until January 31st, to see The Falls lit up and the surrounding parklands decked out with twinkle lights and laser beams.

Meanwhile fireworks displays will light up the skies on Fridays at 9 pm in both December and January.

Rainbow waterfalls!!!! In awe with the beauty of Niagara Falls! Totally different experience for both day and night. Fun fact, do you know that it is actually comprised of three waterfalls: American Falls, Bridal Veil Falls and Horseshoe Falls and over 567,811 litres flow through the American Falls and Bridal falls per second. The Horseshoe Falls has a crazy flow of 2,271,247 liters flowing though the falls per second as well!!!

Make sure your come down and see all the beautiful light displays by the park and Dufferin Islands! #niagarafalls #travel #waterfalls #dufferinislands #christmaslights

A photo posted by Niagara Falls Canada (@niagarafallstourismcanada) on Nov 20, 2016 at 11:52am PST

Love the projection mapping in the city #niagarafalls

Next Saturday is the @opgpics @winterfestivaloflights Opening Ceremony! Complete with fireworks, spectacular costumes, captivating performances, and astounding music, this event is a can’t miss! #MovingNiagara #WinterFestivalOfLights

A photo posted by Niagara Falls Canada (@niagarafallstourismcanada) on Nov 18, 2016 at 6:16pm PST