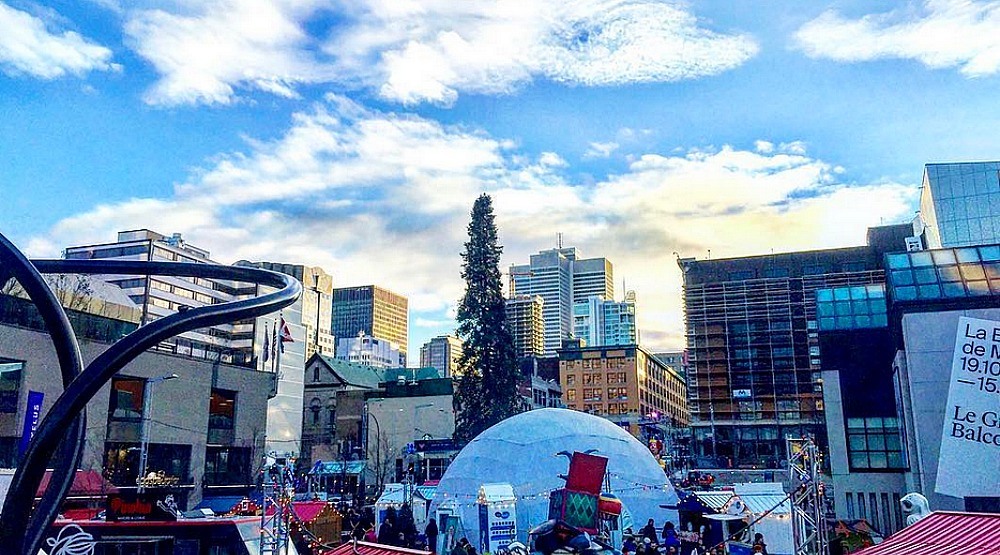 As stories go, rating a Christmas tree is as innocuous and unimportant as they come, but days later Montreal’s fairly sad attempt at one has so many people talking (mainly, ridiculing), that I felt the urge to add my voice to the watercooler cacophony.

Full disclosure: I’m not much of a fan of real Christmas trees. The notion of chopping down a perfectly healthy tree just so we can dress it up in shiny baubles and flickering lights while we await Jesus’ birthday has always seemed slightly silly and extremely wasteful to me.

I love the way pine and fir trees smell, but I like smelling them while hiking in the mountains where their roots are still firmly planted in the soil; not chopped down soon to be dropping pine needles all over your living room floor, only to eventually be placed out with the garbage anywhere between January 03 and March 15, depending on how much of a procrastinator you are.

But enough about my personal dislike of real Christmas trees and let’s discuss how Montreal became the laughing stock of… well… pretty much anyone with a pair of working eyes:

if you thought montreal couldn't get any more embarrassing, this is the tree we have downtown to compete with ny's rockafeller centre tree pic.twitter.com/TrPFPyadDt

Montreal's Christmas tree looks like it was just released from Xmas tree rehab and needs any spare change you might have for a bus ride home pic.twitter.com/DbcHdy28M6

Let’s all agree on one thing right away. This is not a particularly pretty tree and there’s no point in arguing that it is. I can’t help but wonder who among our fine city bureaucrats took a lingering top-to-bottom look at its tall, lanky, spindly, slightly lopsided, non-triangular shape and said: “That’s the one! Put me down for that one!”

It didn’t quite happen like that, of course. It turns out that as part of Montreal’s 375th celebrations, Sapin MTL, a tree delivery company, proposed to the city that it could deliver a tree that was taller than New York City’s Rockefeller’s Centre Tree.

First of all, we have got to get a handle on this 375th-related mania! The celebrations haven’t even started and I’m tired of celebrating. I don’t know who ultimately decided that 375 should be that big of a deal, but we need to not jump on anything and everything proposed. It’s a little too desperate and Montreal is a lot of things, but we’re not desperate.

Second of all, who in their right mind makes such an ambitious braggadocio promise and goes ahead and makes it public before having even found that supposedly taller tree that will dwarf the Rockefeller Centre one? And then, when said tree comes short (oh… by approximately 7 FEET!) we somehow make that promise public knowledge and open the door to ridicule far and wide.

Wait, there’s more. While the New York tree is topped with a Swarovski star made of 25,000 crystals, ours doesn’t even have a top! To add insult to injury, it lost it during transportation. And in lieu of crystals our tree is decorated with…get this… Canadian Tire logos! I don’t care if the company sponsored the cost of installing the tree at the Quartier des Spectacles. It’s bad enough we have an ugly tree; we also have to deal with ugly ornaments too?

In just one day, our Charlie-Brown tree was written up by Mashable, the National Post, Buzzfeed News, People Magazine and so on. And just when we thought it couldn’t get worse, the The Today Show decided to administer the fatal blow by humiliating us on TV. Just watch the footage. Listen to the giggling as the camera spans its length.

To his credit, co-host Matt Lauer tries to gallantly excuse-defend us by assuming we may have chosen that tree on purpose because “it’s a pretty artsy neighbourhood”. Bless your heart, Matt, but unless I see a scarf draped around the tree’s non-existent neck while it’s slowly reading Bukowski to me and telling me about how using a typewriter feels more authentic, there’s nothing artsy about it.

It’s just odd-shaped and a little sad looking. It’s a tree; I can say that without hurting its feelings.

Unlike the unanimity of mockery and bemused scoffing around the world, the reactions here at home have been mixed. Some are annoyed. Some are angry. Others have been rocking themselves back and forth constantly pointing out the gorgeous Christmas trees in Old Montreal, as if to remind everyone that we, too, can have nice things

And, yes, a few of us are just embarrassed. I mean, it’s barely been a day since YouTube video footage of that epic snow pile-up made the news around the world and now this? If anyone’s supposed to know how to do winter, it should be us.

But, ultimately, what I love most about this “controversy” is that it really isn’t one. Most of us are genuinely enjoying the commotion and joining in on the self-deprecating fun. Montrealers are the first lining up to take Instagram selfies with the much-maligned tree and they won’t stop tweeting about it.

I like it. Needs a traffic cone star and it would be perfect. https://t.co/kqpR5vWVGX

People are making fun of the Christmas tree they put up in Montreal. All of you should treet others the way you want to be treeted.

#Montreal must embrace its awful #ChristmasTree. Turn the fail into a win. “Come see the exact opposite of the #NewYork Rockafeller Tree!”

The tree even has its own Twitter account (@sapinlaid) (translated as “ugly fir tree”) and, of course, it has joined the fun, claiming tongue-firmly-planted-in-cheek that its ugliness is proof that Montreal is a tolerant city.

Honestly, at the end of the day, so much public mocking and ridicule will only serve to make us protective of our ugly tree. We’ll become the mother who grudgingly admits her son Timmy isn’t too bright, but don’t you dare say anything mean about him!

It’s eerily how we behave when an outsider badmouths our city. Sure, it’s a hot mess most days, but it’s OUR hot mess and so you leave it alone!

So let’s just enjoy the tree, laugh at the tree, laugh with the tree, drink under the tree, defend the tree, or openly mock the tree. It’s all good. Just don’t get too attached to the tree, because like all the others, it’s ending up on the garbage heap after the “Magic of Christmas” is over.

Not even Charlie Brown will be able to save it then…