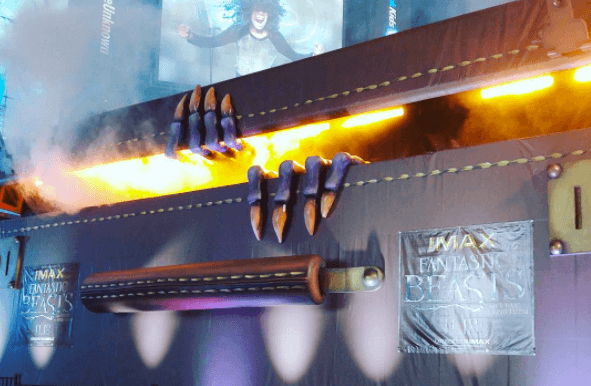 It was all about No-Majs, Muggles, and Wizards on Wednesday at Yonge-Dundas Square.

Part of the downtown Toronto intersection was transformed into a magical world of costumes, props, and magic in anticipation of the upcoming release of J.K Rowling’s Fantastic Beasts and Where to Find Them.

With the new film being released in theatres on November 18, IMAX and Warner Bros. Pictures Canada brought a little magic to Toronto, and opened it to fans, who got to step inside Newt’s suitcase and participate in onsite activations.

In case you missed it, check out some of the photos from the awesome set below.

Stuff is going down at #yongeanddundas , magical stuff :3 #fantasticbeastsTO #toronto

Some serious nerdy Harry Potter indulging. On such a downer of a day it was fun to do something like this. Perks of living at Dundas square! #FantasticBeastsTO #yongeanddundassquare #dundassquare @dundassquare … #jkrowlingmakesmefeelbetter

I don’t get out to a lot of things in the city for the most part, but we got to see the Fantastic Beasts & Where To Find Them Fan Experience this evening and it was such fun! The costumes are beautiful and I captured as much as I could without getting in the way too long. Those to come soon, some in my instagram story in the meantime. I brought the good camera though, so those are just some rough snaps from my phone for now. Starting the day with magic was so lovely! Thank you for doing this in the city where I live, @WBPicturesCan #FantasticBeastsTO #toronto #to #dundassquare #fantasticbeasts #potter

So, today I cried because I got to go to a free and random #fantasticbeasts exhibiton.

Mr. Scamander, what have you done?! #fantasticbeastsTO

Catch Newt at #FantasticBeastsTO before time runs out! Find us at @ydsquare and try out #LEGODimensions today until 9!