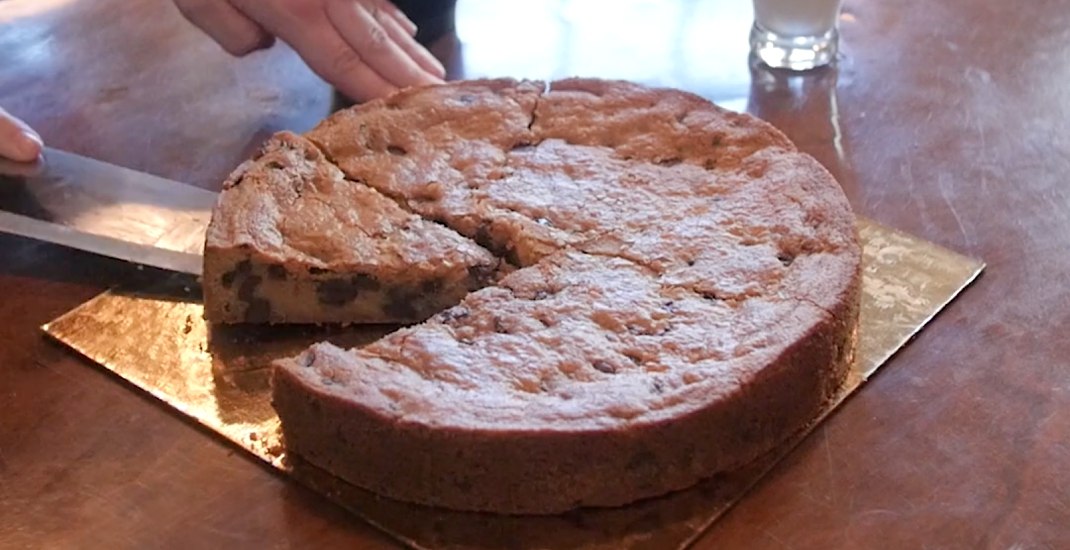 Le Gourmand is home to some of Toronto’s best chocolate chip cookies.

Baked throughout the day and served warm featuring molten chocolate embedded into just-barely baked dough, these cookies are classic and so crave-worthy that they’ll cause even the occasional cookie aficionado can hulk out into a total cookie monster.

The original cookies are bigger than average already, but now you can get a GIANT version too.

Originally commissioned as a birthday present for the founder of Toronto’s Chocolate Chip Cookie-Off Sol Orwell, the giant baked good is now for sale to the public.

Orwell hosts the annual competition and convinced Le Gourmand owner Milton Nunes to sell the giant versions with the caveat that the new off-menu item was named after himself.

I’ve always wanted a food item on a menu named after me, and what would be more me than a gigantic ridiculous 6000+ calorie chocolate chip cookie… my relentlessness paid off, and the man agreed to put it on sale. He’s already had a few people order the beast they all loved it.

The Sol Orwell Cookie, priced at $22 weighs in at 1.5 Kg and is the equivalent to ten to 12 regular sized cookies. A smaller version, equalling six to eight cookies can also be purchased for $15.

Just don’t expect to find the giant cookies cooling on the baking racks in the window – they can (and should) be ordered in advance.

For a chance to vote on Toronto’s best cookie for yourself, you’ll have to wait for the next Cookie-Off happening July, 8 2018, which aims to raise funds to be divided among a number of local charities.