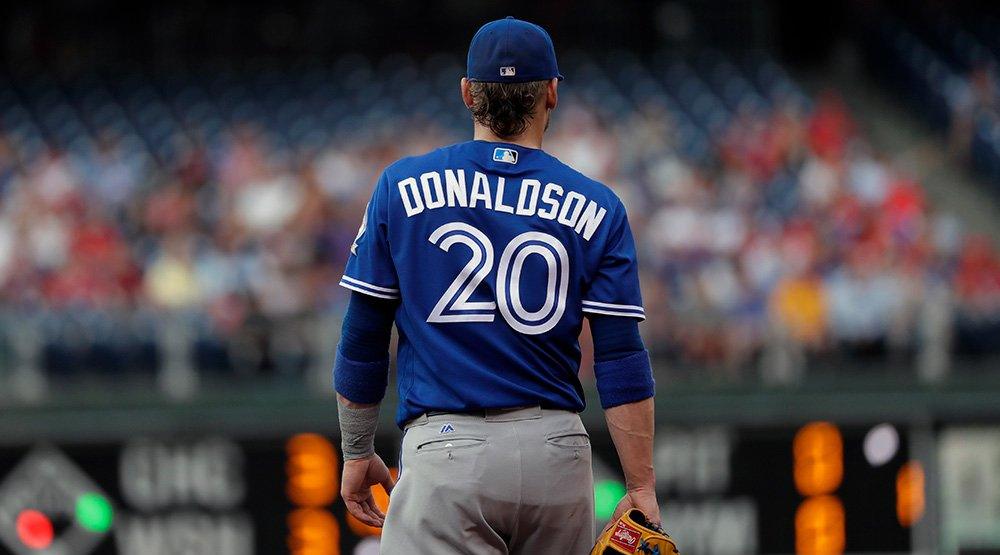 It looked as though Josh Donaldson had played his final game in a Blue Jays uniform. Now, this latest development just threw a wrench into any plans the Jays had to unload him before Friday’s waiver trade deadline.

Now, he may not be on the move after all.

Donaldson was rushed along this week to get ready for a rehab stint with the Dunedin Blue Jays – the Blue Jays’ Single-A minor league affiliate in Florida. He got into a rehab game just in time on Tuesday, narrowly avoiding a rained out game in Dunedin.

Then on Wednesday, Sportsnet’s Shi Davidi reported the Bringer of Rain wouldn’t play in the next game due to his nagging calf injury. If the Blue Jays were hoping to make a clean break from their All-Star third baseman this week, things just got extremely complicated.

Hearing Josh Donaldson won’t be in the lineup at single-A Dunedin tonight due to soreness in calves and legs. #BlueJays

Once the wheels were set in motion and Donaldson started his rehab assignment on Tuesday, the Blue Jays essentially had 72 hours to make a trade happen. Everything needed to go right for him to even meet the criteria to be traded. After this latest setback, the chance of a deal getting done by 11:59 PM on Friday has been completely derailed.

Prior to this news, it was already highly unlikely the Bringer of Rain was coming back to Toronto. Ken Rosenthal of The Athletic noted that when it comes to factoring the 32-year-old into their future plans, the Blue Jays “want Donaldson gone.”

After this latest turn of events, it’ll be that much harder for the Blue Jays to rid themselves of the former AL MVP. After missing 97 games due to injuries last year and 35 games last year, Donaldson’s value had already cratered. Now, it’s practically non-existent.

If there’s a contender who’s willing to make the Hail Mary of all trades, all the power to them. But there’s virtually zero chance anybody’s willing to give up anything of consequence for 2018’s most enigmatic baseball player.

Where do the Blue Jays go from here?

At this point, it completely hinges on Donaldson’s health. If this was just a minor setback, he could rehab in a few more games and potentially return to the Major League roster and finish out the season with the Blue Jays.

During the offseason, the team would then need to decide if they’d want to extend a qualifying offer Donaldson for the 2019 season, which is close to $18 million for one year. A fair price for an MVP-calibre hitter, but a lot of money to pay for someone who’s played less than one full season since the start of the 2017 campaign.

There’s also a chance this calf injury sidelines Donaldson yet again and he doesn’t make it back to the Blue Jays before September 30th. This seems like the likelier of the two scenarios.

This calf injury has hampered Donaldson for three months now. Ordinarily, 12 weeks seems like ample time to rehab a bad calf. Yet here he is still dealing with the same injury that sent him to the disabled list last year.

The difference is Donaldson re-emerged from his calf injury last year and went gangbusters in the months of August and September, clubbing 22 home runs, driving in 47, while posting a batting line of .302/.410/.689 with a 1.108 OPS. That’s the dominant Donaldson fans knew and loved.

The 2018 version of the Bringer of Rain is a far departure from that.

If this is how the Donaldson era ends in Toronto, it’s a shame that things had to devolve this way; a rushed rehab stint in an attempt by the Blue Jays to get pennies on the dollar.

It feels like this organization can’t move on quickly enough from him; whether or not he’s healthy and regardless of the return he could fetch in trade. Not exactly the way anyone pictured this scenario ending … with Donaldson limping out of town.