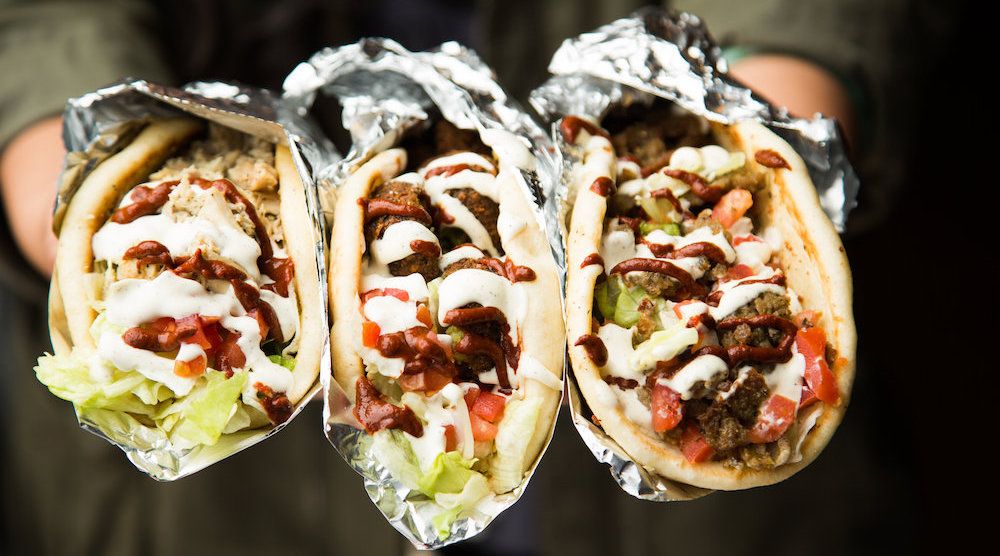 “There’s no secret menu at The Halal Guys, our secret sauce is secret enough,” newly minted The Halal Guys franchisee Imran Momin tells me from their flagship Yonge and Wellesley location.

Known for their “chicken, rice, white sauce and long lines,” Momin and his business partners leaped immediately at the opportunity to bring the famous New York brand to Canada when the franchise came up for grabs.

In case you weren’t aware of their history, the wildly popular The Halal Guys started in 1990 as New York street food booth/hot dog cart, serving up the NY street food staple, “chicken rice” (similar to chicken shawarma) with “white sauce”, made of mayo and secret spices, their fiery “red sauce” a North African-style harissa hot sauce, and tahini.

Their secret weapon was the halal recipe, providing sustenance for an underserved Muslim cabby population, and the halal process also appeals to those who lean towards animal rights as, much like Kosher foods, the animals are slaughtered humanely. 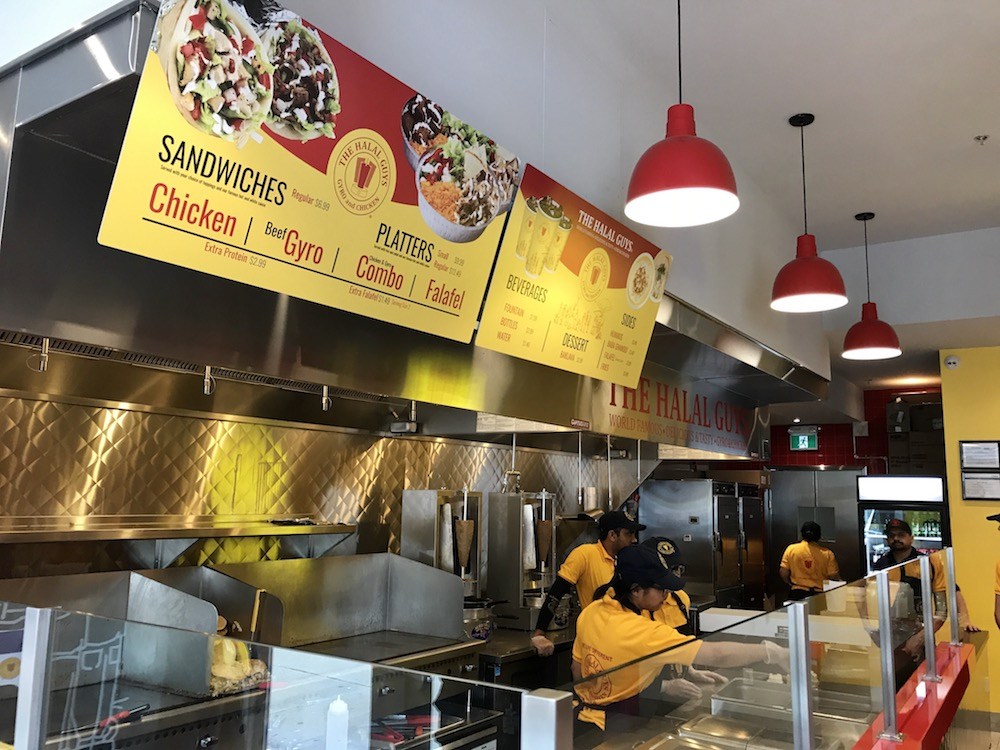 So how does it all go down? I’ve not tried the New York recipe so I can’t compare, but what I can say that the chain has going for it is their pillowy-soft and springy pita bread that brings tears of joy to gluten lovers. It’s much like the pita I still dream of from past trips to the Middle East, sorely lacking from Toronto’s shawarma joints. Wraps and platters are dressed with the standard selection of salads, pickles, peppers any falafel/shawarma joint fan would be familiar with, including whole pitted Kalamata olives–a nice touch.

The beef and chicken had a clean and natural taste–a plus for the purists. Neither were heavily spiced or overly garlicky, while the white sauce offers the tanginess of mayo with and subtle spices, and red sauce has the explosive fire of a North African harissa. Crunchy but melt in your mouth-phyllo wrapped walnut and rosewater heavy baklava ($2.99) is available for dessert.

Read on with the interview to find out more about the latest American quick-serve diner to cross the border with new franchise co-owner Imran Momin whose experience in restaurants started at a young age when his parents opened a vegan restaurant in Gujarat, India. 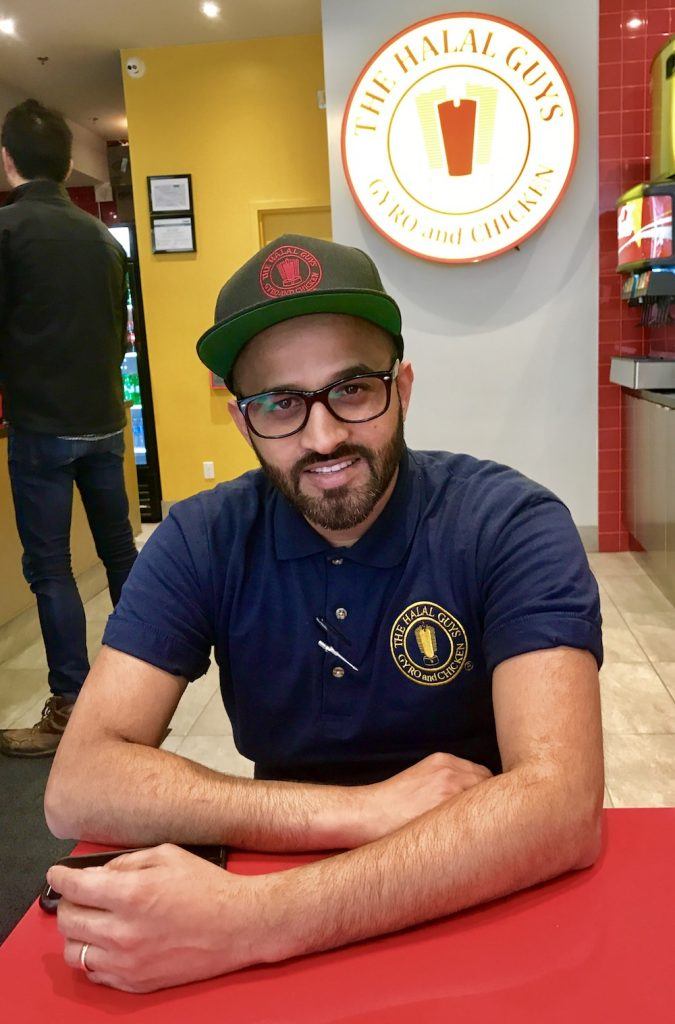 What got you into the food business?

Imran: It was always my dream to open up my own restaurant. My family runs a sit down 100% vegan restaurant in the small city of Siddhpur, Gujarat. Meat is expensive back home so people prefer vegetables. That’s typical Indian culture.

Makes sense! How did you get into business with The Halal Guys?

Food is our business and it’s always been my passion. I was working at a KFC and managing a Harvey’s restaurant in Kingston. Then I progressed to managing a KFC in Saskatchewan. One of my cousins and co-owners found the opportunity that The Halal Guys was franchising so we jumped on the bandwagon. Restaurant licensing was selling out and people were taking on territories in the states.  We thought “why not bring it to Canada?” Canada is close to New York. A lot of people have already heard about the brand and if we have them on our doorstep, it would be great.  We went through the whole process of applying and got approval.

Was there competition for Toronto?

No there wasn’t. As a matter of fact, when we were speaking to the owners, the moment they started taking franchises, we jumped on it. The owners were even wondering why nobody from Canada had applied yet.  We had to go through a strict process before we were approved because they care about the brand and less about the money.  They don’t want to give it to someone without experience. It took them 30 years to make the brand, they don’t want to just throw it away for some money. We applied and got franchises for Toronto and Montreal. There’s another owner in Montreal. 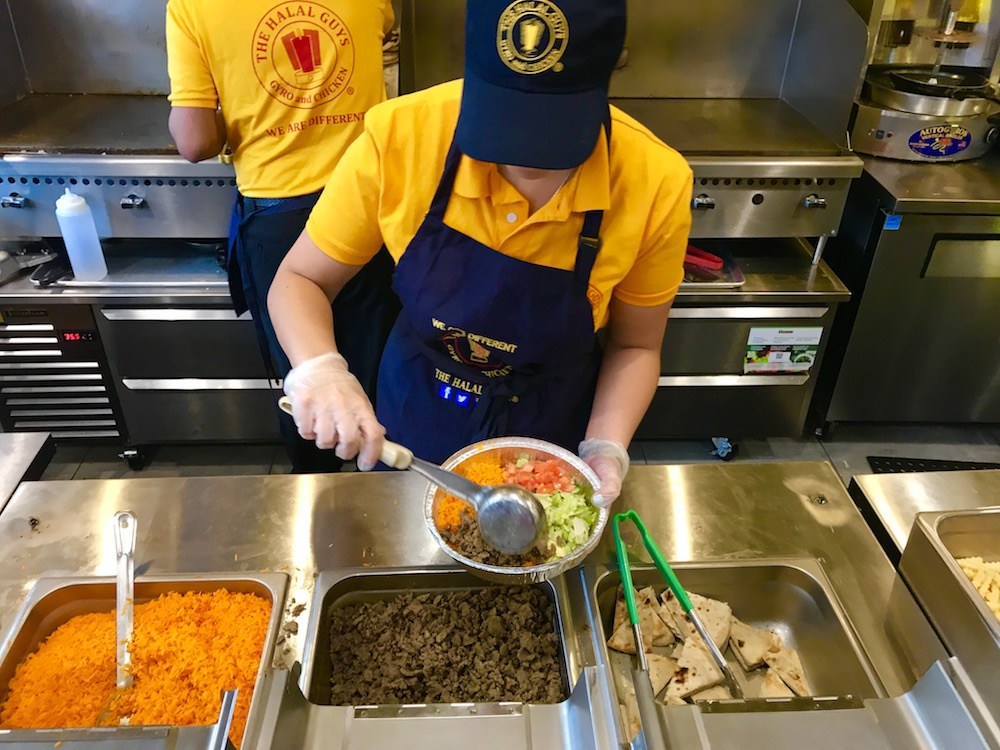 Were there any issues with food regulations or ingredients?

No, everything was already set up with the franchises before they agreed. Once we got approved, we gave our territories and we applied for locations. They already had a food supplier, the meat supply was set for us already.

Tell me more about what The Halal Guys has to offer.

We serve 100% halal foods. This is a touchy topic. Because our name says it all, it’s got to be halal. The chicken is 100% halal, the frozen gyros are 100% halal, and all the protein that we serve is halal too. we keep it very limited. We have chicken, beef gyros, which is 100% beef and spices, and we have falafel as a vegan option.  Our chicken is always fresh, never frozen.

There’s a misconception that we’re a shawarma place, but we don’t serve shawarma from the spit. We cook the chicken on a flat iron grill, we cook the gyro before serving it because it’s still uncooked when we shave it. That’s how we differ ourselves from the shawarma places. We are basically chicken and rice, or beef and rice.

Ok, so how does the orange rice get so orange?

We have a packet that’s already premade with the seasoning that’s supplied to us. We just have the recipe to follow. The orange is a nice vibrant colour, with no preservatives and the taste is very nice. It’s basmati with spices, like saffron.

How has the reception in Toronto been so far?

We had a lineup already during our soft launch days last week. We were expecting it. That’s what we are known for, “our rice, our white sauce, and our long line ups.” 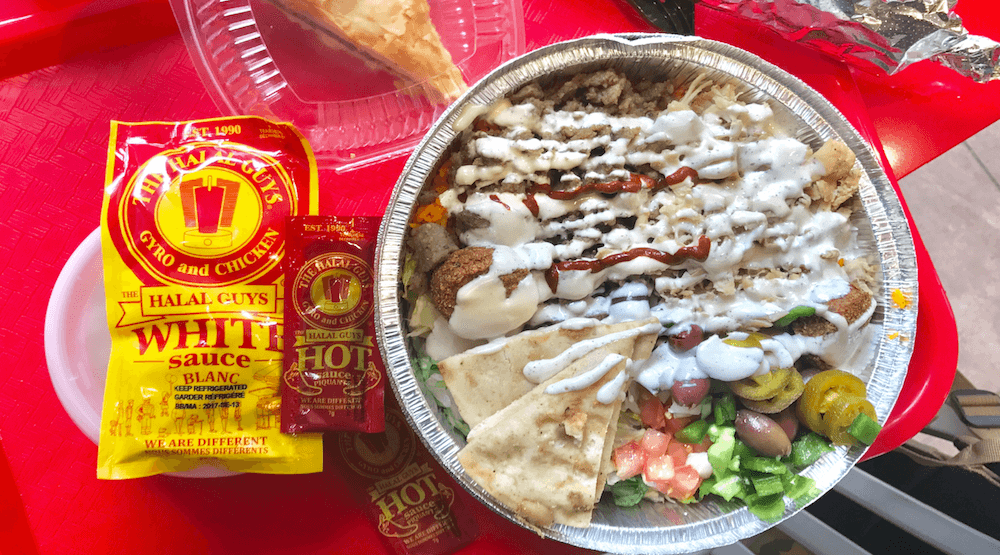 What do you think of the trend of American fast food chains doing pop-ups in Toronto?

My expertise says that I’m rather a brick and mortar place than a pop-up or food truck.  That’s not my level of expertise. I’m the guy who works in four walls in a restaurant-like setup.

Have you noticed other niche American food chains slowly coming to Canada?

Yes, I have. Like again, The Halal Guys is a brand that’s 30 years in the making. It wasn’t much of a hassle to get the recognition here rather than other food trucks or pop-ups coming in.  We are different. We already have the brand recognition, that’s what makes it a smoother transition coming into a new market.

For sure. It’s always easier to join a winning team than to start off on your own. Were you looking at other franchises before this?

No I wasn’t. I was working at a restaurant in Saskatchewan, Regina when this opportunity came up so I didn’t even look at others. It was my dream to open my own restaurant but I never knew it would be The Halal Guys. This offer came to me, I did my research, and I thought it would be great and I jumped in.

What is market research saying? Is there a demand for halal foods in Toronto?

Yes. In the real world, halal is no longer restricted to Muslim communities.  People want halal foods.  Halal’s meaning is “permissible”. Something that’s humanely raised, and humanely slaughtered. It’s the kind of meat that’s never been sick. It’s on a similar level to Kosher but we are different from Kosher.  It’s a growing trend in Toronto as well. We even have our own Halal Food Festival. You can see the popularity halal food has gained in Toronto, and Canada overall.

This interview has been lightly edited and condensed for clarity.