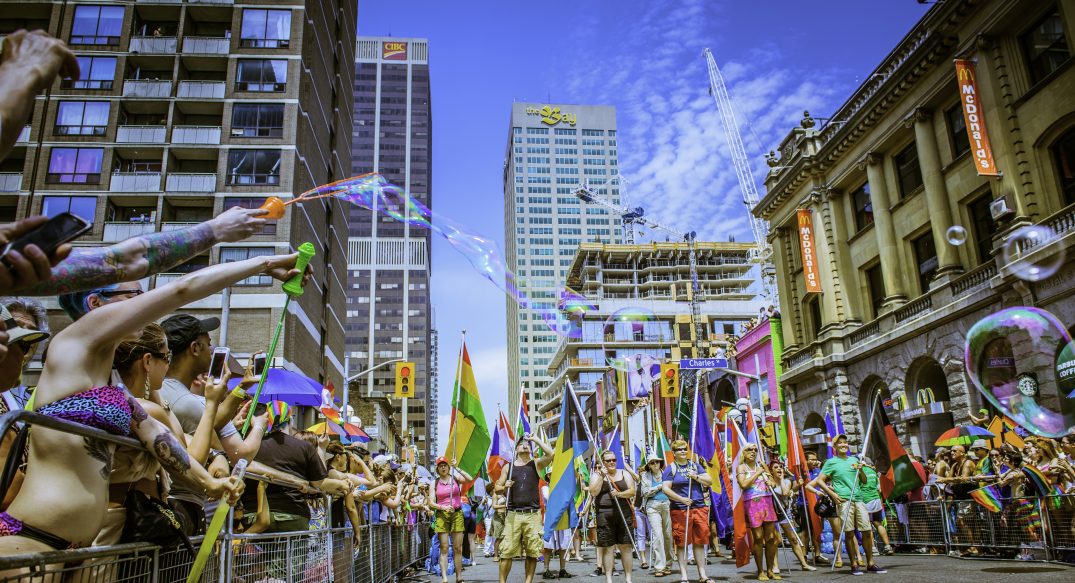 From family festivities to beach parties, the city is celebrating from June 1 to 25 with inclusive events throughout the community.

With a jam-packed calendar, here’s our guide to Pride Toronto month events you shouldn’t miss. And be sure to check out the full list here.

First Thursdays have become one of the city’s hottest parties all on their own. So imagine what happens when queers take over the programming for one night only? Yup, Toronto’s biggest art party celebrates the launch of Pride Month for the third year in a row with music, performance art, and speakers. Inspired by Pride Toronto’s mandate and this year’s focus, the gallery is completely taken over with music, dance, stories and art, told through the eyes of this year’s featured artists.

When: June 7 at 7 pm
Where: Art Gallery of Ontario

Cannonball into Pride Weekend with the official kickoff party at one of the most stunning venues in the city. Pride Toronto with returning to Cabana Pool Bar for one night only, as LGBTQ2S+ folks take over the entire space to dance, swim, sip cocktails, and take dozens of photos with the jaw-dropping view of the city skyline as backdrop. It’s bring-your-bathing-suit-to-work day: this pool fiesta starts at 6 pm.

The Candlelight Vigil is an event many in the community look forward to as a place to come together, talk about the people they love and have loved, and honour those we’ve lost.

Toronto’s Trans March is officially one of the largest, most exciting Pride events in the world – not only for all the trans and non-binary folks, friends, and allies who rally and march together in solidarity, but for anyone who is lucky enough to witness the landmark event. Trans women of colour and differently abled people are encouraged to lead the march and set the pace for all.

The Toronto Dyke March is a political demonstration of critical mass, welcoming all self-identified dykes to create political and visible space. This grassroots event is not a parade. The women and trans people of the community take over the streets of downtown Toronto to celebrate our power, strength, diversity and passion of their experiences and identities.

Drag Ball has steadily grown into the marquee drag show for Pride, featuring international queens, a who’s-who of the top Toronto queens and kings, and a few surprises. Bigger hair, bigger stunts, bolder dance moves, and everybody out to slay, this year is no exception.

Now in its 18th year, Family Pride is a fun-filled oasis on the grounds of Church Street Public School that gets bigger and better every year. With programming geared to those 12 and under and their families, everyone will feel like a kid while taking in the creative and engaging activities, including sports, crafts, face painting, storytime, and extra-special performances.

When: June 24 at 2 pm
Where: Bloor and Church St. to Yonge-Dundas Stage

Costumes, choreography, and colour! Stand loud and proud with more than 120 groups marching in Pride Toronto’s Pride Parade, one of the largest in North America. This is the weekend’s premier event, bursting with performances, floats, marchers with messages, queens, kings, outstanding community groups, and more glitter than you can shake a disco stick at. The procession starts at 2 pm at the corner of Bloor and Church and stomps its way down Yonge Street to the Dundas Square stage.

When: June 23 to 25
Where: Church Street Public School

When: June 24 at 6 pm
Where: Christie Pitts Park