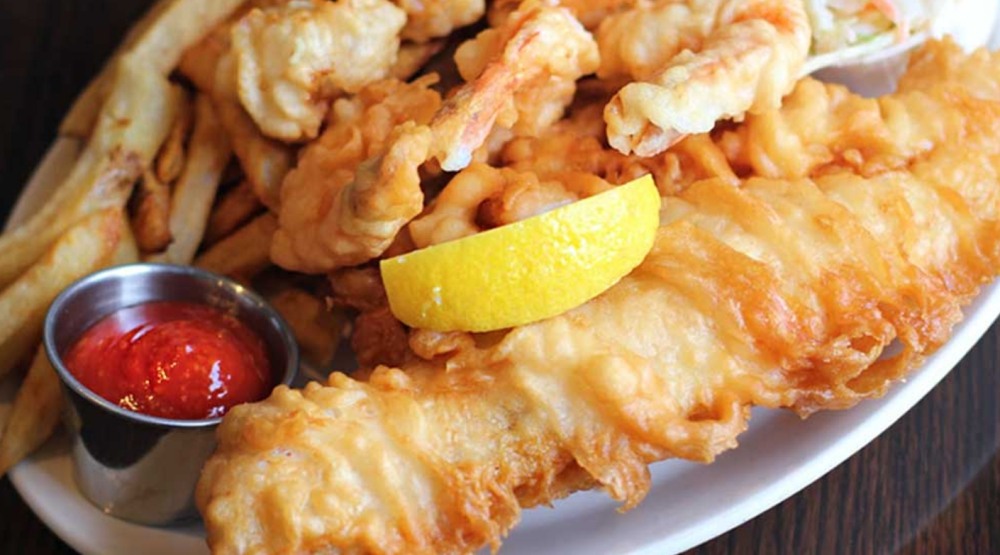 There’s not only plenty of fish in this city but also a dozen excellent kitchens to cook ’em.

Let this St. Clair West chippy bewitch you with its Ocean Wise-friendly menu. The selection includes everything from haddock and halibut to trout, cod and pickerel, beautifully battered and fried to a golden crisp.

This fish ‘n chip outfit with a location in Kensington Market and another on St. Clair West offers a plenty of fish to choose from. Haddock, halibut, cod, and salmon are all on the menu along with exceptional sides like a killer poutine and deep fried pickles.

Since 1930 this stalwart near Main Street Station has been dishing up battered fish and seafood specialties along with hand-cut fries, slaw, and slices of pie.

With a full bar, broad seafood-focused menu, and quirky eclectic decor, this proper sit-down restaurant in Riverdale is positively date-worthy. Of course they do take out too, so if you want your three fish in a basket to go it’s no big deal.

Crispy haddock and chunky garlic potato wedges with a side of slaw are an easy favourite from this quick service eatery from the same folks behind the swanky temple to seafood next door, AKA The Chase Fish & Oyster.

Crazy creations are what this kitchen north of Toronto is known for but don’t let the beastly burgers distract you: the fish and chips are very worthwhile.

This gem in Harbord Village is a favourite with the locals who like to slide into the picnic tables outfront on a sunny day to un wrap their newspaper package filled with crispy battered fish with fries.

British ex-pats have owned this Leaside chippy since 1992, though the had been perfecting their craft as far back as 1969 in England. Not only can you get a proper fry up at this joint, but they also offer mushy peas.

Fresh Off The Boat

Everyone on Instagram seems to opt for the lobster rolls, or crab-topped fries, or soft shell crab sandwich with claws beckoning from between the buns, but FOTB is reverential when it comes to the classics. Fish and chips are offered with halibut only and served with fresh cut fries, house-made tartar sauce and broccoli slaw.

Great Scott! This North York establishment serves everything from fish & chips to steak and kidney pie, and mushy peas and tattie scones. Sticky toffee pudding for dessert and Irn Bru will surely seal the deal for home-sick Scotts.

The One The Got Away

With two locations in Toronto there’s less chance for to let this one escape. We’re not talking about the love of your life though, just excellent examples of fried haddock, halibut, artic char, pickerel and cod, either on a bun or in a basket with crispy fries and tangy tartare sauce.