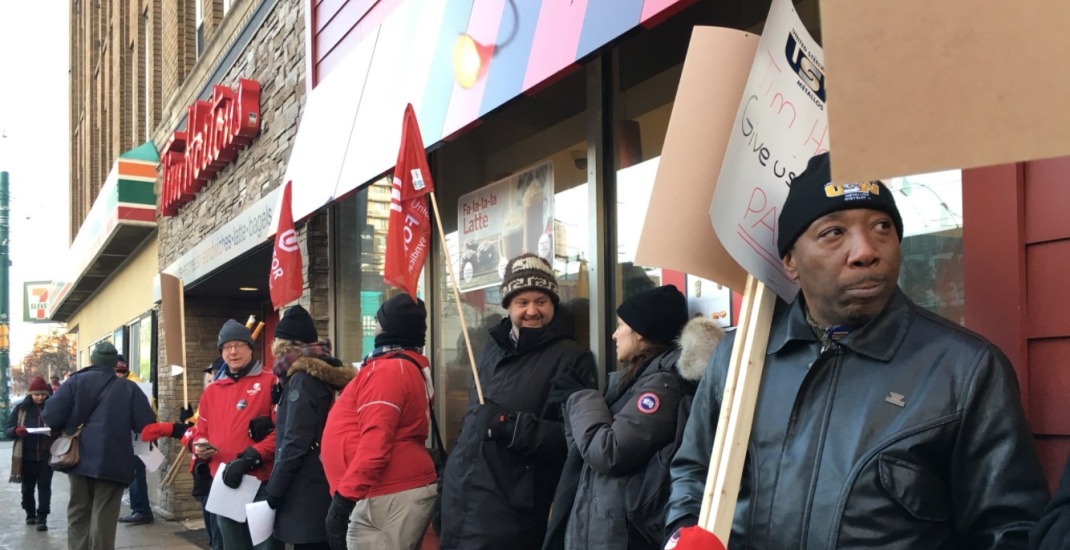 More than 15 protests are planned outside Tim Horton’s locations in communities across Ontario today, January 10 with the earliest having taken place in Toronto at 8 am this morning.

We ❤️ workers at the Markham / Lawrence Tim Hortons, solidarity!! This is the @TimHortons store that banned employees from accepting tips (NOT legal in #OnPoli) in response to $14 #minimumwage. https://t.co/rRn1ippLmi #boycottTimHortons #15andFairness pic.twitter.com/iYSJnf6Ky7

We won a $14 minimum wage, then #TimHortons cut paid breaks, uniform allowances, etc. This is unacceptable. Their parent company, RBI, made $3B in profits in 2016. They can afford to treat their workers with respect. #15andFairness pic.twitter.com/wEREC82Xnj

The day of action is taking place in support of Tim Hortons’ workers facing cutbacks to benefits and paid breaks implemented to offset the minimum wage increase that came into effect in Ontario on January 1, 2018.

Advocating for Ontario workers, the Fight for $15 & Fairness campaign calls for a day of action “to demand that Restaurant Brands International (parent company of Tim Hortons) takes whatever steps necessary to ensure that its workers` wages and working conditions are protected.”

In addition to the actions organized on January 10 outside Tim Hortons stores, the Fight for $15 & Fairness has also set up a petition to “Tell Tim Hortons: Stop rolling back workers’ rights!”