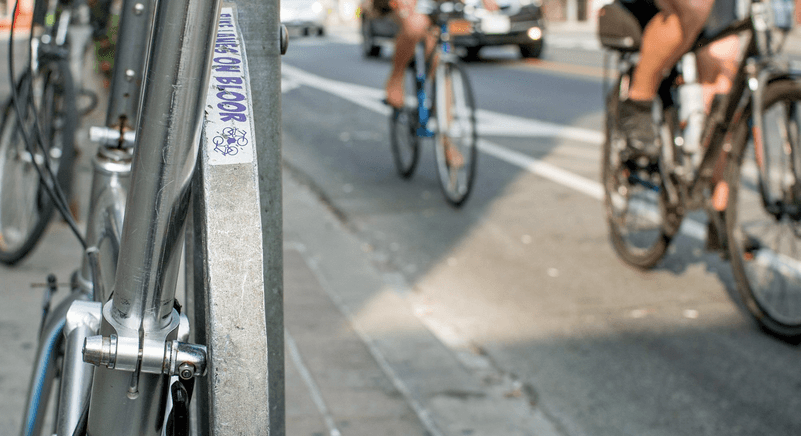 As part of a year-long pilot project, the City of Toronto announced the installment of the bike lanes earlier this summer to measure the impact of cycling infrastructure along the busy downtown street.

The project will be assessed through an evaluation designed to measure impact on local businesses, traffic flow, cyclists, pedestrians and parking, according to the City.

“Bike lanes on Bloor Street are long overdue,” said Councillor Joe Cressy (Ward 20 Trinity-Spadina). “I’m confident that the pilot will demonstrate that cycling infrastructure, when it’s done right, is a win-win for everyone. From Shaw Street to Avenue Road, let’s ride Bloor safely, together.”

Commuters on Bloor Street will now find the painted buffer for the cycle tracks. One lane of traffic in each direction has been removed, and turn lanes have been added at intersections. As for street parking, it will be maintained on one side of the road and alternating as appropriate.

Spoke with one of TO’s many bikers Wednesday. He shared his love for the Bloor Street bike lane instalment. pic.twitter.com/Oc4nKgxaD7

Because it is a pilot, a public feedback survey will be available starting this fall. More information will be available through the City of Toronto soon, and a full evaluation is expected in the fall of 2017.

Press conference/bike rally to mark the official opening of the Bloor Street bike lane – 25 yrs in the making. pic.twitter.com/yy9MAt3gPl