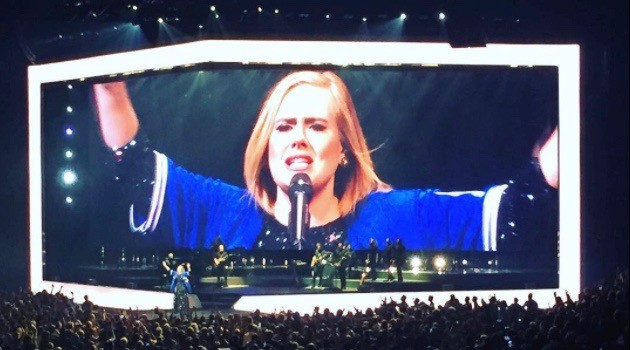 Adele, world superstar and infamous stage chatter, has been in Toronto this week performing four sold-out shows at the ACC.

Two days ago we told you how she brought a couple on stage and adorably grabbed a selfie with them and their baby. ‘Cause this is Adele’s world and we’re all just saying hello.

Well, now she’s gone ahead and endeared herself to this city forever.

At her concert last night, after the Jays had dismantled the Texas Rangers and left them looking like a little league team trying to play with the big boys, Adele adorned a Jays jersey as she belted out her last few ballads in an encore performance, including Rolling in the Deep – which we can only assume was a reference to the defeated and deflated Rangers.

Talk about winning the crowd over.

Just watch. But don’t blame us if you fall in the love with Adele even more than before…

Adele closes the show with Rolling in the Deep decked out in a #BlueJays jersey! #adeletoronto pic.twitter.com/d27OYpjkYD