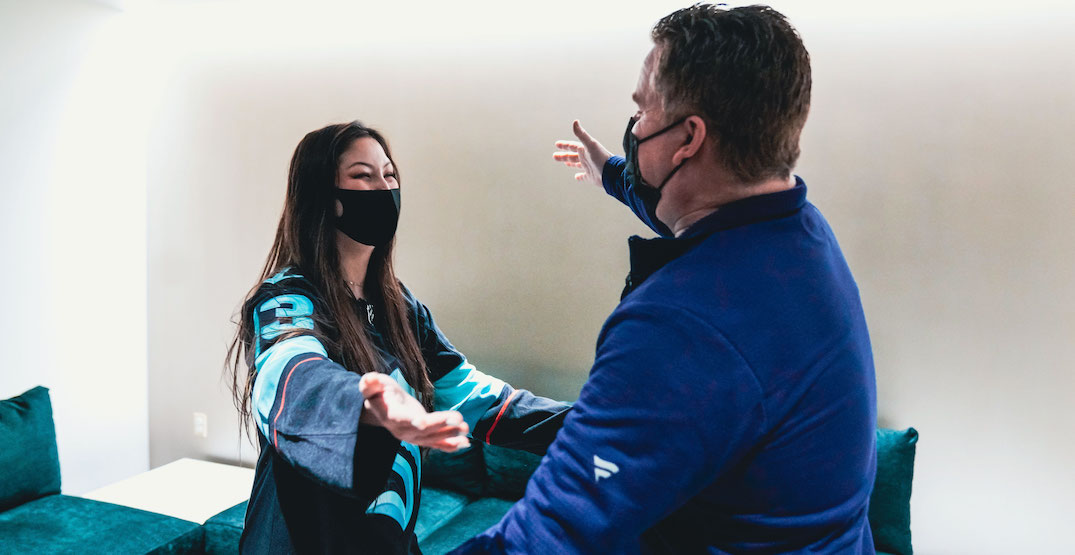 It’s still the most heartwarming story of 2022.

Sitting behind the Canucks bench at the first-ever Seattle Kraken home game on October 23, Popovici spotted a concerning mole on Red’s neck. Through the chaos of an NHL game, Popovici somehow got Red’s attention, telling him to get it checked.

Thankfully, Red did just that. The mole turned out to be cancerous and Red was able to get it removed.

When the Canucks returned to Seattle for a January 1 game against the Kraken, the team used social media to find Red’s hero. She was quickly found and the pair met for the first time.

Red and Popovici have conducted countless interviews since, and Nadia was given a hero’s welcome when the Kraken visited Vancouver in February.

And now, Red and Popovici are being recognized by the NHL.

Among the presenters at the NHL Awards in Tampa next week will be Red and Nadia, the league revealed today.

“The presenters for the 2022 NHL Awards include individuals whose stories of resilience moved and inspired the hockey community this season,” the NHL said in a media release today.

Actor Kenan Thompson is hosting this year’s award show, taking place between Game 3 and 4 of the Stanley Cup Final. Sportsnet is televising the NHL Awards, which begin at 4 pm PT on Tuesday.

“Other inspiring figures presenting during the live show include Calgary Flames assistant general manager and ALS survivor and advocate Chris Snow as well as his wife, Kelsie, and children, Cohen and Willa; Milton Academy (Mass.) hockey player Jake Thibeault, who was paralyzed by an injury in September 2021; and emergency backup goalie Thomas Hodges, who overcame blindness in one eye to play in a game for the Anaheim Ducks this season,” the NHL also announced.

Martin Lafleur, the son of the late Guy Lafleur, will also present an award.

“To be able to highlight some of the most moving stories and inspirational figures from the past year in hockey on this year’s show is awesome,” said Steve Mayer, NHL chief content officer and senior executive vice president. “With all eyes on the game’s best players, we hope to also recognize these great individuals whose presence in Tampa is sure to be an emotional highlight of the evening.”

Other presenters include Elliotte Friedman and David Amber from Hockey Night in Canada, as well as Kevin Weekes and Ashley Brewer from ESPN.

While some of the NHL’s annual awards have already been revealed, five prestigious ones have not. Trophies set to be handed out on Tuesday include the Hart Trophy (most valuable player), Vezina Trophy (top goaltender), Norris Trophy (top defenceman), Calder Trophy (rookie of the year), and Ted Lindsay Award (most outstanding player as voted by the players).