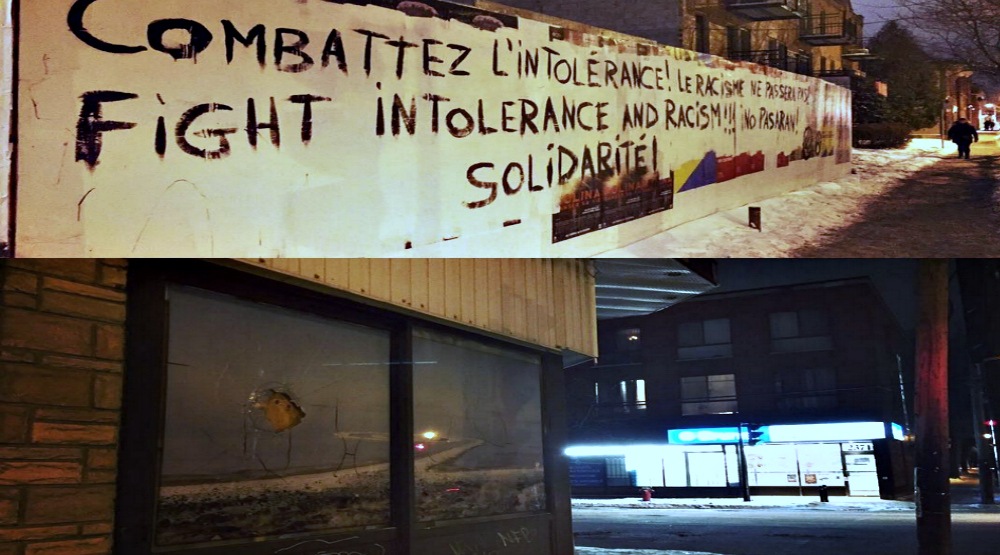 Just days after Alexandre Bissonnette opened fire in a Quebec City mosque, killing six men and injuring 11 others, a mosque in the city’s Pointe-Ste-Charles neighborhood has been vandalized.

What makes this particularly egregious and unfathomable was that the victims of that terrorist act (and not the perpetrators) were Muslim. Why would anyone react to a horrible attack inflicted on Quebec’s Muslim community by terrorizing them even more? Even more shameful, the vandalism took place on the very same day that three of the six men killed were being buried in Montreal in a public funeral. I suppose it would be too much for me to expect that hate and intolerance would take a day off out of respect for the dead, but even I was taken aback by the callousness and heartlessness displayed.

The Khadijah Masjid Islamic Centre in Pointe-Ste-Charles was spray-painted with graffiti, a window was smashed with a heavy object, and it was egged. Police are investigating it as a hate crime, but stated that they are also investigating the possibility of other motives, although what other motives there may be, I’m not sure. As far as I’m concerned this was a message – loud and clear – that, while the vast majority of Quebecers and Canadians are horrified at what just took place in Quebec City, a small hateful minority is not only indifferent to the violence, but perhaps even gleeful at the prospect of more.

While many here are still in deep denial-and-derail mode when it comes to addressing the issue of Islamophobia in Quebec (I wrote about that just a few days ago), recent research points to a rising problem. An excellent piece published this past November in the Montreal Gazette, cautioned us that hate crimes were increasing in this province and that hate groups like Sons of Odin and PEGIDA (European Patriots Against the Islamization of the West) were being emboldened by the anti-immigrant, anti-Muslim rhetoric coming from south of the border.

The numbers don’t lie; far-right, neo-Nazi groups, often wrapping themselves in identity politics and uber-nationalistic fervour, are rising in Quebec. We can continue to deny it and play the “but we’re not more racist than the rest of Canada” game, we can continue to claim these incidents are isolated exceptions and in no way connected, or we can start to connect the dots and stamp out the fire in our own backyard before it gets out of control.

Most Quebecers, thankfully, aren’t having any of this Islamophobia. The public funeral yesterday was a beautiful display of unity and allegiance, as thousands came out to pay their respects and show their support to the bereaved families and Quebec’s Muslim community in its entirety. The speeches delivered by politicians of all levels of government spoke of diversity as strength and about inclusion. But it’s not just enough to rally together when something this heinous occurs. It’s not enough for our politicians to speak of everyone being part of the Quebec family, if, when it comes time to campaign or seek to gain votes, they do it by fear mongering and playing on the ignorance and prejudices against the “other”, and directly or indirectly vilifying and throwing under the bus the most vulnerable and most marginalized of communities right now.

Thankfully, the voices of unity are louder than the hate. Craig Sauvé, the city councillor for the Southwest borough was quick to denounce the vandalism that occurred in his area. In a Facebook post he wrote:

“This, too, is terrorism. It is an action intent on inciting fear into the heart of a community, demonstrating hate and ill-will.

It won’t work though.

You know why? The congregation of Khadijah Mosque on Centre street are our sisters and brothers; they are members of the Point-St-Charles community and Pointers stick up for one another. Pointers help out their neighbours. Pointers show solidarity.

And that’s what the People of the Point, of the Sud-Ouest and of greater Montreal are going to do. We’re going to show our support and solidarity.

I don’t how who you think you are, you cowardly, small-minded xenophobe who did this, but YOU DO NOT speak for the community.

Sisters and Brothers of the Khadijah Mesjid, we got your back.”

A solidarity rally has been planned today at 2 p.m. for those who would like to swing by and meet members of the mosque and show their support.