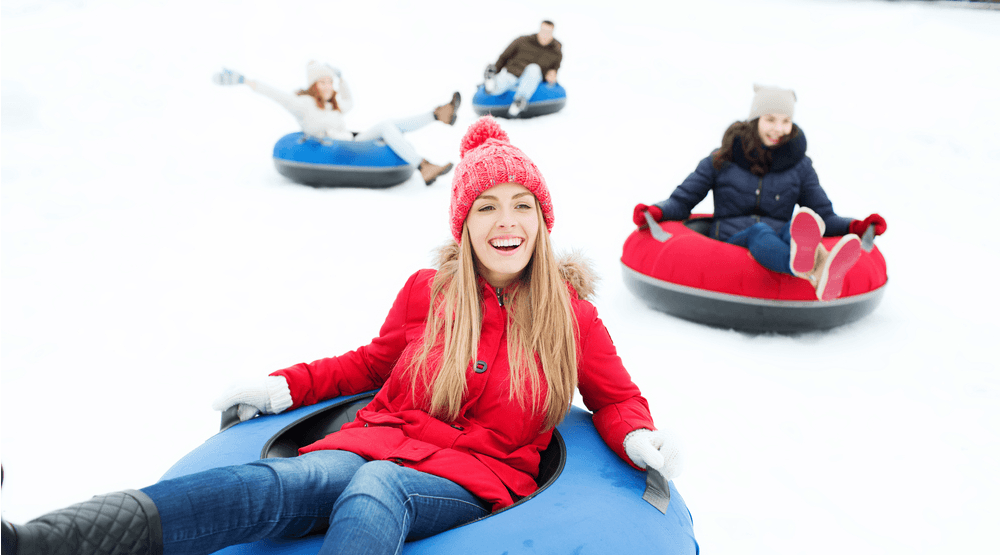 From snowshoeing to ice skating, there are plenty of ways to enjoy the chilly air and icy snow.
Whether you’re looking find a snow tubing hill in the heart of downtown or a little further into nature, check out 8 place to go snow tubing in and around Montreal.

Right next to Beaver Lake, you’ll find toboggan hill, meaning once you’re done with a romantic skating session on the ice, you can enjoy an afternoon of adrenaline-inducing snow tubing fun. Tickets are $9 for adults and $5 for children. Passes can be purchased from the Beaver Lake Pavilion. Oh, and it’s BYOIT (bring your own inner tube).
When: December 7-March 6, 2017
Where: Beaver Lake, Mount Royal

As if you didn’t have enough reasons to head to Parc Jean Drapeau this winter, a snow tubing hill will be set up as part of their annual Fete des Neiges. Inner tubes can be rented for $16, after which you can enjoy whizzing down the man-made slopes of Parc Jean Drapeau.
When: January 14-February 5, 2017
Where: 1 Circuit Gilles Villeneuve

This festival right in the heart of the Olympic Village is one of the biggest winter attractions in the city. Featuring ice skating, an outdoor bar, pop-up restaurants, and of course, snow tubing, there is tons of fun to be had at this snow-filled paradise. Though the site is free to access, snow tubing will cost you $5 per ride.
When: December 9-March 12, 2017
Where: Olympic Park

Five perfectly manicured snowy slopes will greet riders at the Laval Nature Centre. In addition to skating and snow sculptures, children and adults can rent inner tubes from the rental shop and then race each other down the snow tubing tracks.
When: December-March 2017
Where: 901 Avenue du Parc

This summer camp is open to the public during the wintertime, hosting a myriad of fun cold weather activities like cross-country skiing, ice skating, and snow tubing. They offer rentals on site, as well as season passes and daily passes. Daily access to the snow tubing slopes is $8 per person.
When: December-March 2017
Where: 2464 Boulevard Perrot, Notre-Dame-de-l’Ile-Perrot, QC

Located just over an hour from Montreal, Mont Avila is an off-island ski hill in the Laurentians. However, in addition to skiing and snowboarding, the mountain boasts some seriously awesome snow tubing slopes. Offering everything from rafts to innertubes, the public can whiz down any one of three trails and then be whisked back up to the top courtesy of the on-site lift. Adult rates starts at $23.99 for 2 hours.
When: December 17-TBA
Where: 500 Chemin Avila, Piedmont, QC

Tubing and luging are two of Mont Hatley’s most popular activities. Just 1.5 hours from Montreal, you can spend the day sliding down the snow-covered slopes of one of Sherbrooke’s finest mountains. Rates start at $18 for children and $23 for adults per day.
When: December-March 2017
Where: 4785 Road Capelton, Canton de Hatley, QC