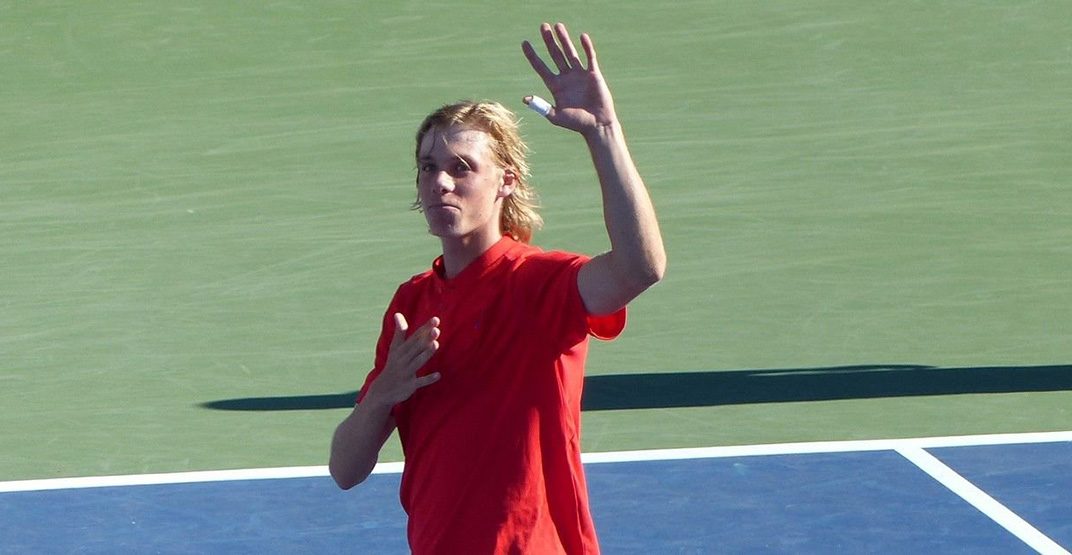 The kid nearly did it again.

He lost the first set. He fought hard in the second set. He broke serve. He had huge holds. He had everyone in Stade Uniprix on their feet late into the night.

But this time Denis Shapovalov didn’t get the win.

After beating top seed Rafael Nadal, former world No. 4 Juan Martin Del Potro, and Adrian Mannarino in the quarter final, the 18-year-old lost to fourth-seed Alexander Zverev 4-6 5-7 in the semi final on Saturday.

Against Zverev, Shapovalov wasn’t quite as sharp as he was against Nadal and Mannarino. At 4-4 in the first set, facing a break point on his serve, he double faulted – a crucial mistake which cost him the set.

Shapovalov was broken in his first game of the second set, but he broke back in the next game.

Then at 5-5 he double faulted again on break point to give Zverev a 6-5 lead.

Shapovalov fought hard in the final game that saw five deuces – he killed off two match points and had two break point chances himself before losing on Zverev’s third match point.

If you’re disappointed by Shapovalov’s loss, you might feel better after hearing the thoughts of ESPN’s Patrick McEnroe.

“For someone at his age to beat Del Potro and Nadal back to back I would say is a sign he’s got a big future,” McEnroe told Daily Hive on Friday.

With the semi final appearance, the 18-year-old is projected to move up to 67 in the world ATP rankings as of Monday.

Here are some quotes from Saturday’s post-match interviews.

Denis’ thoughts on his week in Montreal

“It was a dream week for me. I saved four match points in the first round and I just played loose after that. I beat one of my idols so it was just a dream come true for me this week.”

On what this week means for him and his career:

“It’s a huge jump from 144 to 67 (in the world ATP rankings). My whole life has changed in the past five days. I’m going from being not known to being known in the tennis world and in Canada.

“It’s going to be a bit of a change to me, I’m going to have to adapt. It doesn’t change things – I still have to keep working hard everyday.”

And on watching TV this week:

“I wasn’t expecting to hear my name every two minutes. It was like okay guys, enough, enough.”

Zverev, on what this week means for Denis’ career

“It was an amazing story and I think this is just the beginning of a very long story, so hopefully he can continue doing what he’s doing. On the other hand I will say don’t expect him to win the U.S. Open in the next month coming up. He still needs some time.

“For him to play this well consistently it might still take another two or three years. On the other hand he has shown what level he has and what level he is.”

I apologized for the fact that his entire presser was about Shapovalov.

“It’s fine… I’m actually happy you guys do because it shows that all of you are interested in Canadian tennis. I think every country to should do that for their athletes.”

What Zverev said to Shapovalov during handshakes after the match

“I told him he had a great run, well done to him, and to not worry too much he lost today because this is the first match of many I will play against him – hopefully a lot of big big matches maybe in Grand Slams, maybe in finals of tournaments.”

“Sascha’s an unbelievable player. He’s going to be a champion. Hopefully one day I can get to his level. He’s still better than me, but I’ll keep working hard and hopefully we can start a rivalry.”

Federer, on the prospect of facing either Zverev or Shapovalov in the final

“It’s exciting to have a player at 18 or 20 in the finals of Masters 1000 and it’s not something we’ve seen often, except maybe when Andy, Novak and Rafa were coming up.”

Zverev on what impressed him in Shapovalov’s game

“I was actually surprised at how quick he is. I knew he had big shots – a big forehand, a big serve – but his moving impressed me a lot today from side to side.

“I can play very aggressive and he was handling it quite well. That impressed me because I hadn’t seen it on TV. I witnessed it today.”

Denis, on if he’d be celebrating Saturday night

“I’m not sure, I’m going to have to discuss that with Felix [Auger Aliassime]. It’s okay though, he keeps me in check – he’s still underage so we can’t go out.

“We’ll probably just chill and watch some Fresh Prince of Bel Air. Can you believe [Felix] hasn’t seen it? He’s got the same hair cut as Will and he hasn’t seen the show.”

Zverev, on his passion for the game

“I’m someone who really enjoys and embraces that I’m not somewhere studying right now. I’m doing something that I love. Why would I want to do anything else?

Someone then asked what he’d be studying if he was in university.

“I was always good at math in school but I wouldn’t want to study math for the rest of my life.” (Everyone laughed.)

“No offence to those who do but I would be depressed at some point.” (Everyone laughed more.)

“Maybe science, nature, biology… sports, that’s it.” (If he was holding the mic, he would’ve dropped it. He got up and left.)