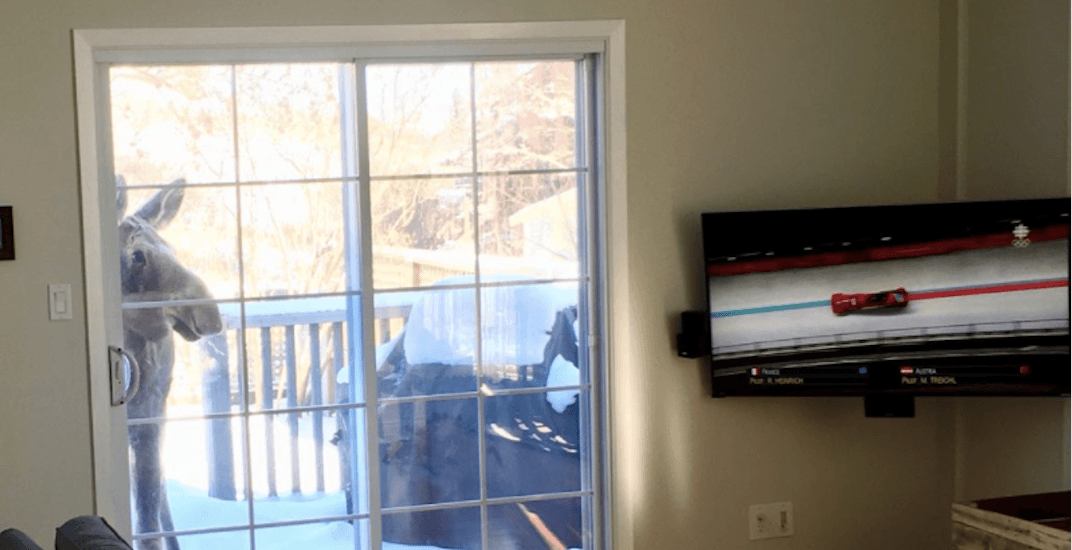 This moose in Calgary took in some bobsleigh action. (Matt Duncombe / Twitter)

It’s safe to say that the Olympics in PyeongChang are capturing the attention of Canadians across the country. And, this being Canada, our nation’s viewers include what else – a “friendly, neighbourhood moose” in Calgary.

In a tweet on Monday, Matt Duncombe shared a picture of some unexpected company that joined him to watch the Canadians in the bobsleigh competition.

“#CBCOlympics, Your coverage is attracting a diverse audience,” Ducombe wrote.

He then ended the tweet with the hashtag #MooseareCanadiantoo.

According to Duncombe, the porch-front visitor is a “friendly neighborhood moose, here in Calgary. Little fella was just looking for a bobsleigh update.”

Duncombe’s tweet, which has already been re-tweeted thousands of times, also prompted more than a few entertaining responses, including this beauty from Team Canada.

Plenty of others chimed in as well.

My buddy Melvin. He tried to make the team but they couldn’t get a helmet on him and he wasn’t gonna give up his inalienable right to have antlers intact. 🤔 ☮💜🇨🇦

Us moose know what’s up no matter what country we’re in.

The moose got his money’s worth out of the bobsleigh viewing visit, as Canada’s two-man bobsleigh team of Justin Kripps and Alex Kopacz picked up another gold medal for Canada’s third-ever Olympic medal in the event.