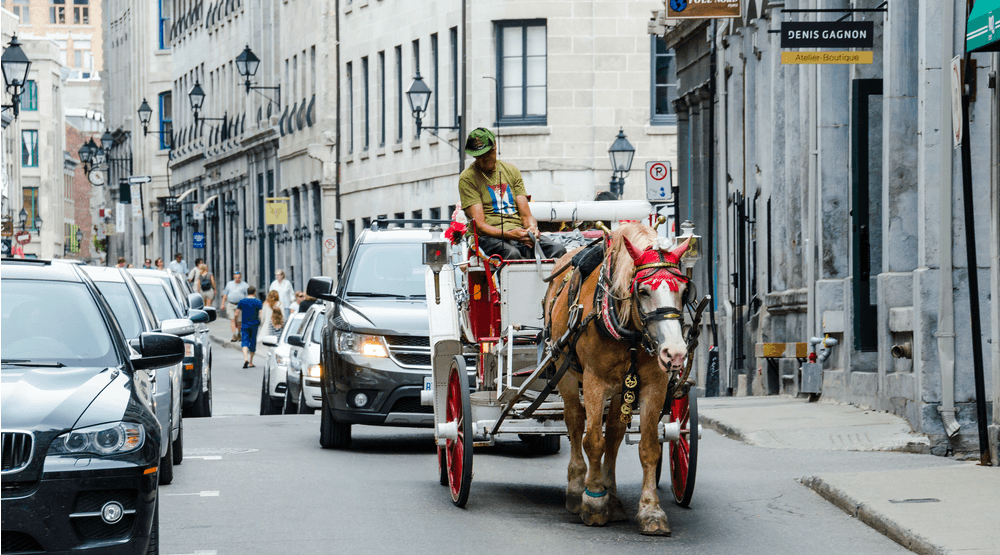 Montreal Mayor Denis Coderre announced Wednesday that he will be proposing a new bylaw to help improve conditions within the city’s calèche –or horse carriage- industry. According to the Montreal SPCA however, the new regulations would not actually improve things for the horses.

According to Sophie Gaillard, a lawyer with the SPCA, the new rules, if passed, will include a change to the maximum temperature in which the animals are permitted to work, from the previous limit of 30 degrees to 28 degrees.

Drivers will also have to provide animals with ten-minute breaks between rides, and horses will need to be microchipped for better monitoring.

In addition, drivers will have to undergo customer service training and adhere to a dress code. There will be no change to the maximum time a horse can be hitched up, which would remain nine hours per day.

“The focus seems more on improving the image of the industry,” says Gaillard. “The horses will continue to spend their days inhaling exhaust fumes, standing and working on hard surfaces that cause hoof problems and lameness, and they will continue to be exposed to the risk of collisions with vehicles.”

Last year a calèche horse was struck by a vehicle in Montreal’s Old Port. The year before, one slipped and fell in a construction zone. Last month in Quebec City, a calèche horse fell in traffic due to dehydration, and another was spooked off the road, all in one afternoon. “That’s not the type of thing that’s going to be prevented by better regulations,” asserts Gaillard.

Another concern for the Montreal SPCA is enforcement. “We know that the current  bylaw is not being enforced,” says Gaillard. “We always get complaints every summer at the SPCA, with photos and videos to show that horses are out there working in above 30 degrees.” Gaillard says the SPCA has also had communication with former drivers who have explained how operators get away with eluding current rules. “So we really questions whether these new regulations will even be enforced properly.”

After the mayor’s one-year moratorium on the industry last year was quickly lifted when drivers won an injunction in court, the city instead decided to invest $500,000 into improving the tourist attraction. But according to Gaillard, this is a major misstep: “This is all together investing in an industry that is outdated, tacky and cruel.”

The new bylaw will go to vote in August.