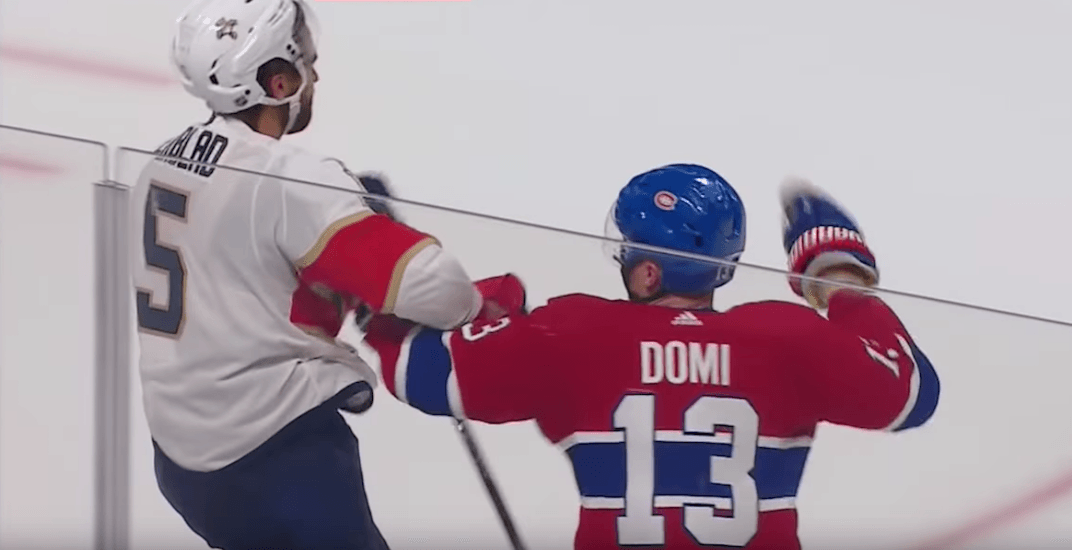 Max Domi made an impression with the Montreal Canadiens last night, albeit a bad one.

In his first game with his new club, the 23-year-old Domi received a match penalty after punching the Florida Panthers’ Aaron Ekblad in the face.

Just under a minute into the third period, with the Canadiens trailing by one, Domi tried to start a scuffle with Ekblad after the play was whistled dead. After the Panther defenceman didn’t take Domi’s bait, he shook off his glove and punched him barehanded in the face, dropping him to the ice.

After the game, the NHL Department of Player Safety announced that Domi will have a disciplinary hearing, slated for later today.

Montreal’s Max Domi will have a hearing tomorrow for roughing/ punch to an unsuspecting opponent against Florida’s Aaron Ekblad.

In an ideal world, Domi would have showcased a different aspect to his game in what was his Bell Centre debut as centre with his new team.

If he sits out as many as the remaining five pre-season games the Canadiens have scheduled, it will throw a wrench into the Habs’ vision of testing out Domi as a top-line centreman before the start of the regular season.

The Winnipeg native has a reasonably clean history when it comes to suspensions, having only served a one-game punishment for starting a fight with less than five minutes to play in March 2016, when he was a member of the Arizona Coyotes.

As for Ekblad, who’s already dealt with multiple concussions, the Panthers can’t afford to lose their top-line defenceman in an otherwise meaningless exhibition game.