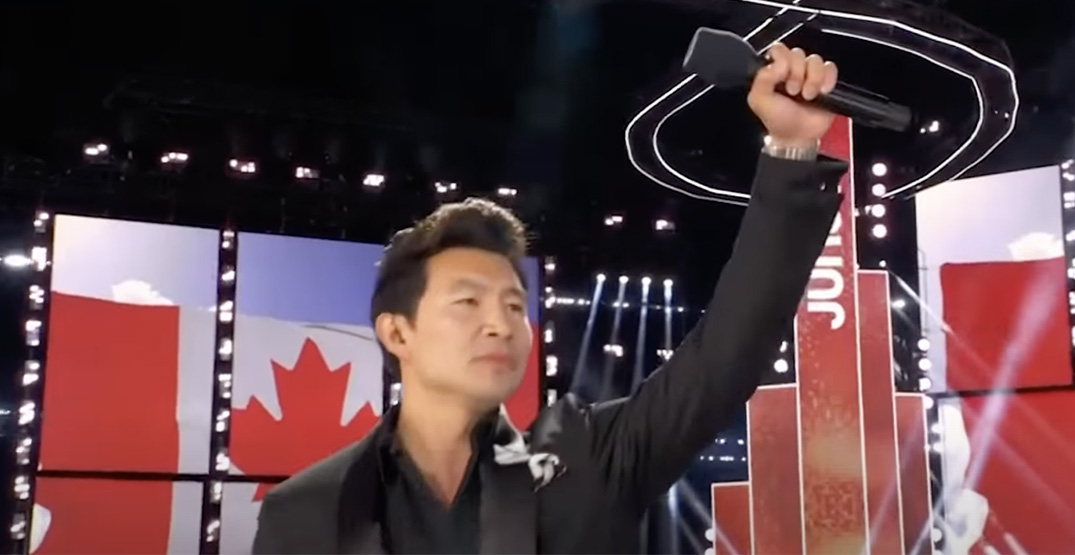 Simu Liu is the ultimate Canadian hype man, and he proved this with a rousing JUNOs speech on Sunday night.

The Shang-Chi star hosted the award show’s first in-person event since 2019, so he had to pull out all the stops for his opening monologue.

To do so, he took inspiration from a classic Canadian commercial from the 2000s.

“I’m not a curler or anything, but I know what it means to hurry hard,” Liu began, echoing the start of Molson Canadian’s early aughts commercial, “I am Canadian.”

For those who aren’t familiar with the reference, between 2000 and 2005, the Canadian beer company’s slogan was “I am Canadian,” and it pumped out ads that hyped up the True North. Liu’s speech is inspired by “The Rant,” in which a man named Joe gives a spirited speech about what it does and doesn’t mean to be Canadian.

The commercial makes a point of debunking common American stereotypes: “I say ‘about’ not ‘aboot.'”

Liu’s updated version of “The Rant” was just as inspiring. The Barbie star enlisted the help of comedians Leonard Chan and Julie Kim to write the monologue. The crowd cheered after every valid point he made about how awesome it is to be Canadian.

He gave a sly reference to Montreal’s younger legal drinking age: “I went to Montreal for my 18th birthday for the… wink, wink, culture.”

Of course, the Mississauga-raised actor had to give a shoutout to Toronto, and the city’s unofficial ambassador, Drake.

“My favourite thing about Toronto — the CN Tower and Drake, hashtag views, hashtag ‘Best I Ever Had,'” he said.

In a comment that was probably too soon for Leafs’ fans to hear, he noted that Canada also invented the pacemaker, “which we all desperately need because the Leafs keep giving us heart attacks.”

He did acknowledge that Canada isn’t perfect.

“In Canada, you can truly have anything — except for affordable housing. That one’s a tough one,” said Liu.

The proud Canadian superstar also gave an important shout-out to the food that raised him: ketchup chips, roti, Jamaican beef patties, and bubbletea (not boba!).

Similar to the original Molson Canadian ad, the host added jabs at America’s healthcare system and its questionable practices.

“Everyone is fam because Canada is a place where the government is also our drug dealer, and we’re into snowboarding, not waterboarding!” exclaimed Liu.

The proud Canadian added another quick jab at the US, referencing its controversial decision to reverse Roe v. Wade, which received loud cheers from the crowd at Budweiser Stage in Toronto.

He ended on a powerful note, just like the famous ad: “My name is Simu Liu, and I am Canadian!”

You can watch Liu’s full monologue below: