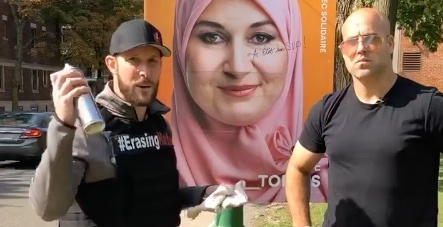 Fleischer, a Montreal native who owns a graffiti-removal business, removes hate crime graffiti for free. He claims that turning a blind eye towards discriminative graffiti makes him just as guilty as the people do the crime.

A video was posted to his Facebook page of him and a partner, decked out in #ErasingHate gear, cleaning up the vandalized election poster that two women were filmed defacing earlier this week.

The video has garnered over 88,000 views since Monday and lobbied that “signs with anti-secular hate speech have no home here.”

#ErasingHate claims to be the first movement of its kind. It targets, locates and eliminates hate speech graffiti anywhere in the world, free of charge.