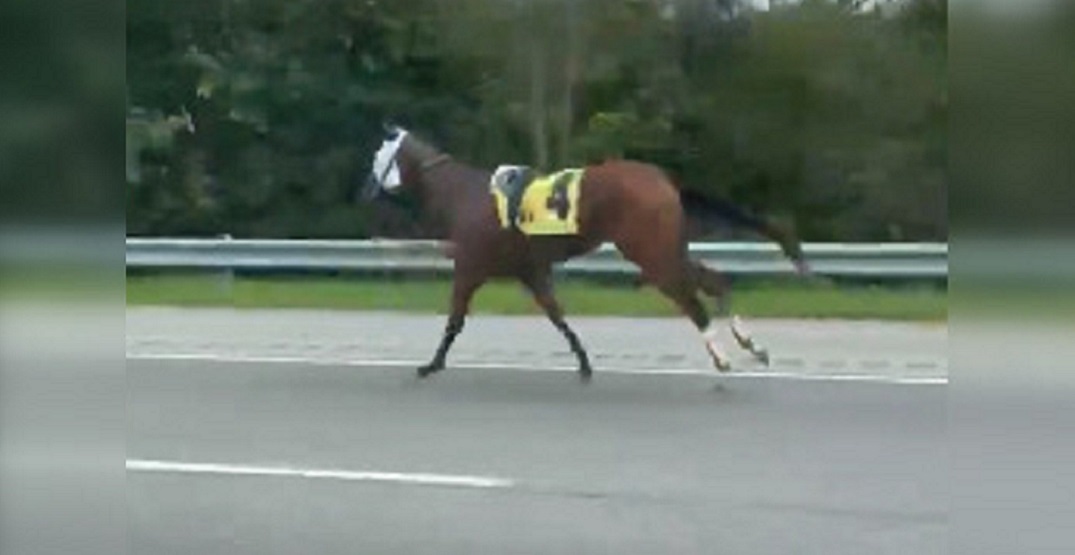 You can officially check “racehorse runs down highway after escaping from track” on your 2021 bingo card.

Just outside of Evansville, Indiana, that’s exactly what happened on Saturday, as a racehorse named Bold and Bossy escaped from the Ellis Park racetrack after dismounting its jockey and took off down Indiana highway 41, crossing state lines and entering Kentucky.

Just in: Ellis Park officials tell Eyewitness News a race horse bucked its rider and escaped the track before the first race this afternoon. It traveled along US-41 before the owner managed to rescue it at the Evansville Water Department. pic.twitter.com/YWbaklhDaO

“Only in Kentucky,” Waggener captioned the video.

Here’s another video of Bold and Bossy running around Evansville: pic.twitter.com/2n2ttGu37i

Bold and Bossy was eventually captured by a local sheriff and track officials and returned to Ellis Park.

Wildly, it wasn’t the only adverse event to happen this weekend in the Ellis Park racing circuit.

Sandlin also reported that Ellis Park’s receiving barn was “destroyed by fire” early Sunday morning, though thankfully it appears there are no injuries to humans or horses.

Ellis Park has canceled racing and training today after the track’s receiving barn was destroyed by fire early Sunday morning. According to General Manager Jeff Inman, no humans appeared to be in the barn at the time of the fire, and all seven horses are believed to be rescued.