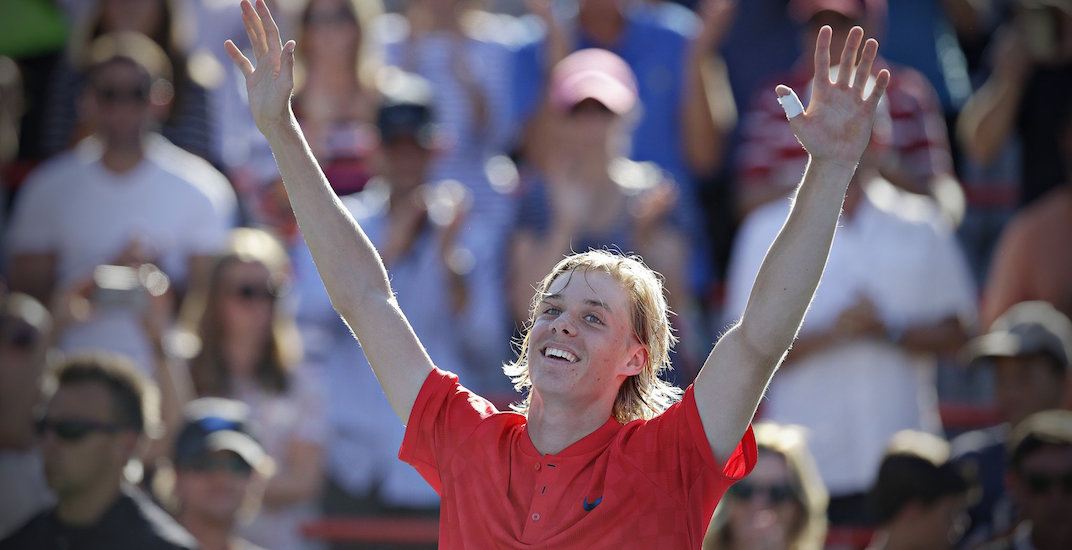 It was an up and down day for Canadian men’s tennis at the Rogers Cup in Montreal on Wednesday.

First the bad news: Milos Raonic lost his opening match to Adrian Mannarino. Worse, he’s playing with yet another injury – this time it’s his wrist. Raonic has fought with hip and back issues before.

The sixth-seed, Canada’s best hope for a title in Montreal, lost 4-6 4-6 to the world’s 42nd ranked player. As soon as the match began, it was clear things weren’t right with the 2016 Wimbledon finalist.

Raonic, known for having one of the best serves in tennis, hit just 54 percent of his first serves into play during the first set. Worse, the man who often runs his ace count into double digits each set managed only one over the course of the match.

After the loss, Raonic told the media he wasn’t able to practice properly in the days leading up to his match because of swelling in his wrist.

“I wasn’t able to hold a racket two days ago and that’s why I requested as many hours as possible before I stepped on court to play,” Raonic said at his post-match press conference, adding the injury is common for tennis players and he has dealt with it before.

Asked if he believes his wrist will heal in time for the U.S. Open at the end of August, Raonic said he’s quite confident it will: “I hope today wasn’t a setback and over the next few days I can continue to calm it down and get it under control as much as possible.”

While Canada’s tennis fans were upset with Raonic’s situation, they noticed another young Canadian male who is nearly ready to push his way into the upper echelon of the tennis world.

He downs Juan Martin del Potro 6-3 7-6 for one of the biggest wins of his life #CoupeRogers pic.twitter.com/Vhv8KeVyGt

More importantly, at 18, Shapovalov is the youngest male tennis player to reach the round of 16 at a Masters 1000 tournament since Rafael Nadal did it in Miami in 2004.

To earn the milestone victory he displayed a willingness to keep fighting – a mindset all great tennis players have. After winning the first set 6-3, Shapovalov immediately dropped his first service game of the second set, going down 0-2.

Instead of allowing Del Potro to coast and force a third set, Shapovalov fought, breaking back and then breaking once again at 5-5 for a 6-5 lead.

After Del Potro broke right back to force a tie breaker, he stole the first mini break for a 3-1 lead. Again it looked as if the match was destined for a third and deciding set.

“I told myself, look, I’m the underdog, I have nothing to lose,” he said of that moment afterwards.

“That kind of freed me up.”

Shapovalov won the next five points and eventually won the tiebreaker 7-4 to win the match.

Talking about why he’s more competitive now than he was at the start of 2017, Shapovalov said he’s had to mature quickly on the men’s tour. The young Canadian explained how hard he’s been working with his coaches on the mental side of his game, using the examples of how he fought off match points against Rogerio Dutra Silva on Tuesday and beat Del Potro on Wednesday.

Unfortunately for Shapovalov, his Rogers Cup road only gets tougher from here. On Thursday he’ll face No. 1 seed Rafael Nadal who dismantled another up-and-coming tennis star Borna Coric 6-1 6-2 on Wednesday.

On the prospects of that matchup, Shapovalov took the glass-half-full approach.

“It’s going to be very interesting for me to go up against [Nadal], just to see how my game style matches his,” he said.

“Obviously it’s going to be a really tough fight but I’ll try to make the best of it.”