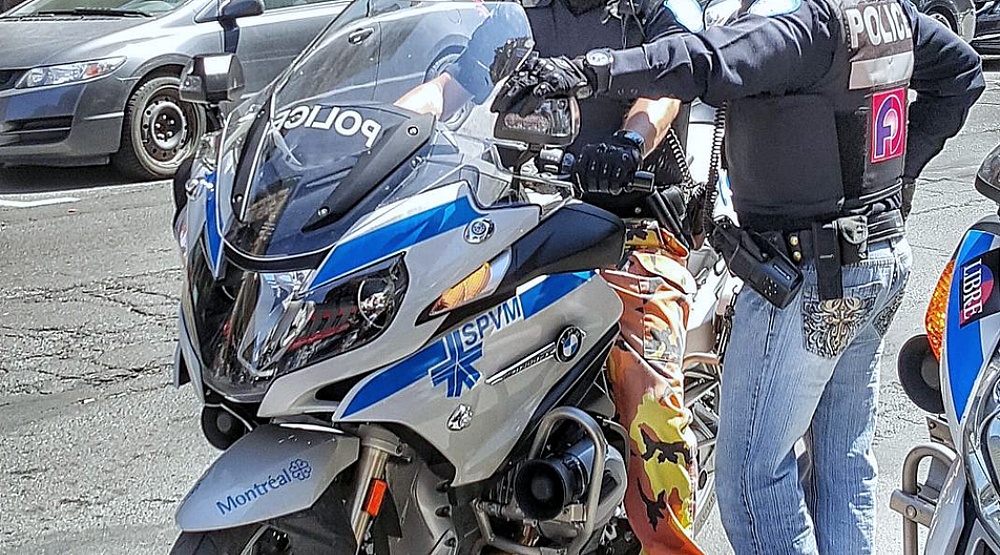 For the past two years, Montreal residents have resigned themselves to seeing our police officers walking around in non-regulation uniforms; as they opted, instead, for colourful and often ridiculous looking outfits, in an attempt to draw attention to their grievances regarding forced changes to their pension plans by the government.

When I found out yesterday that a judge threw out Marc-Olivier Caron’s $1,300 traffic fine, I breathed a sigh of relief. Mainly, because I hoped that we had finally reached a turning point and that the verdict (and the implicit acknowledgment that the police officer’s lack of uniform could have constituted a public danger because it prevented a citizen from recognizing them as a police officer), finally meant that the silly camouflage pants that Montreal cops have been wearing over the last two years may soon be a thing of the past.

Constable Nathalie Dagenais, of the Laval police department, was monitoring people driving down des Laurentides Boulevard in Laval last year when she clocked Caron going 71 km/h in a 50 km/h zone.

She stood in the road, in an attempt to pull him over, but Caron, unaware that she was a police officer, just changed lanes and kept on driving.

Dagenais followed him and gave him a $1,300-ticket for speeding and endangering the life of an officer.

Yesterday, Judge Martine Hébert threw that very expensive ticket out because she ruled (quite reasonably, I might add) that Constable Dagenais wearing pink, grey, and white camouflage pants, a red baseball cap, and a yellow vest that did not say “Police” on the front didn’t look anything like a police officer.

Caron testified that when he saw the woman walk out in the middle of the road, he was confused and with traffic behind him didn’t feel it was safe to stop. He simply changed lanes and kept driving.

The confusion Caron experienced mirrors the mass confusion many Montrealers have been experiencing. In the past two years we’ve seen police officers in camouflage, animal-print leggings, tartan prints, bright red or purple pants, and even full-blown mom jeans.

I’m here to tell you that nothing can dissuade me less from a life of crime than a cop in mom jeans. And the combination of too many unsmiling attitude-laden cops with a Rambo-complex wearing camo pants makes most of them look like army rejects who didn’t quite pass the entrance exam and now get to live out their military dreams at a downtown street corner, handing out tickets to unsuspecting Montreal jaywalkers, or – even worse – members of Ammon Bundy’s armed militia during their embarrassing Oregon standoff, which unceremoniously ended when they ran out of snacks.

Let’s face it, right now they look like rent-a-cops in charge of mall security. Good enough to perhaps break up a group of rowdy teenagers, but in no way capable of conveying respect and authority when dealing with serious crimes. Perception is reality and right now every time I cross paths with them I smirk. And I don’t want to.

Whatever your feelings about the police, there’s no denying that the uniform is meant to convey the power and authority of those who are supposed to “serve and protect” us. Police uniforms are immediate and easily recognizable visual representations of law enforcement and they have an undeniable and powerful subconscious psychological impact on us.

According to Richard Johnson’s article “The Psychological Influence of the Police Uniform”, “the police uniform is a symbol, a certification of legitimacy and a suppression of individuality. When police officers wear their uniforms, researchers say, the public believes they embody the stereotypical traits of all police officers and rate them as being more competent, reliable, intelligent and professional than people wearing other clothing.”

Now I’m not saying that’s always the case. We’ve had more than a few cases where police officers have proven themselves incompetent, unreliable, unintelligent, unprofessional, and only too eager to abuse their power (I’m looking at you, Constable Stefanie Trudeau). It’s also important to highlight the fact that depending on what your experiences have been in the past — and many from racialized communities would agree — the police uniform may inspire fear and mistrust. But that’s another conversation for another day.

Right now we’re just debating the effectiveness of this protest tactic. I’m fairly certain that, two years later, everyone in the city is aware of the Police Brotherhood’s grievances regarding the changes to their pension plan. What point does it serve to drag this out any longer? They’ve made their statement of protest and they’ve paraded around town eliciting giggles and eye rolls for years now. Hell, in a very un-classy gesture they even showed up in clown pants for former premier Jacques Parizeau’s state funeral so what else is there left to do at this point?

And while no one should be questioning the officer’s right to protest, as citizens we also shouldn’t have to be questioning whether we’re dealing with an actual officer or simply someone with an affinity for camo pants and red baseball caps. If, as the Caron case suggested, their lack of uniform and the public’s potential inability to recognize them as officers of the law constitutes a public danger, than it’s time to put an end to this protest tactic. I, for one, will be more than happy to see those funky pants retired. They’ve run their course and their effectiveness as a protest tool.