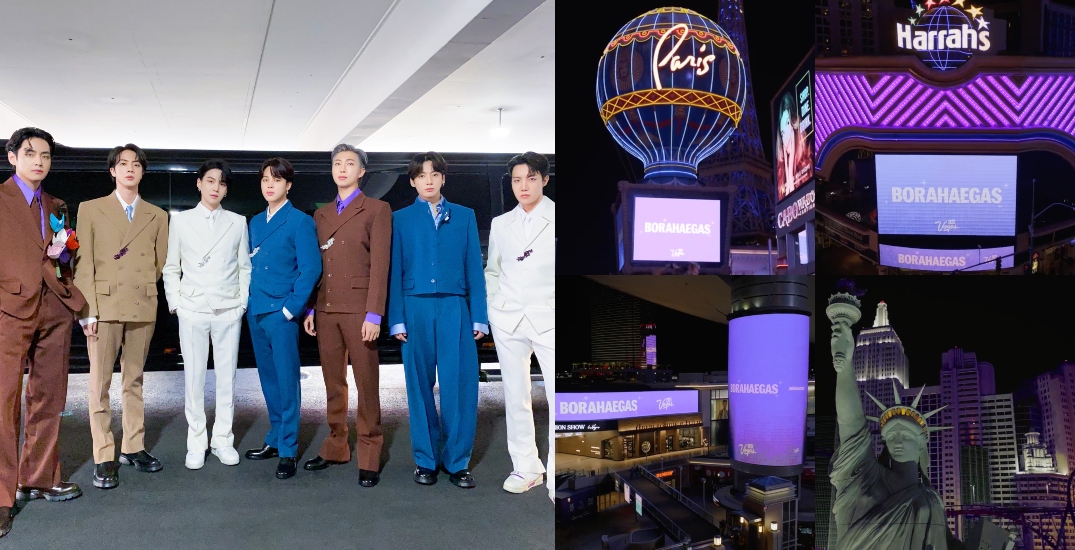 BTS has taken over Las Vegas.

The K-pop group is in the middle of their mini residency for their “Permission to Dance” concert, which kicked off on April 8, with scheduled performances at Allegiant Stadium on April 9, 15, and 16. And Sin City rolled out the purple carpet for BTS and fans (called ARMY) in true Vegas style.

From hotels to popular landmarks, the city has been lit up in purple.

Purple holds a special meaning for the group and their fans. BTS member V coined the phrase “borahae”, a portmanteau of purple and love in Korean. And Las Vegas is definitely getting into the spirit, with the city’s official Twitter account changing its name to “Borahaegas.”

Vegas has a new Persona, just for @BTS_twt ✨💜
#Borahaegas#PermissiontoDance#BTS_THE_CITY_LasVegas#PTD_THE_CITY_LV pic.twitter.com/Vl2z3e4pFO

And it’s not just merchandise booths that the fans have to look forward to.

Hotels were offering BTS-themed rooms (now sold out) and hungry fans can dine on BTS’ favourite Korean dishes like kimchi fried rice and jajangmyeon at Mandalay Bay with a menu by Michelin-starred chef Akira Back. There’s also a photography exhibit, a concert after party, and a fountain and lights show set to BTS’ music at the Bellagio.

To all those not in Vegas, we got you a front row seat at the @Bellagio fountains 😎💜
#Borahaegas#BTSARMY#PTD_THE_CITY_LV#BTS_THE_CITY_LasVegas pic.twitter.com/GcOEBgY2kd

Kim Tae-ho, COO of HYBE Corporation, said that a bigger event had been originally planned in 2020 for the group’s “Map of the Soul” tour which was cancelled due to the pandemic. The Las Vegas event had been organized shortly after the group’s Los Angeles concerts in SoFi stadium late last year.

“To be honest, we only had four months to prepare this project, quite a short time,” he said, according to The Korea Herald. “We’d embarked on it as soon as the SoFi tour successfully ended in December last year, after which we decided it would be a right time to revive the project in Las Vegas.”

He also addressed the looming issue about the compulsory military enlistment in Korea for men between the ages of 18 to 28, which would put BTS’ career on hold, saying that the group has left the decision to their company.

“And it’s true that the members have struggled a bit with the confusion, as they had to keep changing their plans according to the altering enlistment systems,” he said, adding that they’re “paying attention” to the changes being made by the decision-makers.

Last week, BTS were at the Grammy Awards where they performed a Mission: Impossible-themed version of their hit single “Butter.” They were nominated for the Best Pop Duo/Group category.